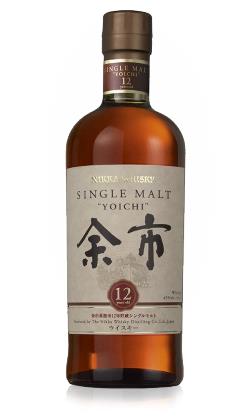 Japanese whisky legend Taketsuru founded Nikka's first distillery in 1934 in the town of Yoichi on Hokkaido, Japan's second largest island. The location was originally going to be used for Yamazaki distillery - but after parting ways and forming his own company, Taketsuru returned to Yoichi and constructed the Hokkaido distillery. The site was felt to have both conditions and climate comparable to that of Scotland where Taketsuru had studied and worked in the 1920's.

The first single malt from Hokkaido was not produced until 1984 - a 12 year old. Up until then, production had focussed on lower grades of Japanese whisky (they had and have different rules for production in Japan, and they're generally more flexible than in Scotland!). Asahi Brewing Corporation bought Nikka Whisky in 2001 and the distillery was renamed 'Yoichi' after the town in which it was located.

Nikka's core range of Yoichi expressions (10, 12, 15 & 20 year olds) all went bye-bye in 2015, being replaced by a single Yoichi NAS bottling. Today we'll take a look at what was a staple Yoichi single malt - the 12 year old expression.

Finish: Long with a freshening pinch of salt in the tail.

This is precise, measured and delicious – not a single rough edge to be found. But, at the same time, this is exactly the type of dram which makes me feel dismayed by current state of the whisky market. A few years ago this was one of the best ‘daily drinkers’ out there – now it requires digging into some deep pockets at auction to acquire a bottle….the whole time knowing that sheer greed has led to others hoarded garage-loads of this stuff. Tragic.

Still, even though this has moved into treat territory for most, it’s a good treat at that. Exemplar composition makes for a truly fruity whisky where peat smoke is a part of the story rather than the story itself. A truly terroir whisky for me and a lesson in balance and harmony.