Tomatin Cask Strength was released in 2015 and then swiftly rebranded into the new house style the following year. It’s a non-age statement bottling that has been matured in a combination of ex-Bourbon barrels and oloroso sherry casks. Whilst Tomatin are pretty generous with their ABV’s across the board, this one comes in true to its name at 57.7%.

Tomatin Legacy was launched in 2013 as the distillery’s entry-level non age statement whisky. It’s matured in ex-Bourbon barrels and then finished for around a year in virgin oak casks. When launched it’s RRP was £25.99, so it’s pleasing that in the four years hence, it has hardly increased for this reasonable entry point. You can find it on Master of Malt for £26.50. 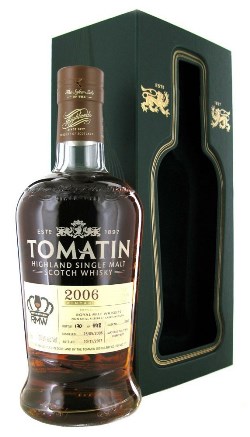 The Dramble took a look at the Tomatin Core Range, as well as interviewed the distillery’s General Manager Graham Eunson at the end of last November. Little did we know, that at the exact same time, Royal Mile Whiskies were bottling up their own Tomatin – in the form of a single sherry cask – for release the week after our distillery feature and tasting notes. A chance trip into London resulted in a visit to the RMW store (close to Tottenham Court Road tube station) and a new Tomatin to add to our liquid library.  We’ve not seen anything written about this store exclusive release as yet, so, snowed in last week, we thought we’d get our chops into it.

Tomatin 12 year old is matured in ex-Bourbon barrels and then finished in Spanish sherry casks for between 6 to 9 months. It was rebranded towards the end of 2015 along with the rest of the Tomatin range into a new shaped bottle with a more contemporary logo and an earthy colour palate. All of the rebranded bottles now highlight the distillery’s tagline ‘The Softer Side of the Highlands since 1897’.

Tomatin 14 year old was originally launched in 2014. When the entire core range was rebranded, the labelling on this bottle was updated to highlight it’s port cask finish. It’s been matured for 13 years in ex-Bourbon barrels and then has been finished in tawny port pipes for an additional year. It can be yours for £53.83 from Master of Malt.

Tomatin 18 year old has been matured in ex-Bourbon barrels and then finished in first-fill oloroso sherry. It’s bottled at 46% and is available for £75.55 from Master of Malt.

Times change. Tastes change. And unless you want to get forgotten by history, sometimes your whisky brand needs to change. We see brand makeovers all the time – a change of bottle design, a change of labelling – both seeking to alter the customer perception to one of modernity and relevance. Then there’s a change in stock policy or a change in production methods – a necessity to reaffirm the brand proposition and an ideal time to reinforce revised values. And then sometimes there’s a need for radicalism – not just a cosmetic change, not just a redrawing of the narrative, but a wholesale reinvention.

This 1988 Vintage is the third release in a series of expressions from that year. It’s been aged for 27 years, and includes a parcel of whisky that has been matured in first-fill Tawny port casks. It’s the first 1988 vintage to be bottled in the new Tomatin livery and updated glassware. 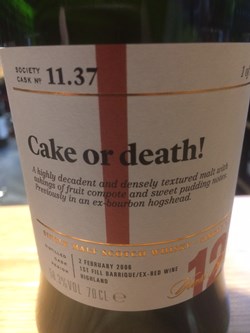 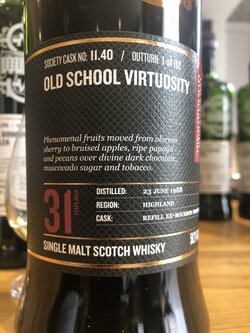 The oldest Society bottling of Tomatin to date. Laid down in a refill ex-bourbon hogshead in June of 1988 and bottled 31 years later.

Laid down in 2015 in a 1st fill oloroso sherry cask (#990461), this Skene Tomatin was released towards the end of 2020. Bottled at 50% and with only 185 bottles available (a smaller cask? Or cask share?) this release clocks in at a price which is eye-opening for all the right reasons - £35 from the J.L. Gill shop online. Woozers.

Boutique-y’s Tomatin 11 year old Batch 4 is another of the bottlers seemingly incognito releases – I can find no record of its existence outside of this smartly presented miniature. Previous batched have had a bit of age behind them with 21 and 16 years under their belts – this one heads into pre-teen territory with an offering that’s 11 years of age and bottled at 51%.

Phew. We’ve made it. A 24-day journey into the archives of the Boutique-y Whisky Company alongside a varied and entirely hodgepodge selection of daily ramblings of wildly varying quality. Thank you to everyone who has been dramming along with us each day and likewise a big, hearty thank you to Dramble friends for all the love and support you've show us over the course of yet another not entirely normal year – it really means a lot. We’re off now for a much-needed break to recharge the whisky writing batteries – so all that’s left for me to do is to wish you all the very best of festival seasons.