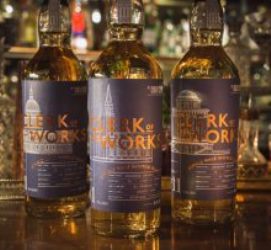 Originally established in London’s Spitalfield in 2006, Hawksmoor has developed a reputation as one of London’s best steak-houses. Now with four restaurants in the capital and one in Manchester, the chain offers meat and cocktail lovers a best of both worlds with high quality (and sometimes unusual) cuts of beef, and well thought-out unfussy cocktails. In each venue as well as cocktails, a selection of real ales and a surprisingly deep wine list, you’ll also find a fair number of whiskies from around the world behind the bar. In touch with the current whisky zeitgeist, Hawksmoor have decided to produce their own single cask bottling for their restaurants – this takes the form of the ‘Clerk of the Works’ - an 11 year old Ledaig.

The Clerk of the Works bottling was distilled in February 2005. It’s labelled as being distilled at Ledaig distillery, which at one time would have been correct, but the distillery was renamed to Tobermory back in 1979 (with Ledaig being used as the name for Tobermory’s peated expressions since 2007). Small details. It’s bottled at 48.9% ABV and is available for purchase at £95 a bottle, or, in the case of the Air Street branch of Hawksmoor - £9 for a 25cl measure – drinking in London restaurants never being the cheapest of pastimes. Whilst not specified, this almost certainly comes from an ex-bourbon cask.

Nose: Pretty huge, I could smell this quite clearly from several feet away. A pungent concoction of baked apples, sharp citrus, stone fruits and pronounced rubbery smoke. Meatiness – BBQ pork ribs and beef stock – sit alongside chalky limestone minerality and a firm coastal breeze. The smoke here is powerful – part TCP, kippers and brine, part molten tractor tyres, engine oil and fresh leather. A short period of resting brings out some earthy and vegetal aromas – moist soils and artichokes. A dash of water reduces the citrus tang and allows the stone fruits to take centre stage. It also pushes the peat more into rubberiness, losing some of the medicinal notes.

Taste: Clean and crisp with sharp lemony tartness which develops into oily peat, earth and herbalness. A solid arrival bring cutting lemon on the tip of the tongue – acerbic and already quite mineral. In the mid palate, it’s time for the smoke – very coastal, salty, seaweed and TCP-packed and fairly astringent. Bitter medicine indeed. Earthiness then prevails with musty walls, mosses and lichen. The addition of water beefs up the fruit element here adding fresh grape juice and slightly sour unripe apples. It’s fairly transformative in terms of texture, moving oiliness in to the realms of ash and chalk.

Finish: Short to medium, earthy and quite medicinal.

The nose on this Ledaig is formidable, almost daunting - if you’re not into your peat this is not the whisky to convince you otherwise. The palate is comparably more civilised, though lacking some of the complexity of the nose (particularly the meaty and vegetal aromas). As is often the case with Ledaig bottlings, it’s all rather idiosyncratic, but if you’re looking for some excellent steak and want to challenge your taste buds further, Hawksmore have got you covered.