Find out what it means to me

The barriers to becoming a whisky blogger are extraordinarily low. Nowadays, all that’s required is an Internet connection, some fingers to type with and some whisky to write about. But, at the same time, whilst almost anyone can (and seemingly does) write about whisky, to my mind, few seem to put in the effort to research and create thought-provoking content. And don’t get me started on Instagram ‘influencers’. Whilst many bloggers use the medium as an outlet for their passions and a way to connect with fellow enthusiasts, others seem to consider that they’re an integral part of the industry itself – self-important people – usually with an axe to grind. And then there’s press samples….

I’m not planning on opening the ‘seagull’ can of words once again – it has been a reasonable amount of time since I’ve seen or heard anyone directly requesting samples. But, rest assured it still happens in some quarters of the whisky blogger world. I take a rather prosaic view of review samples – I feel they’re both a useful and necessary part of whisky marketing, but that they also come with an agreement. An unspoken contract that exists between the writer and the distillery/agency that denotes a level of respect:

Over the years, I’ve seen a wide variety of bloggers come and go…..Sample-chasers: unaware and unwilling to put in the many many hours of ‘work’ it takes to create interesting and engaging content. Zealots: with well-meaning, but monolithic intentions to never review any bottle unless they’re full 70cls and only ever purchased with their own cold hard cash (N.B. most quickly realise that financially this is wholly impracticable). Samples are there to broaden horizons. They assist brands with generating visibility and content (be that good, bad or indifferent), and they assist bloggers with what always was, but is increasingly becoming even more so, a very expensive hobby.

Perhaps it feels like I’m blowing my own trumpet when I say this, but I spend far more time writing about whisky than I do actually drinking it. That’s not to say that I’m not regularly drinking whisky (including press samples!), but that I find as much joy in the creation of content for The Dramble as I do in exploring the aromas and tastes of the liquid itself. It’s the diversity of the industry, the people, the art, the science and the product which I find fascinating – not the visits from the whisky sample fairy.

Talking of samples, it’s been a little while since we wrote about Boutique-y Whisky, but a new blogger initiative called ‘Dram Good Club’ has just been launched to present writers with some regular updates on what Atom Brands’ three Boutique-y imprints (Whisky, Rum and Gin) have been releasing. 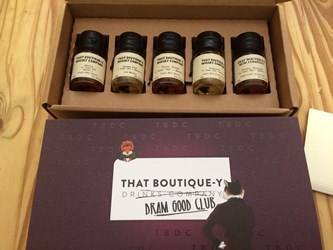 Boutique-y’s first batch of Teaninich was released at the end of 2018 in the form of a 19 year old. No distillation year is provided, so one just has to guess that it was produced when people were partying like it was 1999. 862 bottles have been produced at an ABV of 48.6%. A 50cl bottle will set you back £66.95 from Master of Malt.

Taste: The arrival is syrupy and presents a somewhat unusual combination of tart fruits and metal polishes – Lemon peels, grapefruit segments and pear juice alongside Brasso and Autosol. The mid-palate is reflective of the nose – all breakfast and patisserie – rolled pastry, rich tea biscuits, croissants and hot cross buns. Wood lacquer and white pepper bubble into the back-palate alongside dusty earthiness. Reduction brings out a juicy side to the fruit elements, adding grape, gooseberry and green pepper, however this comes at the expense of the overall definition, which is less vibrant.

Boutique-y Whisky’s first bottling of Teaninich is a very pleasant patisserie-forward affair. It offers fresh, effervescent fruit, supported by delectable sugar-infused bakery flavours. However, it’s rather hydrophobic, rapidly losing form and poise when in the presence of even a little dilution – so you should consider sticking to it at 48.6%. Well-priced by Boutique-y standards (which have escalated to the upper end of the IB market over the past few years), and a good introduction to Teaninich’s naturally bright and fresh style.