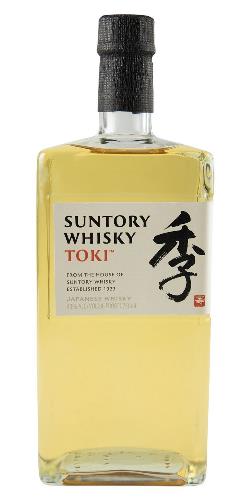 Toki doesn’t literally translate from Japanese to English as ‘time’ (it’s more about the precise moment when things happen), but it’s nevertheless a similar concept that Suntory have taken in the naming of this blended whisky. Released for the US market in 2016, and somewhat plugging the gap left by the discontinuation of the Hibiki 12 year old, Toki is a slightly different Japanese blended whisky – both in its components, and how Suntory are suggesting it be served.

Watching the slickly produced #tokitime video on the official site: https://www.suntorytokitime.com/ it is clear that Suntory are not positioning this as a straight-up no ice required blend. Indeed, much has already been written about the whisky highball and how it, and the mizuwari (whisky with water) are much more popular and common ways to consume whisky in Japan. Toki is a product of all three of Suntory’s distilleries – Yamazaki, Hakushu and Chita. But, unlike many of the company’s blends that use (and have used in the past) the rich flavours of Yamazaki to set the overall direction of a  blended expression, Toki is primarily grain driven. Chita forms the basis of blend and then whilst both Hakushu and Yamazaki malts are present, it’s the floral notes of Hakushu that are more prominent.

Toki is bottled at 43% ABV and can still be obtained in the US for a reasonable price (I.E. one which you’d not worry about mixing it into a highball with). The same is sadly not true elsewhere. Over in the UK you’re looking at around £80 for a bottle….so some pretty expensive highballs then. Which is a real shame, as frankly, Toki is at its best when made into a longer drink. Here’s what we found when we tasted the Toki neat out of the bottle:

Nose: Fresh, light and inoffensive.  Foam bananas and peaches provide a fruity opener which develops and heightens in the glass over time. There’s a fair vanilla influence here and some subtle but perceivable florals – pine and cut grass. Everything is wrapped up in sweet grains and with a generally creamy aroma. Simple stuff, but entirely pleasant.

Taste: Obviously young and grain-forward. There’s still some rawness, copper and glue flavour in here. The mouthfeel is reasonable, but not hugely coating. Starting fairly sweet, this offers up more apple orchards than the nose which is more stone-fruit/tropical. Light citrus peels provide a touch of zing and are joined by vanilla and oak – the wood giving some pepperiness and ginger.

Finish: Short to medium in length with some residual sweetness. Apple flavour lingers along with slight astringency and gentle pepper.

In its straight up form, there’s nothing wrong with Toki, but it’s very simplistic, and fairly unexciting (our score is, as always, based on the spirit itself). However, mixed into a highball (I’d go with a ratio of 1:3) it makes for a very refreshing long drink. Still not complex, still not deep and bold, but tasty nonetheless. There within lies the problem. Suntory has produced Toki to be drunk long. Suntory has positioned and promoted Toki to be drunk long. But, unless you’re in the US (where you can find it for around £25) it is bloody expensive to actually do so.