An era that taste forgot?

Whilst the biggest concern for any dedicated whisky enthusiast should always be the quality of the liquid itself, bottle design also has a part to play. It can reflect the overall brand of the producer and distillery, can help a bottle stand out on a crowded bar shelf, and in some cases even influence the way you experience a whisky. Whilst many new and recent Japanese whiskies have been produced in what you’d commonly describe simply as a bottle, back in the 1970s and 80s producers created a huge array of more unusual glassware and decanters. Often created to mark special occasions, distillery birthdays, golf tournaments and industry conferences – there’s a veritable treasure trove of older peculiar containers – and some are much more visually attractive than others.

Special Reserve was first released in 1969 to commemorate Suntory’s 70th Anniversary. Originally produced in a dumpty style bottle, it carried no age statement and was bottled at 43% ABV. Bottles created during the 70s carried the label ‘A Rare Blend’. Bottles produced during the 80s were described as ‘A Supreme Blend’. Later versions dropped the ABV down to 40%, but added a 10 year old age statement. Along the way, a fair few special editions were produced, and for these, Suntory decided that a standard bottle was simply not special enough for its customers. I hope you’ve left your sense of good taste at the door….

Here’s a particularly repellent example from 1983. From 1973 through to 2007, Suntory sponsored an annual event held at Sobu Country Club on the Japan Golf Tour. For the 83 event a 760ml ceramic penguin was produced. I’m not sure anyone really understands why.

This one is even more odd. A 760ml brown box with two ceramic moulded kilns added as a lid. Who would want this as pride of place on their bar? Perhaps when empty, it has additional utility for trips to the petrol station? 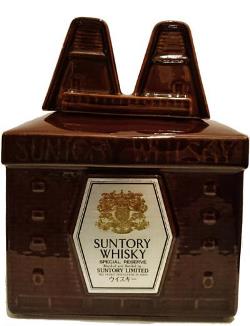 This one is much more attractive. For the International Science & Technology Expo held in Tsukuba, these exceptionally cute, but rather impractical 200ml birds were produced. 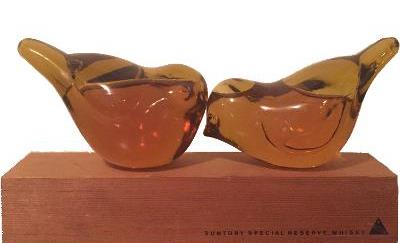 My bottle of Special Reserve is another of the more funky ones. It’s a 660ml ceramic decanter that’s shaped like a book (with a moulded spine and pages down one side). From a distance it’s not altogether unattractive, but up close, when you realise that the lid (the top section with ‘Suntory Whisky’ written across it) is made from cheap plastic, it does rather lose some of its charm. The bottling, like the other special editions, is produced at 43% ABV and as a Suntory blend will contain malts from either Yamazaki and Hakushu (or both) and grain whisky from Chita.

Nose: Fudge, dried berries and chocolate – an immediate rich sherry influence is obvious (so clearly some Yamazaki is in play here). Coffee, leather and a touch of incense are wrapped up in an array of dried and fresh fruits – prunes, rum-soaked raisins, figs along with plums and oranges. There are hints of shoe polish and varnish running through this as well as barley water, and some good nutty and bakery qualities – hazelnuts, croissants and both sweet and slightly salty pastries. Dusty spicing is present – it’s a touch prickly with nutmeg, ginger and pepper.

Taste: A soft arrival packed full of toffee, fudge and chocolate. It’s very sherried and quite woody too. Burnt sugars, light liquorice, spent coffee grounds along with maple syrup. The development is quite swift, moving from sweet flavours straight into savoury spicing – umami-tinged pepper and ginger along with cough syrup. The back palate is a little lacking – this is all very much up front.

Finish: Medium in length and with some mild oak bitterness, but tons of freshly made espresso.

Suntory Special Reserve is a fairly simplistic whisky, but it’s a very pleasant one at the same time. Whilst the crazy decanters might suggest that the liquid contents could a little left-field, this is far from the reality. Quality sherry casks, and well made-spirit are at the heart of a solid blend that is just as good drinking neat as it is in a high ball or mizuwari. Alas, this is not easy to find outside Japan, and if you do, the price might put you off diluting with soda or water. Nevertheless, it’s a piece of history that’s well worth seeking out at some point, whether it comes in a novelty container or not.