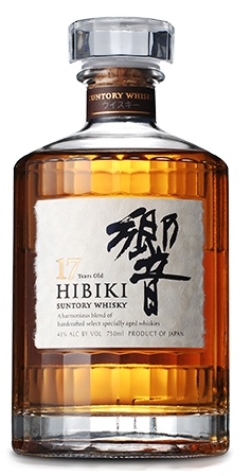 Whilst the discontinuation of Suntory’s Hakushu 12 year old was met with resigned sighs worldwide, I’m not sure that most folks felt the same way about Hibiki 17 year old. For several years now you’d rarely see Hibiki 17 out in the wild (and if you did, your eyes would pop out of your head at the price tag) – though I’m sure there are plenty of closed examples within the growing number of liquid museums worldwide. Allocations have been so limited (and buyers so quick) that for all intents and purposes, outside of auction houses, this bottling might as well have been discontinued already. So, when the official announce came last month, I exhibited not an ounce of surprise.

Within the last week, Suntory broadcast some slightly more positive news – a new Hibiki expression – Blender’s Choice will be released on 4th September. Described as blend of selected vintages, the new bottling’s composition includes wine-cask aged whiskies – perhaps a slightly different spin on the established Hibiki flavour profile? Alas, this is currently slated as a Japan-only release for the time being.

This leaves the Hibiki range in a peculiar place, there’s two NAS’s – Harmony and Harmony Master’s Select – and then a gulf of a gap up to the 21 year old. Very few are going to move from these introductory bottles up to what now costs at least £500 a pop.

Hibiki 17 year old is a whisky that I went out of my way to acquire – though fortunately quite some time before the world went crazy for anything even remotely Japanese whisky-like. Having been enticed by the 12 year expression (which was the first to be discontinued in 2015), at the time the 17 year old was the next obvious progression. Similarly to most Suntory blends, its composed of malt whisky from Yamazaki, Hakushu and grain whisky from Chita. Unlike more recent blended expressions such as Toki, Hibiki focusses more on the character of Yamazaki.

Taste: A syrupy arrival that’s got plenty of weight for 43% ABV. Orange blossoms and orange peels (quite unrelatedly) sit with tangerines and nectarines and our already identified tropicals – mango and banana. Starting sweet, but gradually souring in the mouth throughout the development, these also lend the whisky some progressive dryness. In the mid-palate, the grain element can be discerned – bright corns and maize alongside brass polish. It’s exceedingly well integrated. Woodiness runs throughout the whisky (though whether this has been in mizunana I’m unsure – possibly a time/packet of whisky) and expresses both sandalwood and spices – gently ginger, more pronounced cinnamon.

Hibiki 17 year old is quite lovely. There’s oodles of character here, from the inviting nose, through to a lovely fruit-driven development. There’s also plenty of balance and poise – every component being exactly how it was designed to be. Whilst the NAS Hibiki expressions feel somewhat manufactured (albeit generally well manufactured), at this age, the blend starts to feel much more naturally composed and confident. Of course, with the discontinuation, acquiring this outside of auctions is now akin to hunting unobtainium – and it has been far from easy (or cheap) for a number of years already. In the writing of this article I checked the most recent auction price for this bottling and found a jaw dropping £380 (plus fees). Quite lovely, but now quite ludicrous.