It's dark Jim, but not as we know it 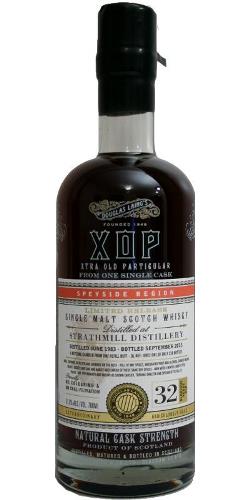 Single malt from Strathmill is an unusual thing – other than a Flora & Fauna release from a few years back, if you’re looking for a Strathmill, you’re going to be exploring independent bottlers, and even these are not an overly common sight. The lesser-known distillery is part of Diageo’s expansive portfolio and has the distinction of employing purifiers on both the still lyne arms and condensers. These supposedly lead to the development of a light, fruity and grassy whisky.

One look at today’s whisky and your first thought is probably not going to be light, fruity and grassy. In the bottle it’s dark as treacle looking more like Worcester Sauce than whisky. Distilled in June of 1983 and bottled 32 years later by the every-reliable Douglas Laing, this Strathmill comes from the bottler’s XOP (Xtra Old Particular) range of whiskies. Of course, we’re taking sherry here – 258 bottles from refill butt DL10912 at an agreeable 51% ABV. So, a huge dark sherry bomb right?....or is there something more interesting going on here perhaps?


Nose: Sherry is naturally the order of the day, though the immediate aromas are of wood and heavy spice. Deep chocolate and coffee grinds mix it up with rum soaked raisins, stewed plums and some very dark cherries. There are notes of wood glue (PVA), polish and leather which hint at the age of this whisky, though overall the focus here is more on rich fruits and sweet sherry affections than it is on raw aged character.

Taste: A well balanced and engaging mouthfeel which bring with it some cavernously dark sherry notes – chocolate cake littered with cranberries, cigars and molasses. Cask spicing can be tasted throughout and is highly peppery. Less polish and leather, now earthy with some notes of dunnage warehouses alongside a rather meaty ‘hung ham’ which seems to provide texture as much as it does flavour. Water brings forward more of red fruit and reduces some of the peppery bitterness.

Finish: Fairly long and at the same time fairly astringent (with all that oak spice this is no surprise), again presenting a large kick of black pepper.


This Strathmill shows more elegance than most heavily sherried malts. There’s great balance across the fruity notes and real depth to more cask-driven undertones of oak and spice. Surprisingly, given both its incredibly dark colour and 32 years of age, there’s a lot less polish, leather and ‘older notes’ than you might have initially expected. The highly spiced peppery astringency may take some getting used to – especially for those looking for sherry-led saccharine sweetness – you’re not going to find that here. This dram demonstrates that big sherry doesn’t always have to result in a big sherry bomb - sometimes the end result can be surprisingly sophisticated.