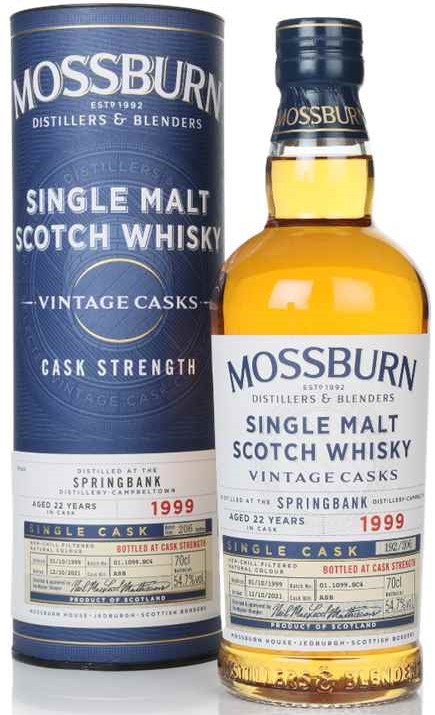 As a reviewer you need to be quick off the mark to pen your thoughts on a new bottle of Springbank before the thing has all but vanished from the shelves. And when that situation extends to what was once (but arguably aren’t now) the distillery’s core range products, you invariably find yourself either writing about the just past or penning words about the fairly depressing future where things are notionally still available – only now at twice the price they were last week. Rather like filling up the car or obtaining the weekly shop - just far less actually consumed as intended.

Adoration of Springbank is nothing new. Once a cult, always a cult. Writers, both amateur and professional have been pontificating about the distillery’s unassailable appeal for years. However, unlike demolished or mothballed distilleries where supply is limited by now locked-in history – Springbank is still very much alive. Indeed, the distillery produces far less LPA than it physically could. The contention from owners J&A Mitchell being a combination of anxiety of changing the profile of its feted distillates – or simply an aversion to spending money. Last time I was on-site there was an orange-sized hole in wash still No.1's lyne arm - vapour quite literally dissipating into the atmosphere. Only at Springbank.

It is likely those attitudes to traditional production that hold high appeal to die-hard whisky fans. As well as feeling authentic and being largely devoid of modern marketing flimflam, the results of this ardently-minded approach naturally feed into the styles and qualities of the spirit being produced. Whilst perhaps not quite as consistent as it was 10 years ago – nevertheless, Springbank still has a reputation for reliability.

However, I would argue that the distillery’s increasing unobtanium is now also considerably adding to its long-standing appeal. We're rapidly moving away from just cultish devotion into widespread, potent idolatry.

Springbank possesses the perfect conjunction for whisky hysteria – limited supply, burgeoning demand and two armies of fans. The first: long-standing stalwarts romanced by the distillery’s story and its outputs. The second: Pokémon collectors who cannot but help to be enticed by what everyone else is doing. Gotta catch me one.

The first group have existed in whisky longer than I have. But the second are one of whisky’s newer phenomenon’s. Whilst it would be wrong to broad brush these folks are opportunists and/or speculators (those both absolutely exist in abundance within this group) – this fandom frequently puts the acquisition of what others view as unobtanium near the top of their hierarchy of needs. It’s a status thing – “look what I got” – but it’s also absolutely driven by the warping effects of social media and the perceived need to be 'seen'.

It’s human nature to enter any type of pursuit or hobby and to aspire to the others around you. No one should be expected to feed off of the dregs of humanity. If folks are spending all their time and effort obtaining bottles of Springbank, that begets other folks doing exactly the same. It’s simply keeping up with the Joneses. This is how we’ve got to a situation where people are fighting over acquiring what was once a sub £35 10 year old. And indeed, I’d argue this is why reviews of said 10 year old have been tending ever upwards with their scores and praise over the last few years.

In many ways this suits Springbank just fine. Cult appeal will most certainly allow the distillery to protect its legacy and to ensure that their (local) employees don’t have to worry about their monthly pay cheques. But it presents everyone else with a highly uninviting proposition – what does it cost, who can get it and how do they obtain it?

J&A Mitchell should be applauded for not allowing their prices to reach the skyward levels that many distilleries have and will continue to push toward. However, in keeping their original prices low, they have produced something of an Achilles Heel within the market – there’s just too much additional scope for others being able to charge more, and too little output for fans (of all flavours) to be seemingly able to resist the mesmeric effect of something being hard to try and even harder to obtain. The net result is a clear weak spot that has been and will continue to be exploited.

I see only three things breaking this cycle:

1) A sudden and consistent fall in production quality (seems unlikely)

Cult brands and products often look to elicit an emotional reaction from customers by guiding them to find deeper meaning when buying a product – the notion that the brand/product is remarkable different from everything else currently available. However, I’d argue that this is far from the case with Springbank. Whilst the distillery may seem happy to continue making and selling whisky their way (as is their right) – and this naturally provides the perfect environment for frenzied behaviour – it is us as the enthusiasts (no matter how well meaning we are) who propagate the cult ever further into the realms of unrealistic idolatry where keeping up - not enjoying the liquid - becomes the only game in town.

Mossburn’s first foray into Springbank is still available. At a considerable markup over its £370 odd RRP. Quite the sum to begin with for a 22 year old whisky – but there you go (you honestly might do better at auction for this as opposed to paying some of the more unscrupulous retailer markups). The release consists of 206 bottles at 54.7% ABV drawn from a bourbon cask and was released earlier this year.

Nose: Palpably greasy with an assortment of melting butters, waxes and mineral oils. Cooking apple is preserved with both lemon and a sugar dusting, whilst leafy greens and earthiness sit alongside sackcloth and limestone. Smoke is ultra-distant – a wisping leaf mulch fire 4-doors down. Reduction adds some broadness to what was a perfectly limited experience. Almond paste and royal icing (we’re close to wedding cake, but we don’t have the fruit and mixture, so no cigar) together with reduced, sweated orchard and stone fruits.

Taste: A more archetypal Springbank profile now. Not quite as oleaginous as the nose implies, but still tangibly weighty. Mentholated, well-polished oak, copper tubing and lacquer together with sweet green and yellow fruits and a sustained drizzle of sugared lemon water. Smoke asserts itself far more freely now – earthy, mulchy and a touch ashy – together with a prickle of ground black pepper. Dilution retains the texture for days – there’s a lot of ABV elasticity here. Lamp oil and syrupy fruits join cinnamon, nutmeg and developing back palate minerality.

Straight out of the bottle Mossburn’s 1999 Springbank doesn’t offer any particularly ground-shaking plot twists. It’s an almost unassuming tale that puts delicate expressiveness and elegant structure to the fore – and potency into its footnotes. And that’s no problems at all – it has an anticipated, but still nevertheless captivating story to tell. The addition of water teases out some new plot developments with an additional broadness that sits perfectly with the still front and centre distillery character. Lacking the muscularity of many SB bottlings, but not the stylishness – nor the all but inevitable high asking price.