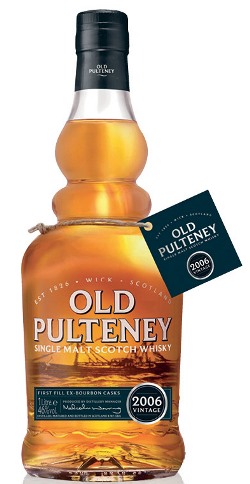 Old Pulteney announced a trio of new travel retail exclusives last month – a  2002 single cask for the 2018 Viking Whisky Fair, a 1990 Vintage (previously a London Heathrow only bottling) and a brand new 2006 Vintage bottled entirely from ex-bourbon American oak casks. Unlike some distilleries who seem to like to announce bottlings weeks or even months before they arrive in stores, I manged to pick up the 2006 Vintage just four days after the press announcement – a very timely business trip indeed.

Pulteney has been producing travel retail bottlings for some years now – but with these three new releases, there’s not a fishing boat or lighthouse in sight. I’m quite fond of vintage releases, and it’s pleasing to see Inver House taking a leaf out of their Balblair playbook with these new Pulteney bottlings. The 2006 Vintage is a marriage of ex-bourbon casks from the same year (no prizes for guessing). Bottled at 46% ABV, the release was created at the end of 2017 resulting in some 11 year old whisky from the Wick-based distillery.

Nose: Fresh and decidedly coastal. Sharp lemon zest, green apples and coconut shavings sit alongside salted caramel, malt and barley and some buttery pasty aromas – scones and custard cream biscuits. Smooth vanilla, marked salinity and a firm coastal breeze run throughout. The addition of water lessens the zing of the fruits and salt, and adds in some woodiness, but it’s arguably much more successful when kept at 46%.

Taste: Sweet and salty. Medium bodied with some slight oiliness on arrival, it initially delivers lemon, grapefruit and orange peels and zest – sharp and fresh, but also with caster sugar sweetness along for the ride. The malty biscuity notes detected on the nose translate through to the palate well, with croissants and brioche sitting courteously with sweet malted cereals. Sweet coconut and vanilla also come through, and are tempered by the Pulteney house-style saltiness and some distinctive minerality – rock pools and shale beaches. Water softens everything up and adds some fruity barley water into the mix, but as with the nose, I’d not say this was an overall improvement.

Finish: Medium in length and sweet with vanilla, but also slightly bitter with oak and cask char.

Old Pulteney 2006 Vintage is a solid entry in the distillery’s ongoing affinity with travel retail bottlings. No frills, no whacky finishes, just straight up ex-bourbon maturation from a range of well-selected 2006 casks. The OP standard bottling strength of 46% suits this expression well, and therefore I’d personally go at it right out of the bottle rather than looking to dilute down with water, which lessened the definition of aromas and flavours across the board.

As a travel retail bottling you get a whole litre of this, which, when equated to the price of £55 is pretty good value indeed. Though it is certainly reminiscent in style to the previous travel retail Noss Head expression, it’s altogether much more successful. You could do a lot worse than this if you’re looking for your next airport whisky purchase.