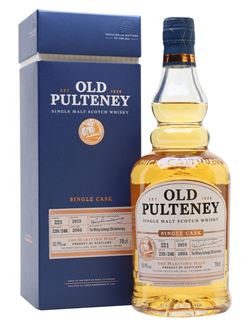 I often see people use ‘spirit character’ and ‘distillery character’ interchangeable – but to my mind they’re very different concepts. Spirit character is the profile of the liquid before it has undergone maturation – the underlying base aromas, flavours and importantly texture, which have been fashioned from the ingredients used, and in particular, from the fermentation regime (which is where many esters are created). It’s something which can, and in my view should, run through every eventual whisky which a distillery produces. A perceptible DNA which binds whiskies together no matter their cask type and no matter their age.

At least that’s the plan. Of course, life is rarely so simple and whilst the base spirit might possess a near timeless consistency which those of us blessed with particularly well-developed olfactory systems (which tends to be females – an interesting genetic story for another day) can detect, once wood is involved things can become much more convoluted. Sometimes the spirit character can be lost to the oak.

When you start delving into single casks, this vagueness is often magnified. Stick two ‘identical’ casks next to each other, fill them on the same day, come back in a decade, and you’ll likely find some radical differences. And whether or not that underlying profile remains true and detectable is often a moveable feast.

And this is where the concept of distillery character can be introduced.

No matter the underlying spirit profile, all distillers have their own methods for moulding and bending spirit into a particular profile of eventual whisky – the primary method of doing this is, of course, through the cask. Take a look at Glengoyne, Macallan, Tamdhu – whilst their spirit characters differ wildly, I would posit that their distillery characters are all much more closely tied. Their mutual use of sherry casks is a fundamental driver (or in the case of Tamdhu, a sole driver) of the style of resultant whisky. That’s not to suggest that they all taste the same – far from it – but the utilisation of sherry casks binds them together on top of their original spirit character.

The ability to take spirit character and transform it into distillery character (ideally without the loss of the former) is part of the true art of whisky making. It’s about understanding the facets of the distillate and shaping it sympathetically through the maturation process. You’ll often see this done exceptionally well - layers of additional cask flavour and maturity added on top of a recognisable spirit. But, equally, you’ll also see this done heavy-handedly and poorly - the cask (particularly when it comes to those with higher activity levels) pummelling the base profile to a point where regardless of how tasty the whisky is, it bears little resemblance to its origins.

This might all sound like liquid pedantry. What does any of it matter if the results are simply delicious?

And, if that’s what you’re currently thinking, then come back to me once you’ve sampled several hundred toffee and vanilla-led Speysiders.

Homogeneity might well produce a sea of tasty liquid, but given the individuality of the distillates being produced around the world, shouldn’t we be striving as much as possible to be retaining their underlying spirit uniqueness? Quality distillate is there to be nurtured as the building blocks of fine whisky – the moment we start treating it like a pre-cooked ready meal, is the moment when we start to lose aspects of the personality which makes whisky both so diverse and so distinctive.

The third of four recently released Whisky Exchange exclusives comes in the form of a single cask Old Pulteney – a distillery that I consider to have a very well-defined spirit character in terms of its bright lemon with coastal salt profile. The bottling was released last week and comes from an ex-bourbon barrel (#221), which was laid down in 2004 and then matured for 14/15 years before being bottled by TWE a few months ago. 246 bottles have been produced at an ABV of 50.9%. They’ll set you back £110 directly from The Whisky Exchange.

Taste: There’s solid texture here with both juiciness of fruit and creaminess of spirit – all reinforced with mineral pangs. It’s also rather the journey, opening on white grapes, melon and lemon peels before heading to the bakery with sponge cake, vanilla buttercream and iced buns. The mid-palate offers cask spice with both salt and pepper, before re-emerging into chiselled rockiness with plenty of metallic zing and a sprinkle of citric sherbet to liven. Finally well-judged oakiness straddles the palate, fresh, sappy and pleasantly drying. Reduction does not offer radical transformation, but does emphasis further the three flavours area – fruit juice, confectioners/baking sugars and rockiness.

Finish: Medium to long in length with sponge cake served with a side of shipped cream whilst ground pepper is joined by fresh mint leaves.

A tremendously memorable single cask pick. Bright, expressive fruitiness, well-judged sweetness and tangy minerality – all perfectly in tune with one-another. The intricacy is not especially high, but the balance and drinkability are on-point. And, importantly, the underlying Old Pulteney spirit character is most certainly present and correct here.