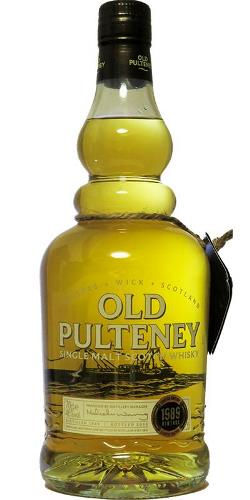 Tasting whiskies which have already won awards is a tricky business. It’s all too easy to be either be disappointed when the expected existential experience fails to materialise – or simply to forget, that at the end of the day it’s all a matter of opinion, and in the case of whisky awards, that opinion was probably not yours. Old Pulteney’s 1989 Vintage took the gong of ‘World’s Best Single Malt Whisky’ at the 2016 World Whisky Awards. This is no mean feat if you cast your eye over the wide competition it was up against.

The 1989 Vintage was bottled in 2015 making it a 26 year old. It was matured in second fill American oak ex-bourbon casks, but, somewhat unusually, the ex-bourbon casks employed here previously held heavily peated whisky prior to their filling with unpeated Old Pulteney spirit. The 1989 release follows on from a prior 1990 Vintage (ex-bourbon and ex-sherry casks holding predecessor peaty liquids) which was bottled as a 23 year old in 2013.

Nose: A juxtaposition of typical Pulteney coastal notes with an atypical peat influence. Apples, pears and a pang of citrus (more lime than lemon) make up the immediate fruity elements. You wouldn’t say that the peating is heavy, but it is ever-present and offers a decent waft of smoked mackerel and iodine. With the expected Pulteney salty edge, the concepts of briny waters and sea breezes both really comes across strongly. There’s some vegetal and floral notes here – grasses and perhaps fennel (liquorice certainly). Mild polish confirms the age of the malts in play here, and a copper coin-like minerality adds sharpness.

Taste: Oily and viscid with a real silky mouthfeel. Lovely. Hay, malts and oats all come through strongly with our limes adding a degree of sharpness. Fruit moves slightly into the tropical side of things with pineapple – BBQ pineapple when you factor in the smoked component, though peat is certainly less pronounced here than on the nose. Grape juice and gooseberries provide tart fruit, but underlying honey adds just enough sweetness to complement these perfectly. The coastal qualities are heightened on the taste as the underlying Pulteney spirit takes a firmer hold over the peated cask – salinity, brine and sharpness rather than earthy and smouldering.

Finish: Long finish, where peppery wood spicing comes out to play. Fairly astringent and drying with a salty tang reinforcing the coastal nature of this whisky.

Old Pulteney 1989 deserves your time and respect. If you’ve tried OP in the past you’ll come into this dram with expectations – hold those for a few minutes and allow this whisky to take you on its full and intriguing journey. All the anticipated OP notes are here, but they're gift wrapped in something somewhat unexpected. Don’t allow your taste buds and preconceptions to focus too much on the peated notes alone, spend some time and dig deeper to associate these into the core characteristics of the OP spirit and you’ll find that the marriage is really rather clever and sophisticated. I’ve had a bottle of this on the bar for quite some time now – my initial tasting (drinking, not thinking!) found this to be delicious, but not very Old Pulteney in style. Further tastings have proven me wrong (though I would suggest that allowing the bottle to breath a touch does provide enhancement) – such is the subtle complexity of this whisky that it espouses both quality coastal-led spirit with sympathetic smoking in a manner which in some ways feels more maritime than ever before.

The 1989 Vintage sold out reasonably quickly due to its limited release – top dog at the World Whisky Awards in 2016 elevated the desirability of this whisky into the stratosphere – and therefore onto auction sites. If you’re an Old Pulteney fan, I’d certainly say this is a must try, however the differential between the release price (£130 from memory) and what you’ll have to pay for a bottle now at auction is severe. Find a friend or trade for a sample - it's the Maritime Malt2.