One year older with Old Pulteney

Well-aged Old Pulteney is not something you’ll see every day of the week. The maritime malt is available in many different guises, and there are sporadic independent bottlings of all ages to seek out, but bottlings that have been matured over 30+ years are a fairly infrequent sighting and are much harder to come by. But, there are options, and as is often the case, they’re provided to us by the ever-excellent Gordon & MacPhail.

As it was my birthday this weekend past I decided that something special and unusual was called for – one quick, and surprisingly close Twitter poll later, and this 1984 31 year old Old Pulteney was selected as dram du jour to kick start my celebrations. Thanks guys, don't mind if I do.

In 2015, myself and The Dramble Co-Founder Danny visited Old Pulteney and stayed at MacKay’s Hotel in Wick. Run by the incomparable Murray Lamont, it quickly became clear that his family had a long-running connecting to not just Wick, but also with the Maritime Malt. Lamont owns several older casks of Pulteney, (some of which he'd inherited from his father) which the passing whisky tourist can purchase either in the Hotel itself, or next door in Bin Ends the wine and spirits shop which he also owns (he's quite the local entrepreneur). During our stay we tried countless Pulteney’s both official and unofficial, including a seriously sherried 1972, 37 year old which was also bottled by Lamont for MacKay's Hotel bar. But, it was this 1984 bottling which impacted me the most during our time in Wick. Bottled in 2015 at 31 years of old age, non-chill filtered, and drawn from cask number 10107 (which produced 134 bottles total). Happy Birthday to me.

Nose: Vibrant and dynamic presenting honeycomb, Seville oranges and the expected Pulteney sea breeze, backed up by some serious aged notes of heavy furniture polish, tobacco and wisps of undisturbed dunnage warehouse. Mild, but hard to place herbalness. Pencil shavings and roasted nuts hit the lighter end of the spectrum but are underpinned with deep woodiness, tanned leather and rich exotic spicing. Oddly, resting the glass doesn’t enhance the composition of the nose. It brings forward more honeyed notes, but lessens the overall flavour impact.

Taste: Silky and oily in the mouth and offering much more immediate salinity and pepperiness – cask forward here. Oranges again, but with some sharp citrus notes freshening it up. Even more polish and leather now and our herbalness has manifested itself more outwardly into eucalyptus. Still very woody, but with the cask spicing and coastal edge dialled up a notch. A decent rest in the glass increases the sweetness and fruit, but adds astringency.

Finish: Medium in length and very peppery, but not particularly tannic. Sitting for 30 minutes does bring out some dryness here.

An excellent Old Pulteney that manages to balance spirit and wood with just enough liveliness and distillery character to be hailed as pretty damn excellent. Contrary to the commonly held notion that older whiskies need to rest and unwind some of their tightness, this one seemed ready to go straight out the bottle – 30 minutes relaxing in the glass brought forward sweetness, but actually dulled some of the more interesting flavours. For those interested in older Old Pulteney this is well worth seeking out. Around £220 when bought in 2015 - I've never seen one at auction to date. 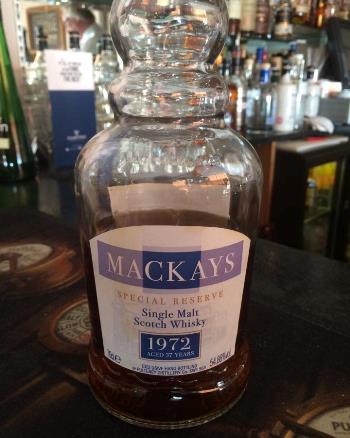 Oh and here's the 1972. If you're up at MacKay's Hotel trying the 84 you probably should explore this one whilst you're there!