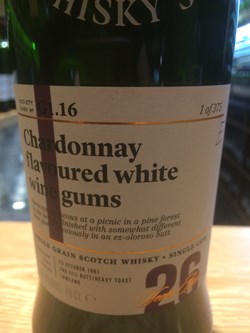 Middle-aged grain from North British, but with a bit of a twist – 25 years in an ex-oloroso butt followed by a finishing period in a 2nd fill butt with a heavy toast and medium char. A pretty high ABV on this one considering the age. Sweet & spicy profile.

Nose: Sparingly devoid of the typical acetone/glue aromas that pervade most grain whiskies, this delivers linseed and sesame oils, golden syrup and peanut brittle. There’s some sherry influence at play with coffee grounds and marzipan. Woodiness is still perceptible, but older and more relaxed – almost resinous. Water brings out wine gums (yes, the white ones) and juicy sugariness.

A solid North British that really comes to life when reduced – at that point, the combination of oaty cereals and wine-like sweetness marry together nicely.