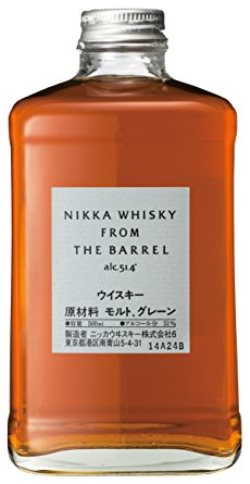 Bottle Name: Nikka From The Barrel

Whilst new Japanese distilleries such as Akkeshi, Nagahama, Kanosuke and Sakurao are potentially heralding the dawning of a golden age for Japanese whisky, current stock levels (and unwavering demand) have reduced much of the category down to a near bare bones offering – especially outside of Japan. Age-statement whisky from Japan is largely the purview of the rich and auction houses, and unscrupulous producers (and a lack of sensible legislation) have allowed the proliferation of a wealth of new Japanese whisky, that isn’t actually Japanese at all. Nevertheless, there are still some gems out there – they might not possess age-statements, or serious cache – but they’re still well worth seeking out. Nikka’s From the Barrel is one such whisky.

From The Barrel is composed of three main elements – malt whisky from both Yoichi and Miyagikyo distilleries and grain whisky which is also produced at Miyagikyo distillery, but using their pair of large Coffey stills produced by Blairs Limited. The components are married for between 3 and 8 months (in what Nikka themselves describe as ‘used casks’ – so potentially just ex-bourbon) and then bottled at the higher strength of 51.4% without an age statement. Bottlings come in 50cl as standard – I believe this presents issues for countries who don’t currently allow this size (which is neither a full bottle, not a direct half). But, in the grand scheme of things, this whisky is widely available.

From the Barrel is batch produced – as of writing there are nearly 100 different examples (differentiated only visually via a bottle code on the bottom right of the front label). For transparency, our review sample was extracted from the bigger 3L version produced for the 80th anniversary of Nikka (yes, my wife loves this whisky that much). You’ll still see a few of these giant special editions around – though you’ll certainly be paying quite the premium for the oversized glassware, valinch (which is 100% required given the weight of the bottle) and wooden stand.


Nose: Commencing with lots of orange – juice, peel and blossom – but there are other fruits here too – apricot and touches of pineapple. Sweetness is quite toffee driven, but there’s also candied almonds and some biscuity aromas. Underpinning all of this is creaminess that’s rather akin to warmed milk and marshmallows. Woodiness is quite prevalent  here – fresh oak and just a slight hint of vanish (giving away the grain element of this blend) – the cask influence adding a good kick of ginger into the mix. The addition of water removes the vanish note, adding in coffee, nuttiness and gentle cinnamon.

Taste: A slightly oily arrival that is quite impactful at 51.4%. Fruit first – oranges, tangerines, apples and peaches – a mixture of fresh and tinned – alongside some zesty citrus. These are, quickly followed by a development which moves into intensely spiced wood (pepper) – again, there’s slight varnish here. Throughout the palate, pronounced earthiness and milk chocolate. Reduced, the effect is similar to the nose – removal of vanish and the introduction of coffee beans, creamy milk and biscuits.

When it comes to good quality Japanese whisky, there’s not all that much left at affordable prices – Nikka from the Barrel proves to be one of the exceptions. Other than a slight vanish aroma/flavour, you’d be hard pushed to peg this as a blend rather than a malt. The composition is well thought out, balanced and quite expressive – 51.4% really delivers a lot of weight and flavour. Given the ABV, this is not adverse to a little water – indeed, just a few drops really helps to even things out. That all being said, even this bottle has seen its price increase – I remember my first purchase being around £25 – now, this is encroaching on £40 for a 50cl bottle (though you’ll sometimes see special offers). Nevertheless, when looking at Japanese whiskies in 2018 this still represents one of the better value, and importantly, obtainable bottlings.