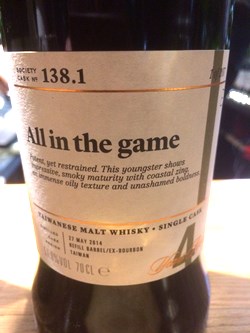 For those new to the party, the Scotch Malt Whisky Society labels its bottles by a not so secret, secret code – initially introduced so that members sampled whiskies without the preconceptions of knowing which particular distillery the liquid hailed from. Over time, I’ve found that my obsessive whisky brain has learned and memorised many of them – no doubt forgetting other pieces of more useful information as a consequence. In 2012 there were 132 different codes. In early 2017 there were still 132 different codes. But, in the three years since, six new distillery numbers have been added to the Society’s books. This week the latest of these new additions has been unveiled. It’s not from Scotland (though not doubt there’ll be a raft of new fledging distilleries in the mix in the future) -  138.1 ‘All in the game’ is from Taiwan. No, it’s not that distillery.

When you mention Taiwanese whisky, thoughts invariable turn to Kavalan. But, whilst Kavalan was founded in 2005 (producing its first spirit in 2006), Nantou distillery, three hours’ drive south west was founded way back in 1978 – the best of vintage years for whisky writers. Despite its age Nantou did not produce its first whisky until 2008 – and even then, the mash, wort and wash were produced by a local brewery for the distillery’s initial releases.

Fast-forward to 2010 and four stills from Rothes-based Foryths, a German-designed tun and washbacks were installed and distilling got underway in earnest. The first (proper) bottlings from this new regime were released in 2015. The distillery is run as a state-owned venture by the Taiwan Tobacco and Liquors Company (TTL) – the official organisation owns seven distilleries, two breweries and a variety of cigarette factories across the country – it maintained a total monopoly until 2002. Nantou is the only TTL site making single malt presently – production only takes place between October and April, and as far as I’m aware, the malted barley that is utilised is still imported from Scotland.

Until 2018 Nantou was largely known for its ‘Omar’ single malts – to date I’ve only previously sampled two of these - 46% ABV ex-bourbon and ex-sherry cask expressions, which, as far as I can tell are the mainstay expressions available outside of Taiwan. However, the distillery has produced a wide array of cask strength single cask releases – including oddities such as maturation in lychee and plum liqueur casks. These higher strength releases sell out quickly  - but you’ll occasionally see one of two at auction.

Earlier this year Nantou released three new expressions bottle under the new ‘Yushan’ brand (named after Taiwan’s highest peak) – one blended malt and two ‘Signature’ single malts (ex-bourbon and ex-sherry). It’s not clear whether Yushan will be replacing Omar as Nantou’s brand, or whether it’ll be spun off as its own separate label. Perhaps the distillery is eying the wider world whisky market with a view to capitalising on the general interest in Taiwanese whisky that has been spearheaded by Kavalan?

The Society’s first bottling of Nantou is interestingly delivered within the peaty flavour profile. It’s a four year old drawn from a refill ex-bourbon barrel and bottled at 57% ABV. 207 bottles have been produced, though those wanting to nab a bottle will need to enter a members’ ballot for the opportunity. SMWS have recognised the allure of .1 bottlings and have moved away from the fastest finger first approach for new distillery releases – there’s no 100% fair way to divvy these up, so to my mind, this is about as good as it gets. You win some you lose some.

Nose: Rather vegetal – plump olives, leafy greens, bell peppers and an assortment of unripe ‘green’ wine notes. Fruitiness is part tropical with paprika dusted pineapple chunks and part patisserie, with bakewell tart and peach cobbler by screaming for just a bit more limelight. The smoke is dirty and industrial – engine oils, axle grease and a sprinkling of caraway seed. The addition of water brings out sweetness with unrefined raw sugar and an assortment of baked goods – buns, rolls and swirls.

Taste: Dirty and vaporous. There’s an abundance of mechanised oils and lubricants here backed up a some sharp iodine-led phenolic cloud. Granite cliffs and shingle beaches provide a little coastal influence, whilst crackerbread and malt loaf add some savouriness. Reduction introduces sharp salinity and fresh sea water (despite Nantou being located south of Taichung City in a location you’d never describe as coastal). It also reveals some of the tropical fruitiness detected the nose, alongside tarry burnt meats (maple smoked bacon and roasted ham).

Finish: Long, with persistent gaseous smoke and an increasing overt dry oakiness.

The Society’s first outturn for Nantou is impressive for its four years of age. It’s only really the finish, with its overeager application of drying modern oak, that gives the game away as to the youthfulness of the spirit. The character here is rather interesting – a juxtaposition of fresh lively greenery with murky almost engineered peat smoke – it’s a combination I’d sometimes liken with particular bottlings of Bunnahabhain’s Moine or Tobermory’s Ledaig (sans the molten rubber). As a 1st edition SMWS bottle, this doesn’t come cheap - £85 for a four year old is stiff going. But, whilst we wait to see whether the Society have purchased, and will be releasing, more casks from Nantou, I can certainly recommend you explore a dram of 138.1 'All in the game' if you get the chance to.