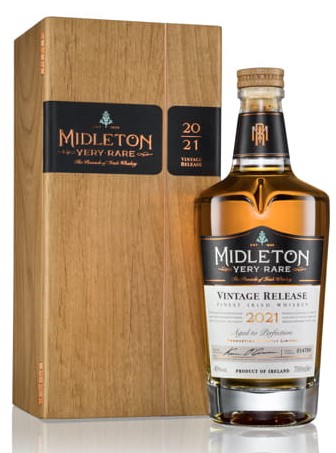 The saying goes that it is easier to follow than to lead. But this adage was taken from a time when it was assumed that everyone naturally always wanted to ‘be the boss’. The world’s greatest dance partnerships do indeed have a leader – but there’s nothing about that role that intrinsically requires more skill, more thought or more natural ability than that of the follower. And for Midleton’s new Master Distiller Kevin O’Gorman, I dare say that following (Brian Nation and Barry Crockett before him), is both an immense privilege, but also something of a Gordian Knot.

Barring a few exceptions, creators no matter their craft are all followers of a sort. It is only possibly to push the boundaries through knowing where those boundaries actually lie. Creators draw their inspiration from those who came before them – and in doing so, perhaps one day will then stand on the shoulders of giants.

In whiskey terms, the variables of blending spirits into an amalgamation which presents as greater than the sum of individual parts are extraordinarily broad. But they are far from endless. This palette is always limited by both the inventory of casks available (and future stock lay down) and likewise, often by the sometimes-big shoes of those who came before.

Kevin has worked in the whiskey industry long before taking on the mantle of Master Distiller. As Head of Maturation, his knowledge of the depths and breadths of Midleton’s stocks are unlikely to be paralleled by many at the Cork-based site. And yet in stepping up into the role vacated by Nation he becomes – at least until he’s stamped his own mark on the role – both leader and follower.

In his own words, Kevin has spent the months since his appointment looking for the “best of distillation and maturation” within Midleton’s casks – to craft this year’s edition of Very Rare, but also undoubtedly for other expressions which may come to fruition as bottlings in the future. This process of sampling – hundreds of cask extracts – is not nearly as easy a job as it might sound. Particularly when you look at what has become something of a set and expected character for the annual Very Rare releases.

Very Rare is, and has been, composed of a blend of grain and pot still whiskies – all matured in a variety of ex-bourbon casks. Whilst the profoundness of Midleton’s ageing stock should not be underestimated, at the same time, the room for Kevin to manoeuvre here is somewhat limited. Sherry, port and potentially even other oak variants are likely entirely out of scope for Very Rare. There’s a profile here which is assumed by consumers and likely also ‘budgeted for’ in terms of the stocks set aside specifically for the creation of this yearly release. Kevin as the architect of the 2021 Very Rare has a very fine box of pastels – but by no means does he have access to every single colour available.

Of course, each Very Rare - even under Nation’s stewardship - comes with its own intricacies. It’s a recipe which keeps the punters coming back each and every year. However, for each subsequent Master Distiller it becomes tougher and tougher to craft a Very Rare expression that truly stands as unique in its overall profile. The casks are broad, but they’re all from the same side of the street. As such, the elevation here comes not from the selection itself, but from the amalgamation. The blend of ages, casks and grain and pot distillates - and the resulting level of poise is what will mark out one year’s Very Rare over and above another’s.

In becoming Master Distiller, Kevin steps into the shoes of both Nation and Crockett before him. And that brings with it expectations. Expectations which require expressions to follow the Midleton’s ‘style’, but at the same time to come with an O’Gorman’s spin and stamp on them. I don’t envy this task – it’s not easy being both a follower and leader.

Kevin’s maiden Midleton Very Rare edition – the 38th release in the range - is composed of single pot and single grain whiskies that were aged between 15 and 36 years of age. All were matured in ex-bourbon casks, but whereas past formulations have included 3rd fill casks in the composition, this year’s edition is drawn solely from 1st and 2nd fill, whilst the grain element has been amplified with an (unspecified) increase in prevalence this time around. The release - as always - is bottled at 40% ABV. It is available in Ireland (online sales direct via Midleton’s website appear to have sold out), before hitting the shelves in the UK, US, Australia, Germany, France and Canada over the coming months. The RRP is the same as last year at €180.

Taste: The arrival is a textured delivery of oils and spices, but this weight quickly subsides in the mouth – nevertheless, for 40% there’s more body than most expressions at this ABV. Peaches are the first order of the day – freshly picked, pureed to add to a Bellini and transformed into appetising oven-baked cobbler. Then, light notes of crisp cereals and golden barley from the grain component, before a selection of typical pot still spices are joined by dry earthiness and asides of grain chocolate.

The nose on the 2021 edition of Midleton Very Rare is a rare treat – a masterclass of equilibrium of both distillate types and of varying casks. This harmony extends into a grand entrance on to the palate, but then cannot be entirely sustained for the remainder of the experience. Minimum bottling strength (I’ve said this every year) is a real issue for this high-end whisky – not only because of its discordance from what a modern-day luxury whisky is perceived to (and should) be – but also because this anaemia translates here into a notably short finish which pushes the grain element right to the fore at the expense of the more luxuriant and fruit-forward trad pot spirit. Don’t get me wrong, this is still a pleasure to drink – but at the same time I can’t help but feel that I’m left wanting just a little bit more from it.