Rare get a revision 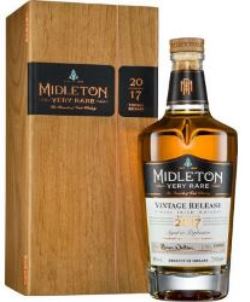 The annual releases of Midleton Very Rare are always highly anticipated, and shortly you’ll be able to pick up the latest edition with a new, smart presentation style. Very Rare has always been positioned as a premium Irish whiskey, but despite consistent high interest, and much praise for the liquid itself, few would suggest that the wooden coffin box that has accompanied the blend over the past 33 years was anything more than functional. The redesign is quite a radical departure compared to the bottlings of the past three decades. It’s already available in Ireland, the US and Canada and will be rolled out to other markets, including the UK from next month.

The 2017 edition has new look packaging, as well as a redesigned bottle shape that takes its visual cues from a writer’s inkwell and pen nib (OK, if you say so). A new modern guise for this venerable Irish blend is certainly welcome, but, as is always the case, we’re more interested with what’s inside the bottle. The latest Very Rare is a blend of ex-bourbon barrel single pot still and grain whiskies aged between 12 to 32 years. It contains the oldest whiskies used in the creation of Very Rare so far – 32 year old grain, selected to provide ‘lighter floral perfume notes’ and 26 year old pot still included to bring ‘a wide spectrum of typical spice character’. It is still bottled at 40% ABV as with all previous editions.

Nose: A warming and welcoming combination of vanilla and toffee is reinforced by well-defined fruitiness – lemon peels, red apple, melon and a host of stone fruits – apricots and peaches in particular. The fruitiness is further enhanced by a short period of resting. Underneath the orchard there’s both delicate florals as well as some more savoury herbs – sage and rosemary. Wood is carefully managed offering light varnish as well as gentle baking spice, nutmeg and ginger.

Taste: Silky and smooth on arrival, but to my palate, still lacking a bit of punch. Stone fruits – peaches and apricots – reveal themselves again, alongside gooseberries and coconut shavings. Vanilla is heightened on the palate, but pleasingly comes across as pods rather than extract. There are some mineral flavours here – copper and wet steel. Golden malts, toffee and butterscotch run throughout the taste from the front palate to the back – it’s sweet, but nowhere near as sweet as the nose implies. Wood influence is greater now – slightly bitter, a touch earthy (mild dunnage) and delivering nutmeg, ginger and white pepper.

Finish: Medium and packed full of peppery vanilla and with a lovely fading astringency.

The 2017 edition of Very Rare is one of the best I’ve tried in a number of years. The nose is exceptionally elegant, and whilst the palate doesn’t quite deliver the fruit explosion that that nose hints at, it does manage to skilfully juxtaposition sweet toffee, caramel and fruits against slightly bitter spice and wood. Balance and poise are both in abundance here, resulting in a whiskey that is both dangerously quaffable, as well as self-assuredly well composed. I still wish for a version produced with a slightly higher ABV (46% would be ideal) to help with the delivery of the top notes and flavours (and to bolster the mouthfeel further). However, fans of Very Rare will not be disappointed with the new edition – revised packaging, a different bottle design, but still with the same high quality whiskey inside.

With thanks to Mark Bickell for the sample.