Blending in or standing out

Creating a blended whiskey is far from as simple as adding component X to component Y and giving it a good shake. Blends are the oil that keeps the wheels of the whiskey industry turning (responsible for more global sales than single malts several times over), but that doesn’t mean that blended whiskey need be boring bottom shelf glass filler. Far from it. The Dramble recently spent some time at Midleton Distillery in Cork with Blender Dave McCabe – discovering that his art has as much to do with safeguarding consistency and preserving longer term stock as it does with the whiskey equivalent of potions class.

“Every cask I take from our warehouse, is one less cask my successors have the opportunity to use” McCabe explained. Despite the impressive capacity offered by Midleton’s glass-fronted ‘Garden Stillhouse’ (75,000 litres per pot still – the largest in operation), there’s only a limited amount of liquid produced that deviates from the distillery’s ‘Type A’ (Jameson) distillate. That’s needed constantly to fulfil the requirements of the widely available and hugely popularly global brand. ‘Type C’ – Trad Pot – one of the defining category styles of Irish whiskey is only produced for a few months each year. As such, when McCabe and his team utilises already mature pot still casks into a new product, the overall palate of casks available for the next 3,5 or even 10 years is diminished – to a much greater extent than it would be pulling one of the many ex-bourbon grain casks from the distillery’s nearby Dungourney storage facility. There’s a large responsibly for the future on McCabe’s shoulders.

Whilst McCabe spends much of his time sampling casks and assessing their conditions relative to the expressions that the company is producing and looking to produce, it was clear that his role involves walking a tightrope of finite supply. “If you think about it, whiskey is always about the future” he proposed – “Everything we’re making here today is for use later down the road”. It’s a balancing act - What do you leave for the ‘future you’? How much stock do you lay down to meet the potential demands of a somewhat unknowable upcoming generation? There’s no precise science here – just educated prediction, careful planning and, importantly careful sampling. 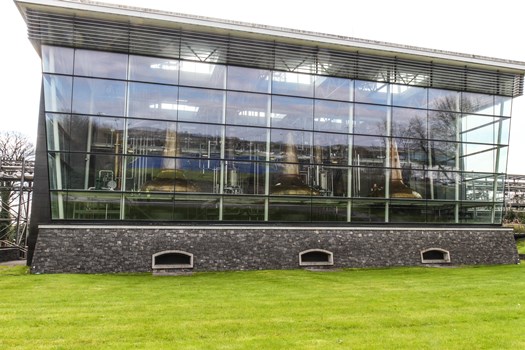 McCabe indicated that over time, a blender would hone their art to be able to quickly and accurately profile a cask – what stage has the whiskey matured to? Does it possess the perfect (and expected) characteristics which would shoe horn its character into one of the distillery’s existing products? Does it need more time? Or is it simply a little aberrant? This process is ongoing – and with the production capacity at Midleton, there’s more than enough assessment to be conducted - constantly. It’s a vital part of the process – as you’ll already know, across big global brands such as Jameson, consistency is vital to a product’s success. Consumers have brand loyalty for a number of reasons – knowing that their favourite bottling tastes (and in some cases looks) identical each and every time is one vital facet to this.

Going beyond this, into more limited edition blends, either the distillery team or Irish Distillers more centrally will have a very detailed idea of the eventual whiskey they intend to produce. In order to create this, the selection of casks utilised need to fit a certain profile – it’s no good throwing an anomalous cask into the mix for the sake of it being available – every component has its proper place.

Whilst wandering around the extensive Midleton site (in our fetching hi vis jackets – the modern distillery situated behind the Jameson Midleton Experience is very much a large-scale working plant), we spent some time in the state of the art Midleton Academy – a training facility that sits between both the old and the new sites. It’s here that since 2013 Irish Distillers have operated an going number of industry training events – both for external attendees, and for current site operatives. Despite the heritage, new Midleton is one of the most modern facilities in the world. Training across all branches of the distilling process is conducted at the Academy, ensuring that whether it be grain, malt or pot production, that employees are able to understand the process end to end (particularly pertinent since staff assignments vary – one day you might be here, another there). 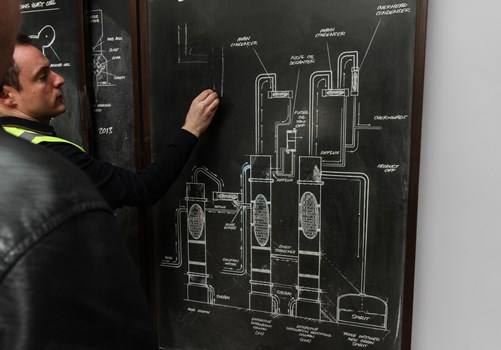 McCabe – one of the original tutors at the Academy when it was founded – is clearly in his element as he shows us around the ex-woollen mill facility. Despite being a stone’s throw from old Midleton, it’s a vision of modernity with mock up mash filters, mini distillation setups and a baffling array of cask samples designed for showing the myriad spirit combinations which go to make up the distillery’s wide variety of currently available expressions. “The Academy is where traditional methods meet innovative new technologies” McCabe highlights. I start to feel that as much as my time spent with him has focussed on blending, that the training and skilling of the next generating can only lead to Midleton continuing to stand out.

Whilst my drinking time at Midleton was spent cracking open a selection of rather venerable 90’s pot still sherry casks, that very same week I was sent a sample of one of the distillery’s latest blended products – Jameson Bow Street 18 year old Cask Strength Batch 2. 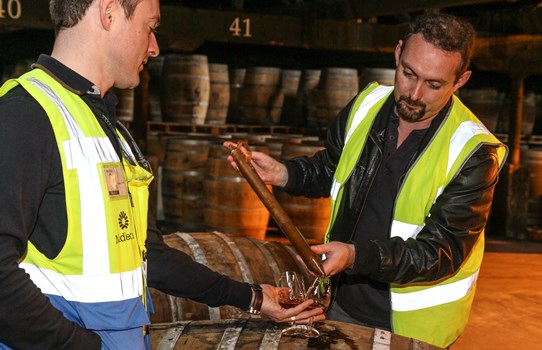 Similarly to the first batch of Bow Street 18 year old, Batch 2  is a blend of ex-bourbon and sherry cask pot still and Irish grain whiskeys that have been distilled and matured at Midleton (using a combination of malted and unmalted barley). These components are then transported up to the Bow Street site in Dublin for a married finishing period (specified as 6-12 months) in 1st fill American oak ex-bourbon barrels. The ABV of this is just a tiny bit lower at 55.1% ABV, and whilst the number of bottles is presently unspecified, I suspect it’ll be similar to Batch 1 – around 15,000. Whilst the bottling was unveiled for St Patrick’s Day, it’s expected to become available in August 2019 (presumably to give the 1st Batch just a little bit more time to dry up) at a RRP of €240.

Nose: Fresh and lively combining expressive fruits with an animated wood influence. Lemonbalm, peach, grapefruit segments and guava sit alongside gingerbread, tonka bean and vanilla cream. The oak influence seems more pervasive than Batch 1 – spiced with nutmeg and white pepper, but with some inescapable sawn planks and wood chips – fresh, ‘green’ and sappy rather than dusty and well-rested. Dilution expresses some of the grain elements of blend (which seem totally integrated at its natural ABV) – pastries and popcorn joined by cashews, vanilla pods and pine needles.

Finish: Quite long, quite peppery with grainy notes circulating with intense but fading oakiness.

Jameson Bow Street 18 year old Cask Strength Batch 2 (quite the mouthful of a bottle name) offers both vibrantness and good balance in a package that’s both modern and wood-led. The integration here is exceptional – artful blending assimilating the ex-bourbon, ex-sherry and particularly grain elements into a cohesive whole. But, as a foil, there’s a ton of contemporary wood here, which will either be your thing or it won’t. Price-wise, €240 is exceedingly steep for an 18 year old expression – however, if the Batch 1 is anything to go by, prices for this are going to vary – be prepared to shop around.

With thanks to Dave McCabe at Midleton, Irish Distillers and Richmond Towers