If it matters it produces controversy 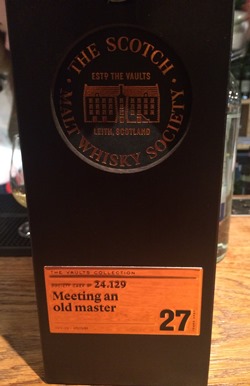 There’s been considerable change at the Scotch Malt Whisky Society over the past 12 months. Last week, the Society announced that, following member feedback, the ‘sample subscriber’ category (whereby non-members could purchase the Society’s bottles for a 30% surcharge) has been revoked. Cue dissatisfaction across the social web. Hark back to when the Society introduced said category and you might remember a similar level of grousing. Sometimes you have to wonder if the SMWS is damned whatever the do.

However, the subscriber change is not the most controversial recent announcement from SMWS – The Vaults Collection had already caused a disturbance in the force well before its official release today. For those who’ve been nursing hangovers under a rock, here’s a quick summary: SMWS have introduced a new series showcasing ‘..the finest and rarest casks’ – the first releases in this new series are 25.70 ‘In a Perfumed Garden’ (A 26 year old Rosebank – the Society’s last cask of this silent distillery) and 24.129 ‘Meeting an Old Master (A 27 year old Macallan). So far, so exciting….but wait, the Vaults Collection differentiates itself from the usual SMWS bottlings with its own black and gold branding, wooden boxes (more in these in a minute) and price tags which will make your eyes water - £875 and £980 respectively. Cue dissatisfaction across the social web.

Before some wider musings, we’ll take a look at 24.129 which we got the opportunity to try last week before its release today. For a shy under £1000 you’ll be getting a Macallan which was distilled on 7th May 1990 and matured in an ex-oloroso sherry cask for 25 years. It was then re-racked into a 1st fill Pedro Ximenez Sherry butt for a finishing period of 2 additional years. It’s bottled at 53.6% and limited to 414 bottles.

Whilst still unmistakably a Society bottling, the packaging moves into all new territory  - first of all, there IS packaging. A heavy black wooden box with a port-hole near the top. Perhaps the Society is moving into a new wildlife conservation mode, but I just can’t help feeling that these would look perfectly lovely nailed to a tree with some Blue Tits nesting in them. Then, there’s the labelling which, unlike other Society bottles does not actually provide you with the distillation, bottling and cask information – nope, for that you’ll need to open the bird box and fish out a black envelope containing a crib sheet. 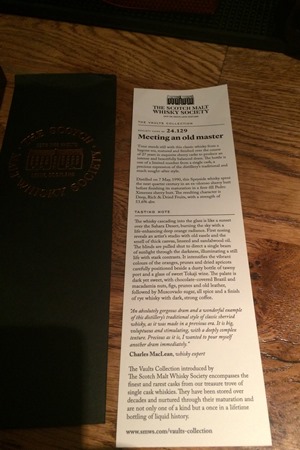 Nose: The darkness of the liquid is matched by the profile of the nose. Intense, rich and heavy. Seriously dark chocolate wafts together with enough coffee beans and grounds to open a new branch of Starbucks. Deeper still and we’re getting liquorice, treacle and sticky toffee pudding. Fruit is still discernible and tropical in profile – mangoes in particular. There’s an interesting touch of menthol which I was not expecting in amongst the sherry-fest. A splash of water brings out some cask spice in the form of ginger and cinnamon.

Taste: Highly viscous and incredibly grippy – almost tannic. Let’s get this out of the way first….sulphur. Whilst I could not detect it on the nose, on the palate there’s more than a hint of struck match and volcanic pools. Personally I don’t have anywhere near as much issue with this as some, but it’s important to note its presence all the same. The pyroclastic experience continues with richness upon richness – dried and stewed fruits, coffee again (this time freshly brewed) and a real meatiness, which to my taste came across as Bovril. The woodiness is pervasive here – I guess you’d rather expect it for 27 years in casks. However, it almost feels as if the bitterness of the cask has been tempered by the sweetness and richness of the PX. Perhaps this was the reason for the additional 2 years of finishing? I didn’t find adding water to be as useful as on the nose – indeed, the richness and almost cloying nature of the PX is a real feature here and dilution simply takes the edge of what is a very impressive mouthfeel. Keep it natural.

Finish: Long and favouring cask influence – spice from ginger, but also bitterness and heavy astringency (have a glass of water handy).

So, a conclusion in three parts:

24.129 Meeting an Old Master is the sort of treat you’d expect from a longer-aged sherry-bomb Macallan. If you’re the type who loves heavy sherry-influenced whisky this will no doubt be right up your alley. The converse if true if you’re an ex-bourbon lover – “move along please”. However, taking as balanced a view as is possible here, whilst the intense, deep and grippy flavours of this bottling are indeed lovely, it’s far from perfect – to my palatte, it’s been matured too long – the wood and sherry influence have entirely taken over, and there’s virtually no Macallan spirit influence to be detected here. The two year PX finish is likewise a touch baffling – what was going on after 25 years in ex-oloroso that it was felt that the additional finish was required? Perhaps the high bitterness of the cask resulted in a decision to use the PX to add some sweetness and reduce the sharp astringency? In that regard, it has probably worked. Or, perhaps the rich, syrupiness was a wanted addition to give the finished bottling another level of luxuriant mouthfeel, or to differentiate it from OB Macallans? Who’s to say, but at the tasting I attended it really divided the room.

Price is, of course, a highly subjective subject matter so I can only give a personal view – your mileage my vary. £980 is a huge ask for this bottling and I can’t help but feel that if that’s the type of budget you have to play with for your brown spirit purchases that there are a lot of other options that you might consider first. As a positive, the Society is going to offer 10ml measures of this bottling behind the bar for £16 – so in that sense, all members are notionally able to try this new Vaults Collection bottling. However, to my mind, this is a super-premium price and one that is not wholly justified by the quality of the liquid itself. I’ve heard a few views on this: “Well it is a Macallan” – Sorry, just no. Whisky enthusiasts are in dire need of readjusting their sensors away from entirely brand-name led propositions, and the Macallan is not the only industry talisman for high prices that I’m talking about here. “Everyone else is offering super-premium so why can’t the SMWS have some of that action?” Economically this of course makes sense, but it still doesn’t satisfy – you don’t have to look too far on the Internet to see other similar bottlings being offered for a fair sum lower than this (indeed, just have a look at what previous SMWS 24’s have costed) – there’s a hefty slab of additional £s added to this bottling. But then it is a lovely bird box right?

Finally, the real elephant in the room – should the Society even be doing this? Over the last 12 months, with every new announcement the SMWS have made has come a fair degree of disdain – far too much in my opinion. The new coloured branding has been extremely helpful when explaining the different styles and flavour profiles to those less well versed in all things whisky. Likewise, I applaud the Society's decision to bottle a blended whisky in the form of Exotic Cargo (reviewed here) and to introduce new single cask spirits. Modernisation and innovation are vital to keep the Society relevant, and to introduce the wonders of high quality spirits to new generations. However, I cannot, say the same about the introduction of the Vaults Collection. I and many others joined the SMWS for high quality single cask spirits – but on a level playing field – whiskies that by-and-large everyone could afford and enjoy. The Vaults Collection introduces a new super-premium category to the Society -  a category which is divisive in terms of marking out the ‘haves’ from the ‘have nots’. Whilst, I’ve been told that additions to the range will be infrequent and few and far between, I still can’t help but thing that the very existence of the Vaults Collection is further proof of the growing divide in the whisky community, both economically and philosophically. These bottles are priced as collectors’ items and I suspect many will be purchased as such. The SMWS talk about whiskies being ‘lovingly selected’. I fear we’re moving into a new world where they’ll simply become ‘lovingly collected’.