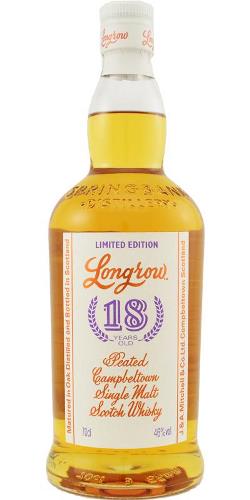 Longrow is Springbank’s double distilled and heavily peated line of whiskies. Its name derives from the long lost distillery which operated in Campbeltown from 1824 through to it's closure in1896. Springbank first produced Longrow as an experimental ex-bourbon/ex-sherry cask marriage with a phenolic level of around 50PPM. It gained a small army of fans and has subsequently become established as one of the distilleries three main brands.

The 2016 release of Longrow 18 year old seems a bit of a departure from previous bottlings. Past releases were (to the best of my knowledge and experience) 100% ex-sherry cask matured – this release is a vatting of 60% ex-rum casks with 40% refill sherry casks.

Taste: Light and at the same time unctuous offering a sharp tang on arrival which gradually subsides into something more silky, buttery and subtle. Pineapple is now joined by apples and pears and more pronounced citrus provides real ‘bite’. Both maritime salinity and oak maturation pepperiness are dialled up a notch now and enhance and amplify the mineral notes. Smoke has subsided into the back of the palate where it’s earthy, pungent and yet still providing some of the sweeter notes which balance against the quartz-sharp minerality which runs through the very heart of this whisky. Resting this dram offers some new notes with meaty leathers and furniture polish coming out to play – both add yet more complexity to an already absorbing dram.

Finish: Long with a sharp coastal tang and drying astringency.


Interesting whisky is interesting. Longrow 18 year old is delicious and from the cask makeup you’d truly not guess on the journey you were going to be taken on. This is to be applauded. All too often whisky can be delightful and yet at the same time mundanely predictable. The 2016 release is anything but. Cold hard polish steel is the order of the day – I’ve not a whisky so steely in a long time and I’d frankly never expect if from a rum and sherry cask marriage. Balance is probably this dram’s highest accolade, it would be all too easy to allow the sweetness to become cloying or the minerality to be unchecked and too severe, but neither are the case here. Everything is in check and where it’s supposed to be. Steely rum casks, who’d have thought - I do love learning new things.