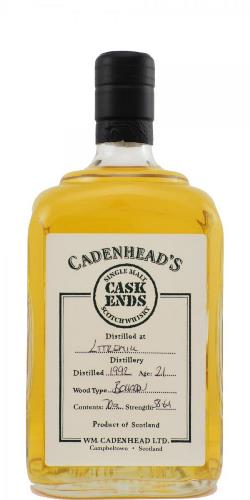 Littlemill was a distillery located on the border of the Lowlands and Highlands in Bowling, West Dunbartonshire. I say 'was', as sadly, the distillery ceased production in 1996, was dismanted in 1997, and then burned to the ground in a fire in 2004. However, it's not all doom and gloom as the remaining stock from Littlemill was rescued and is now owned by Loch Lomand Group.

Littlemill received its distilling license in 1817, though rumour has it, that distilling was taking place at the site as early as the 1770's. That would potentially make it the oldest in Scotland - though this has never been officially verified. A fair amount of experimentation took place at Littlemill over the years, from triple-distillation (a Lowlands trait) though to the production of lightly peated (Dunglass) and heavily peated (Dumback) whiskies. All bottles of Littlemill are now considered rare given that no new spirit has been distilled on the site for over 20 years. If you want to try some Littlemill, independent bottles occasionally come on the market so keep your eyes peeled.

Today's Littlemill is exactly that, an independent bottling in the form of a 21 year old distilled back in 1992 and matured in an ex-bourbon cask. It comes from Cadenhead's 'Cask Ends' line - bottles made up (sometimes 70cl sometimes just 20cl) from the leftovers of casks. If you're interested in exploring whisky remnants (I’ve tried some gems over the years) Cadenhead’s have still got you covered with their ‘cage’ of samples and ends at both their Campbeltown and Edinburgh shops.

Taste: Take all of our breakfast notes from the nose and dial them up ready for lunchtime. A rich and impressively expansive arrival of fruity flavours which commences fairly saccharine but calms down once the palate has adjusted. Tropical fruits notes from pineapple, mango and coconut combine with some sharper grapefruit and a real grassy green taste – our darker herbal tea has transformed into a sweeter green tea. There’ still some sharp zesty citrus action going on here which provides a nice minerality to the fruit fest.

Finish: Medium to long with the tannic nature of 21 years of wood maturation now coming to bear.

A high degree of complexity going in here in amongst the fruits, herbs, teas and sugars. The sharpness of citrus and astringency of the wood helps keeps in just about in check, but even a sweet-tooth like me finds this just on the wrong side of too sweet and slightly cloying after a while. As is often the case, a little resting time in the glass does wonders to bring everything back into balance. However, despite the high 58.6% ABV I did not personally find that the addition of water provides a benefit – rather it dulled the super pronounced herbal, floral and fruity notes which are the highlights of this interesting defunct Lowlander.

With thanks to Thijs at Words of Whisky for the sample swap.