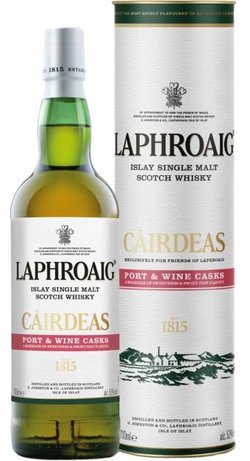 Have my tastes changed? Is there something in the water? Or perhaps I’ve finally succumbed to the continued bombardment of new releases? Either way, over the past year, not only have I found myself drinking more wine influenced whiskies - I’ve found myself enjoying them more. “My name is Matt and I’ve become a wine cask pervert”. Well – not quite. My thoughts on wine cask maturation are well documented across this site – and similarly my views on what I see as failed integrations have not changed. Wine casks are awkward things. They require an adept and watchful touch to ensure that their potentially powerful impact doesn’t overwrite the prevalence of the spirit – and bring with it the greatest sin of the wine cask – an overbearing overabundance of wood and astringency.

Tannins (tannoids) are naturally occurring compounds (polyphenols) which can be found distributed across a wide variety of plant-life. Their evolution is often ascribed as a form of protection against predators – I.E. that their natural bitterness is off-putting to those looking to chow down. In wood their presence is as tannic acid (quertannic) – which is abundant in both chestnut and oak. In wine, tannic compounds are found in grape seeds, stems and particularly in the skins. If you’re wondering why your wine feels either characterfully dry, or particularly bitter – tannins. The level of tannic influence will depend on how long the grape juice sits alongside the skins, seeds and stems after it has been pressed – thus, red wines, which draw their colour from the grape skins have much stronger tannin levels than white wines. Wine makers look to tannins not just because of their influence on colour – but also because their extraction can derive additional complexity (of flavour, texture and structure) into a wines. Tannins are also a natural antioxidant – a useful preservative – particularly if you’re looking to age a wine. But you knew all this, already right?

Tannins play a similar (though not identical) role in whisky maturation – adding both astringency and impacting a whisky’s colour as it develops. But ‘tannic’ is not a tasting note per se – or at least not a good one. With a variety of sources and causes it is far more interesting to explore the textural impacts of tannins than to simply equate it with bitterness as a flavour. Tannins are complicated little beasts. But without them both your wine and your whisky wouldn’t taste like it should do.

As with all things booze-based there’s a balance to be found. And it’s often a personal one. One person’s wood-fest is another’s simple joy. There’s no accounting for taste – there’s just accounting for differing tastes. And there within lies my long-standing issue with wine cask maturation. It’s not a hatred – far from it – there’s numerous bottlings I’ve enjoyed greatly over the years. But at the same time, there are countless instances when I haven’t – and I have a strong conviction that wine casks integration can be obstinate, overbearing, or at times just completely unsuited to particularly spirit styles.

And yet here we are in 2020 and I’m repeatedly finding wine cask matured and finished whiskies that I’m actively enjoying. Lockdown has finally stripped me of my remaining sanity.

I’m not attributing this to a change in my tastes – though those do somewhat wax and wane across the years. I’m attributing this to what I see as a growing understanding among whisky producers as to how to achieve balance and nuance from wine casks.

Whisky’s recent history is littered with examples of brute-force wine cask maturation – of simply dumping a spirit into a barrique, leaving it, and coming back in the knowledge that the distillate will have extracted an appreciable amount of flavour. Flavours which are largely popular – jammy berries, sultanas and fruit cake - all nice things. But not necessarily with any distinctions – and in many cases with an overall influence which has run roughshod over the spirit character itself. Sometimes fun – oft-times highly imbalanced.

Things seem to be changing – or I’m just simply selecting better wine cask matured whiskies to both drink and review. I’ve sampled a sufficiently large number of highly enjoyable pink and red-tinged whiskies over the place 12 months that it has me starting to wonder if producers and bottles are finally looking to wine casks as a mechanism to add layers and depth rather than as flavour steamroller.

Today’s review bottling is solid case-in-point. A sympathetic spirit combined with a judicious maturation. Who’d have thought it – not me. It seems we’re going through changes.

The 2020 edition of Laphroaig Cairdeas, described as ‘a marriage of sweetness and smoky peat flavour’ is composed of ex-bourbon barrels and 2nd fill ruby port barriques that have been married together and then finished in ex-red wine casks. Whilst there are plenty of whiskies matured in port, and plenty of whiskies finished in wine – I don’t remember the last time I sampled a whisky with the two being combined into a single expression. That’s potentially a lot of wine influence.

The release is, as is always the case with Cairdeas offerings – NAS. The Interwebs will offer up a variety of tales (and outright guesses) as to the age of the liquid. The most commonly cited being 5 year old ex-bourbon and port components finished for three years in wine. Completely unverified of course – “John Campbell told me so in the back room of so-and-so hotel, whilst no one else was in earshot” doesn’t really cut the proof mustard. But then again, does this knowledge really matter? The potentially more salient observation - as Billy Abbot pointed out in his write up is the use of second fill port casks – which when vatted with ex-bourbon casks provide a ‘base’ which has not already become over-influenced pre-wine finish. Whisky enthusiasts will often gun for 1st fills (particularly on sherry) believing them, not incorrectly, to offer the highest possibility of the largest amount of flavour. All casks, and in my opinion particularly wine casks can become overbearing when looked at purely from an extractive potential point of view. More rarely equals better – it’s just equals more.

The bottling is produced in unspecified large quantities at an ABV of 52.5% – and is still available directly from the Laphroaig website for £89.90 – a bump in price over the 2019 Triple Wood Cairdeas that we reviewed just last month – and that’s to say nothing for the shipping cost. Yikes. Oh and the colour is worth noting – it’s a perfect synthesis of its elements – a pink hue from the port, a red tinge from the wine – the result heading firmly into Lucozade territory.

Nose: A compact combination of redcurrants, strawberries and plums served with a slice of millionaire’s shortbread (a shortbread base with gooey caramel centre and tempered chocolate atop), a box of After Eight mints (no explanation should be required) and a tin of condensed milk. Typical Laphroaigian cues follow with TCP, disinfectant, briny water and ashiness sitting alongside a backdrop of minerality – sandy beaches and polished shingles – and moisture – damp wood, moss and sack cloth. Running throughout – pink peppercorns, dried parchment paper and oven-roasted rosemary. Reduction reveals pink water biscuits, pan sugars, moist earth and pan sugars.

Taste: The arrival delivers creamy toffee and machine oil…..in a somewhat subdued manner. Not to worry though – whoop there it is – a surge of hospital-tinged, fruity peat smoke rushes through the mouth – tart limes, jammy red berries and cherries with floor cleaner, bandages, ointment, and tar. The mid-palate offers hazelnuts in chocolate, before the ex-bourbon cask precursor delivers creamy salted toffee and desiccated coconut – ashiness and mentholated oak can be felt throughout. The addition of water amps up the sweetness with juicy fresh red berries sitting alongside nougat and cocoa powder – medicinalness is reduced, but still perceptible throughout.

Laphroaig 2020 Cairdeas provides us not only with the annual playful spin on the spirit, but with a port and wine cask integration which has been well-conceived and well-executed. Aromas and flavours are vivid and well-defined, and the distillate character still underpins the experience from start to finish. Whilst Laphroaig could have easily dumped the spirit into pipes and barriques and given it a final shake for good measure, the decision to tone-down the wine influence has paid dividends. The result is balanced, tasty and still as fun as I’d expect from a Cairdeas release. It’s seems wine o’clock is becoming more of a thing.

With thanks to Billy Abbot for the sample