Port is always left at sea, but never left at dinner 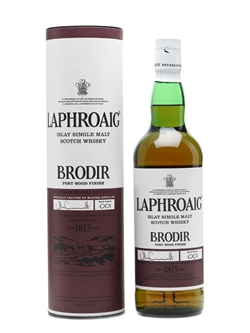 Originally a travel retail exclusive, Laphroaig Brodir is matured in ex-bourbon casks and then transferred over, for an unspecified finishing period, into European oak casks which previous held ruby port. The name Brodir translates into 'Brother' from ancient Norse....so we're stepping on the brand toes of Highland Park with some viking-based etymology.

There are a wide range of different ports available with ruby port being one of the most extensively produced. After fermentation the port is held in concrete or stainless steel vats, which preserve the vibrant and vivid colour and likewise prevent oxidization. So, combining this rich and sweet fermented wine with a highly phenolic and equally rich Laphroaig spirit should make for some interesting results.

Nose: Of course peat, and of course medicinal, but sweetened, almost like smoked strawberries if that were a thing. The maritime and seaweed coastal qualities you'd expect are all there, but they're dancing a tango with a medley of red fruits and some kind of sooty honey combination. It's arresting. In an unexpected way.

Taste: Phenols moving into the passenger seat now and our journey is being led by redcurrants, cranberries and juicy pears. The smoke is certainly still there and still characteristically Laphroaig, but the whole experience is somewhat restained. The peat is drying and sweet with additional notes of toffee and a light cinnamon spicing adding a level of complexity.

Finish: Well balanced though on the shorter side. Spicing more evident here with the cinnamon being joined by white pepper, clove and dare I suggest, a hint of plastic?!

Zingy and fresh, which is surprising given the more expected peat-led nose. Resting your glass will add greater balance and more discernible flavours so don't rush at this one. Overall, well put together and an interesting and rewarding experience. Now where's the 20 year old version?