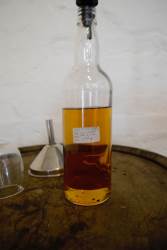 Our final tasting at the Laphroaig Warehouse 7 tasting was a combination cask, where the initial ex-bourbon was re-racked in 2013 into a quarter cask for its final 4 years of maturation.

Taste: Sharp medicinal peat. Not a wisp, more of a full wintery coastal blast. All that you'd expect in terms of TCP and rich smoldering earth. Tempered by a great high ABV mouthfeel and heavy spicing from the increase oak contact.

Finish: Sustained and drying with the smoke making way for peppery notes.

Very 'Laphroaig' with rich and powerful flavours and a hard hitting ABV to match. Punchy, robust and probably not for your little cousin who's looking to try their very first whisky, For grown-ups only.