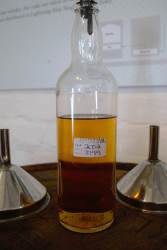 Nose: Smoke,and a smattering of medicinal maritme peat - but not too much. The malt spirit is still very present and brings the malts and cereals quite heavily. This gives the dram quite a sharp nose, pleasingly tempered by some salt and iodine which bring it back into balance.

Taste: Here's the TCP. Rich and mouth-filling, but at the same time seemingly young tasting, despite its 15 years of age. A tarry and slightly ashy note plays with a hint of citrus.

Finish: Medium and very drying. Salt and pepper both here - it's like table seasoning!

Balanced and integrated, and in a fairly unusual manner. This is not typical Laphroaig and possesses both a degree of poise as well as a degree of youth. Reminds me a little of An Cuan Mor but with the ABV turned up to cask strength.