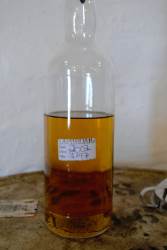 Nose: Spiced toffee apples is where we're going here. The spirit is still discernable, but is both sweet and fresh, almost steely. The smoke is surprisingly light and rather in the background to the sugary fruits. Notes, pears, stone fruits and vanilla.

Taste: Sweetness again, with the smoke coming through stronger now. But, interestingly, this is not the medicinal, TCP-type smoke you're expecting at all. It's oily, sooty and ash-laden. Hard peaches with wood spicing which favours white pepper. The mouthfeel is certainly full, but is very mineral and flinty sharp.

Super-interesting stuff, and so far away from what you'd normally associate with Laphroaig, that tasted blind, you'd be hard pressed to do so. The most interesting of the three warehouse drams for me, and the one I decided to hand-bottle.