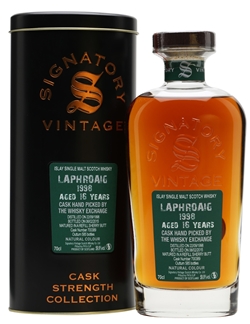 Ever-reliable independent bottler Signatory are no stranger to single-cask Laphroaig’s – there are 239 currently listed on Whisky Base - the oldest being a 1966 31 year old that would certainly shift for a pretty penny nowadays. Our Signatory Laphroaig comes via The Whisky Exchange in the form of a hand-picked cask – the Exchange team always know a good whisky when they taste one.

Coming in at 59.9% ABV, this single cask Laphroaig slumbered for 16 years in a refill sherry butt (700389) before being was bottled in February of 2015. The butt produced a total of 585 bottles – which have, it seems, become quite desirable – one sold at the January 2018 SWA auction for £330. Golly. Well, seeing as this bottle is already open…

Nose: An incredibly inviting menagerie of quality sherry aromas combined with robust meaty smokiness. Starting with salted caramel, chocolate, pipe-tobacco and leather the sherry influence here is unmistakable - but it also walks the tightrope between  old and musty and fresh and lively perfectly. Spent coffee grounds, raisins, meat stock, roasted ham and maple cured bacon further cement the cavernous depths of this whisky’s nose. Coastal smoke is on the down low (meaty smoke is the order of the day), but still ever-present – it’s slightly medicinal with iodine, but also somewhat earthy with ashy soils. Water adds some interesting red wine-like notes – blackcurrants and berries as well as bringing out more of the coastal peat influence.

Taste: Big, bold and packed full of flavour – chocolate, raisins, leather and tobacco – check, check. But, now the peat comes out to play properly – TCP, cough syrup, surface cleaner and briny rock pools, but with just enough zing of citrus to lift it. A few drops of water greatly enhances the peat here – smoked salmon and kippers, hospital ointments and balms – still wrapped up in a warm blanket of sherried sweetness from chocolate and now particularly espresso coffee.

Finish: Long, drying and packed full of chocolate, sea salt and coastal smoke – with a hint of bromine right at the close.

It’s easy to see why the chaps at Whisky Exchange picked this cask, and likewise why it’s become rather desirable on the secondary market – it’s quite simply excellent. The nose holds true allure, managing to balance both sweet with peat masterfully – offering real depth of aroma, whilst never losing sight of its underlying spirit character. The fact that the palate then goes on to deliver such robust, well-constructed, well-balanced flavour is quite remarkable. I could wax lyrical about this whisky for quite a long time – it’s without a doubt my favourite Laphroaig from the last 5 years. Add this to your list of ‘must try’ drams immediately.