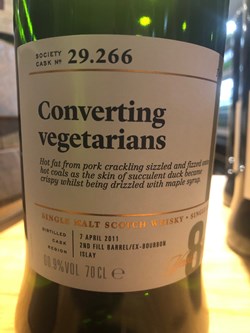 Over to Islay for a 29 – this one drawn from a 2nd fill ex-bourbon barrel.

Nose: Surprisingly shy straight out of the bottle taking a little time in the glass to unravel. Cured meats, ham hock and boiled vegetables sit with prominent damp cardboard and wallpaper paste. Running throughout, brine and a combination of tarriness and medicinal wipes. These expand with resting to take on ointment, bandages and green peppers. Reduction highlights brackish pond water and even more moist paper matter – papier mache.

Taste: A bigger and bolder arrival which offers good impact – a building wave of flavour which erupts and concentrates. First open, burning logs, then tarriness with bitumen and felt. The development moves through brine and salt into kelp before heading to the hospital with floor cleaners and a tang of grapefruit pith. The back palate has meatiness from BBQ and additional road surfacing elements alongside fire hearths. The addition of water reveals ashiness and pepperiness, but also a touch of raw oak in the back-palate.

Finish: Medium to long, tarry and with lemon-soaked oysters and yet more damp cardboard.

Whilst it would be unfair to describe this young Laphroaig as ‘undercooked’, there’s nevertheless a lack of precision and the character that sub-10 year old Laphroaig is capable of producing. I’ve seen plenty of fuss about this bottling from preview tastings early in the week – and I’m honestly confused as to why (beyond a die-hard predilection for distillery #29). Damp cardboard syndrome™ runs throughout and whilst it doesn’t spoil the overall character of the whisky, it certainly detracts from it.