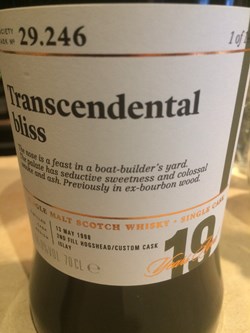 Another month, another 29, but strangely, this one has been slotted into the Heavily Peated profile – as you’ll read from our tasting notes below, those usual TCP-tinged Laphroaig notes are much more understated than you’ll find in many bottlings of 29. Somewhere between Oily & Coastal and Peated would have been a more apt category perhaps – but, this bottling is tricky to pigeon hole. It has been matured for 18 years in ex-bourbon before being re-racked in a 2nd fill hogshead for a final year of maturation.

Nose: A polished wood bench sat next to the sea – well-judged woodiness is joined by toffee and caramel sweetness sitting alongside a sea breeze and a surf and turf beach BBQ. Smoke is present and ashy like a sooty fireplace, but far removed from a typical Laphroaig profile packed with TCP and brine. There’s still bold aroma here, but the peat compass is pointing in a slightly different direction this time around. Meatiness is pronounced – a leg of ham, shaved salami, beef stock, and is joined by an interesting rubbery flavour (Ledaig anyone?). Water brings out more sea-based flavours such as hay-smoked fish, damp pebbles and sand.

Taste: An oily arrival with immediate weight and body – and surprisingly sweet – a full roast dinner, oysters and king crab, meat stock – all dusted in icing sugar. There’s more coastal profile here on display than was on the nose with surface cleaner and brine starting to exert their authority. Burnt logs, twigs and leaves provide further inland smoky flavour and are joined by puff pastry apple tarts and light tropical fruits – pineapple. Water reduces phenolic levels, transforming the smoke to ash and chalk, whilst upping the sweetness levels again with the addition of tinned syrupy fruits.

Finish: Long, quite ashy and mineral with plenty of BBQ meatiness still in play.

This 29 has aroma and flavour elements which are markedly different to what you might expect from a typical Laphroaig profile. Favouring a sweet and meaty focus, there’s still with plenty of mineral, ashy coastal influence, and I have to say, it all works together beautifully. There’s those of you who no doubt have an array of SMWS 29s sitting on your shelves, this one is no less excellent, but walks a slightly different path. Tangential bliss perhaps? My top pick of this month's outturn.