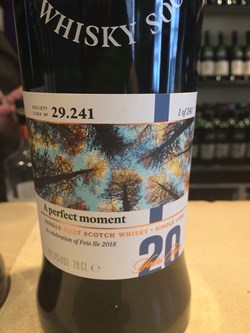 What’s this? A blue coloured Laphroaig - curiouser and curiouser! This one is a little less transparent than I’d expect from the Society – it’s 20 years of age, and is stated as having been drawn from a 1st fill ex-oloroso hogshead, having ‘previously inhabited an ex-bourbon hogshead’ – but how long in each is anyone’s guess. Oily & Coastal profile.

Nose: Certainly not the typical Laphroaig nose – there’s a slight medicinal quality here, but its hidden by a wave of salty seafood and meaty maple bacon. Molasses and sticky toffee pudding highlight the ex-oloroso influence, but sweetness levels are not through the roof here – there’s a lot of coastal impact – rock pools, pebbles and fresh fish. Smoke is certainly present, but it too plays second fiddle to the seaside profile – it’s rather reminiscence of the end of a firework display, blue touch paper and saltpeter thick in the air. Herbalness also has a part to play here with both pine needles and tree sap in play. The addition of water really brings the brine in this whisky to the fore, as well as adding in aromas of leather satchels and slightly yeasty bread. All rather fascinating.

Taste: A very meat-driven no.29 – salt beef sandwiches with a side of roasted vegetables and gravy for dipping. Again, juxtapositioned by sweeter flavours – honey, freshly baked sponge cakes and golden syrup. The smoke presence is exceedingly well integrated and comes across more as BBQ’d meats and burnt sugars than the expected TCP and surface cleaner. Water adds an incredible amount of savoury and umami flavours into the equation – ham hock, beef stock, sliced cold cuts all seasoned with herbs and pine. This doesn’t sound like it should work, but it does.

Finish: Long, slightly salty and coastal and combined with a selection of smoked meats.

Occasionally you turn up a Laphroaig that is fundamentally different to the acknowledged distillery style – this is one of those. It’s all rather left-field. Meaty yet coastal, herbal yet sweet. I need to try this one again – it’s a real thinker. Altered, idiosyncratic and pretty stimulating. Recommended.