Situated on Lagavulin Bay between Laphroaig and Ardbeg, distilling at Lagavulin was started in 1816 by John Johnson. Rumours abound at Lagavulin with stories of illicit distilling taking place since the mid 18th Century, family members falling into vats of boiling liquids and long running feuds with neighbouring distilleries.  Regardless, Lagavulin nowadays has a reputation across the world for fiery and unapologetically smokey flavoured whiskies. The popular expressions are matured in ex-bourbon casks and have converted many a whisky-drinking into becoming a fan of Islay's peatier malts.

When Lagavulin 8 year old was first introduced in 2016 for the distillery’s 200th anniversary it turned heads in more ways than one. A young age-statement rather than an NAS? A price not that far away from its sherry influenced, twice as old stable-mate? The bottling marked a change of tact for Diageo - and obviously performed so well, that it has now been inducted into the distillery’s compact core range offering.

Of all of the Game of Thrones Collection bottlings, this one surprises me most with its house alignment. Oily, coastal, peated – Cersei, Jamie and Tyrion?! I don’t really get it. But, as tenuously linked as these bottles are, it’s nevertheless pleasing to see Lagavulin continuing a trend which stated a few years ago – namely that, of not being afraid to put age-statements on a younger bottlings. The 8 year old (now part of the distillery’s core range) turned some heads, and has to my mind, somewhat set a new direction for Diageo – despite years of asserting that ‘age matters’ and then years of doing the exact opposite, there’s now at least some occasional balance being offered. The company has wised up the fact that their customers drink things and know things. 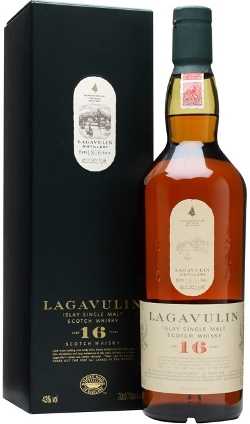 Lagavulin is oft times an intrepid whisky explorers' first dive into the peaty world of Islay malts. Situated on Lagavulin Bay only a mile down the road from Ardbeg, the distillery has been in operation since 1816 and  just celebrated its 200th anniversary. The 16 year old is well regarded as a classic whisky that everyone should own a bottle of. So, let's make sure it's added to our liquid library of reviews...