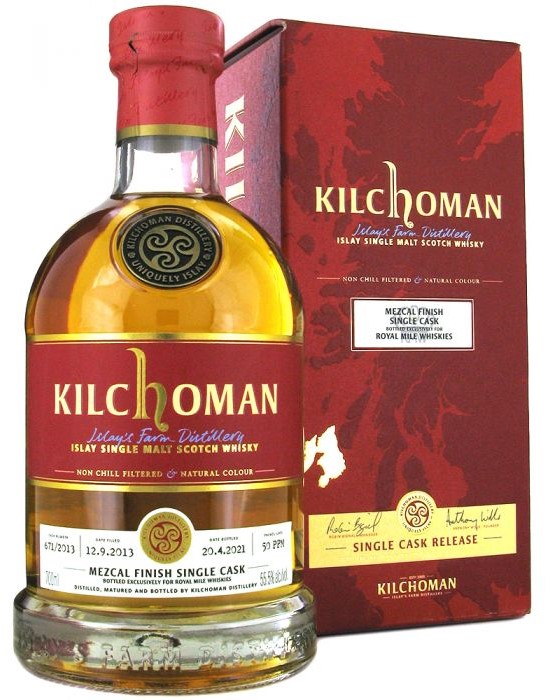 This Royal Mile Whisky exclusive Kilchoman stands as the first mezcal cask whisky that I sampled. Whilst it was released back in early 2021, I kept my notes ‘on ice’ until I had a wider pool of samples with which to compare with. Today’s the day. The peated Islay whisky has been finished for 9 months in mezcal casks sourced from Oaxaca in Mexico.

Whilst Oaxaca is home to much of the production (70%+) of this highly traditional spirit – it is also produced far wider than just this single region – Durango, Guerrero, San Luis Potosi, Zacatecas and Puebla are all part of Mezcal’s Geographic Indication. And highly similar spirits are crafted in Jalisco, Guanajuato, Michoacan and Tamaulipas – though these are not legally covered by the Appellation of Origin and therefore can only be currently labelled as ‘agave spirits’ and not mezcal.

Equally, the costs of certification to the Norma Oficial Mexicana (NOM) are far from nothing – and many producers are unable to bear these and so are forced to use the alternative terms such as the aforementioned ‘agave spirits’ or ‘destilados de agave’. Nevertheless, whilst mezcal is increasingly being exported – you should not look down on these alternatively labelled products as being in any way inferior to those officially labelled as mezcal. Many of the very best examples of this spirit come from tiny palenques (distilleries) who not only cannot afford certification – but who also vehemently believe that the term “mezcal” is a way of life and a tradition, not a designation that should be controlled by the state.

This RMW exclusive was bottled at 55.5% ABV and originally cost £89.95. It was one of the first mezcal cask releases available – and sold out relatively quickly. A number of new releases have followed, and so you might well find that sourcing these will be considerably easier.

Taste: The arrival delivers a real tang – lime, apple, syrupy pineapple and chilli pepper heat. Hot coals and smoked reeds and ferns exhibit some cooked agave character whilst white chocolate and wood smoke see the journey interplaying both sweetness and bitterness toward the end. Dilution offers a punch of saccharine – lemon bonbons and unfined sugars together with a selection of fruit extracts and charred oakiness.

Finish: Medium to long in length with plenty of peat smoke and lingering pineapple sweetness.

Straight out of the bottle this mezcal cask finished Kilchoman offers a first-rate interchange between bright fruits, sugary sweetness, ‘green’ agave notes and underlying peat. But reduced there’s just too much residual sweetness in play here – and the whisky quickly loses much of its definition to a combination of saccharine and vague smoke. As such this can be considered to have been bottled at its best ABV – and that’s fine enough for those who don’t like to play with a pipette.

With thanks to Dave Ogden for the sample