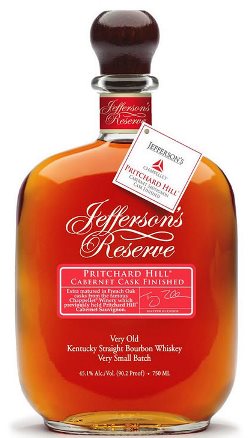 Over in California there’s a symbiotic relationship developing between distillers and vintners. Over the last few years you might have seen a variety of wine finished bourbons and ryes on the market, but, at the same time, the US wine industry is increasingly experimenting with the use of ex-bourbon barrels to boost the richness and flavour palate of their products too. Whilst bourbon, by law, has to be initially aged in virgin American oak (so unless the rules change you’ll never see a 100% wine aged expression – and I’m not sure you’d even want to), there’s still some flexibility to add additional flavour notes through re-racking into barrels with different predecessor liquids.

The bottle indicates that the Pritchard Hill Cabernet Cask is ‘very old’ – so your guess is really as good as mine. However, the interwebs leads me to discover that not all that long ago, Jefferson’s Reserve Kentucky Straight Bourbon (their standard bottling) did possess a 15 year old age statement, so it’s not unreasonable to guess that there’s probably some older barrels in the mix here (though likely this is a multiyear vintage). It’s then spent 12 months in French oak Cabernet Sauvignon barrels – whilst not outright pink or red in hue, there’s certainly a hint of the wine colour visible.

It’s also worth noting that Jefferson’s use ‘whisky’ rather than ‘whiskey’ to describe their bourbon – there’s always someone bucking a trend wherever you travel. The reason for this difference is unclear, but it’s another differentiating factor between Jefferson’s and other bourbon brands, so you can be sure that owners McLain & Kyne have not done this by accident. The Pritchard Hill Cabernet Cask comes in the usual US 75cl bottle and clocks in 45.1% ABV.

Nose: Sweet, spiced, but quite gentle and delicate. Opening with a variety of fruits – plums, dark cherries, blackberries and raspberries, this moves quickly into deeper aromas of cinnamon spice. Cask influence from the ex-bourbon comes through with gentle vanilla and oak and is supported by notes which seem to have derived from the Cabernet – leather, biscuits and a scattering of ground nuts. A few drops of water bring out more complex spicing – cumin and allspice. Whilst not outright ‘winey’ there’s certainly some presence here and the selection of aromas mingle and play together quite nicely.

Taste: Bolder now, but still restrained. Heading down more of a stone-fruit route with peaches and apricots, this develops darker fruit flavours (cherries and plums) after a little resting time in the glass. Spicing is much more prevalent now – pepper, ginger and cinnamon. The whole palate has toasted corn, candied sweets and earthiness running right through it – the wine influence seeing less noticeable than on the nose now. That said, the wood influence and particularly tannins are very clear making for some astringency in the back of the palate. The addition of a water softens the fruits and the tannins heavily. However, it also dulls the prickly spices, so the end result loses a fair bit of character. Personally I’d stick to this straight out of the bottle.

Finish: Medium in length, quite dry and quite oaky.

Jefferson’s Reserve Pritchard Hill Cabernet Finished is a good bourbon that’s quite easy drinking. The Cabernet influence for me was much more noticeable (and indeed successful) on the nose than on the palate – where the levels of tannins felt quite high to my palate, but didn’t, at the same time, bring with them the assortment of red and dark fruit flavours I’d expect from the wine itself. I’ve not seen this available outside of the US to date, and it’s price point there is fairly high – around $70. Certainly worth trying if you get the chance, though to my taste, the previous Groth Cask was a more successful experiment.