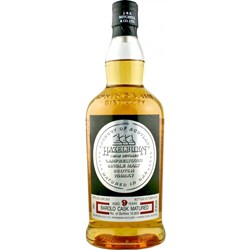 The 9 year old Barolo Cask Matured was released in 2016. It was matured for 6 years in ex-bourbon and then transfered into casks which had been used to mature Springbank. The original used of the casks was to hold Barolo wine, a type of red wine made from the Nebbiolo grape which originates in the Piedmont region in Northern Italy. Nebbiolo produces wines which can be very tannic when young, but offers increased balance and a wider array of fruity and herbal notes as they age.

Hazelburn was an active distillery in Campbeltown between 1825 and 1925, and in 1866, with an output of 192,000 gallons of whisky, was at the time the largest in the town. White Horse Distillers acquired the distillery in 1920, but merely used the warehousing to transfer over 124,000 gallons from Craigellachie in Speyside. Production stopped entirely in 1925 and the site was used solely for warehousing until 1988.

The buildings were bought in 1991 by the Hazelburn Trust for the sum of only £1, with the intention of regenerating the site into Hazelburn Enterprise Park. The warehouses were torn down in 1995, but the Enterprise Park never came to fruition. The remaining buildings are now home to the Campbeltown Learning Centre. Since 2005, Michell & Co who own Springbank and Glengyle distilleries have been bottling unpeated Campbeltown malt under the Hazelburn name.

Taste: The wine influence comes and goes. On some tastes the cherries and tobacco notes one would expect are present and on others it's much more muted. Odd. Stone fruits again and with peppery spicing present. The mouthfeel is oily and rich, however it's fair to say that the cracking ABV of 57.9% does include a fairly aggressive attack and a slight numbing to the mouth. So, water then right? Actually no. Whilst the addition of water allows the nose to be more expressive of the Barolo cask, the mouthfeel quickly becomes diminished heavily.

Finish: Short to medium, dry and refreshing with gentle spicing which favours pepper.

This is a difficult whisky to summarise. There are certainly vagaries of the Barolo influence, and I can see why some reviewers think it’s too much and others barely notice it at all. The sweetness is high, but well-judged and would pair up wonderfully with particularly salty food for a contrast. However, this whisky is crying out for water and yet doesn’t behave particularly well when you give it some. Arguably more successful unaltered, but then it’s coming in pretty hot. Interesting though.