We've never had it so good 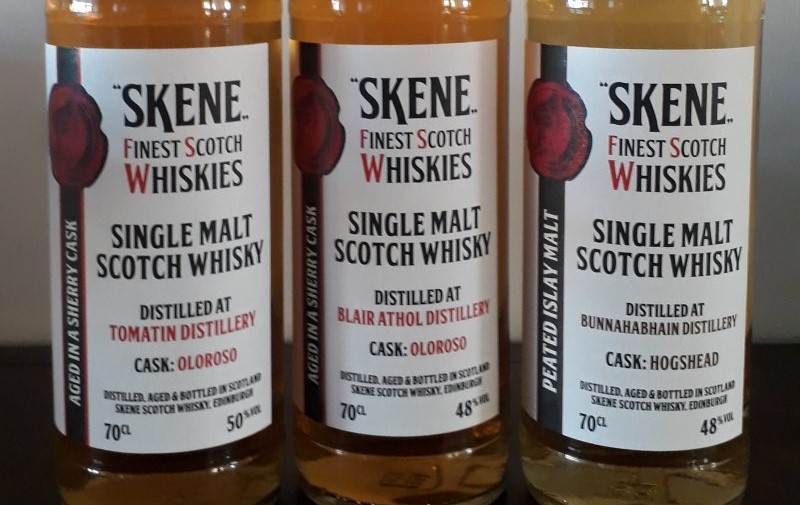 I’m afraid that over the years many of us have allowed ourselves to become rather spoilt. It’s all too easy to spend far too much time griping about the availability of limited editions, complaining that whisky is becoming inaccessibly priced and moaning about perceived unfairnesses in allocations. That is not to say that any or all of those things don’t have merit but taking a step back from the negatives (which you’ll find in any pursuit or hobby) I’d argue that today, right now, is possibly the best time to be part of the wider whisky enthusiast community. You might not think it…but we’ve never had it so good.

Listen. There’s little point in reminiscing about how whisky was cheaper in times now past. Of course it was. So were houses. And so were cars. Two things which in the grand scheme of things are likely of more import to day-to-day life than booze. But whilst it’s a fact that you could certainly get more bang for your whisky buck back in the day – it is also vital to recognise that the whisky market and enthusiast base looked completely different in those times. I dare say that a fair number of you reading this post started your whisky journeys within the last five years – and if so, you’re coming in at a time when the hobby can indeed be expensive (if you let it), but what you have now that I didn’t have when I began my exploration twenty years ago is choice. Incredible choice. 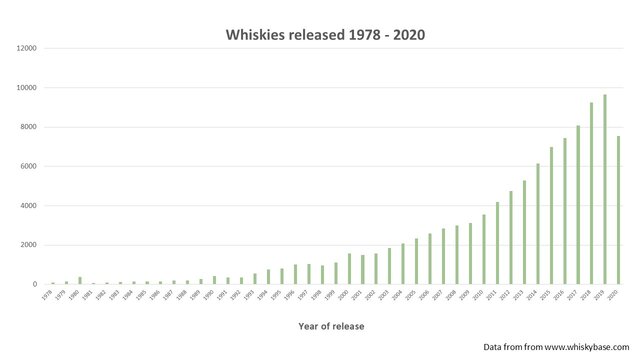 Whilst the quick extrapolation above comes with some caveats - it does not account for all whiskies, nor duplicates made in different sized glassware, nor the simple fact that more people are logging new releases now than digging into the bottlings of the past – it nevertheless paints an incontrovertible truth – there’s more whisky being released now. Massively so.

Oh, and I’ve started from 1978 because it’s obviously the most important of vintage years.

Choice of products is a fundamental and desirable trait of a mature market. And whilst whisky, and particularly world whisky is still very much on an ascendent trajectory, this diversity of choice reflects the wider growth of interest and desirability of whisky. And you can see this mimicked by the number of new distillery openings, the number of retail outlets and physical shops and the number of whisky clubs and tasting nights. All of these things are now incredibly more popular and more populous than they once were. The opportunities to buy whisky, to share whisky and to discuss whisky with likeminded people have become democratised to an extent where whisky, when taken as a whole, looks completely different to those days that some people think of so fondly. And that’s saying nothing of the concept of the liquid being “a man’s drinks”. Sadly, some things seemingly take much longer to change.

But when looked at through today’s lens, whisky is more vibrant than it has ever been. And when coupled with the explosion of different bottlings – the exploration of the liquid, its history, significance and people have never been more of a richer vein to mine.

Where the difficulty seems to stem is with the type of choices whisky drinkers feel they have. It’s true – back in the day, barring a few notable exceptions everything was much more accessibility priced (though not necessarily more accessibly acquired!). £100 in 2000 terms equates to £175 in today’s money. And yet we’ve seen those price points move several times beyond that inflationary marker. The issue is not with the diversity of choice of whisky – it’s because of the perceived desirability of certain bottlings that then push the price brackets for certain distilleries, distillates and cask styles.

Folks don’t just want ‘a’ whisky. They want ‘that’ whisky. And this concept has exploded over the last few years and particularly during a locked down 2020. The demand for specific releases that are perceived as either sought-after or potentially ‘valuable’ has grown far beyond the market’s ability to produce such whiskies. As I regularly state – a single cask possesses a volumetric truth.

But if you ignore the brand names, the labels and the notions of limited, super-duper, extra special releases – it has never been easier to get hold of decent whisky. It might not be ‘that’ whisky. Indeed, it probably isn’t ‘that’ whisky. But then ‘that’ whisky is not designed to go around everyone. It’s not produced so that we all can have a bottle. And if it were, it would not in turn then be ‘that whisky’ –  something else would be deemed as more desirous.

Whilst there is unrivalled choice within the modern whisky market, people naturally will always want what they either can’t have, or what they believe is something to covet over and show off to their fellow enthusiasts. “I have what you cannot get”.

But if you’re able to take the notion of ‘that’ whisky out of the equation and away from the top of your mind, there is still a raft of affordable, accessible and easily available whiskies. Indeed, barring an expected contraction in 2020 due to Coronavirus, I can only see the number of bottlings ever increasing. Perhaps we would all do well to try to extract ourselves from the echo chambers of social media to help us more easily recognise that in many ways, we’ve never had it so good.

Today’s review segment is a trio of releases from Skene Whisky. A brand which I’ve already noted in the past is under the radar for many and in need of a little more marketing love. But in the context of today’s musing, all three of these releases highlight that tasty, accessible, affordable whisky is still alive and kicking if you’re prepared to look for it.

A youthful Blair Athol that’s been matured in an oloroso hogshead (#900093) since 2015. Bottled at 48% ABV at the end of the last year, this will set you back a notably reasonable £37.95 directly from the Skene Whisky shop.

Nose: Margarine spread over crackerbread together with hot cross buns that have been packed with plenty of sultanas and scatted atop with mixed candied peels. Cooking apples are preserved but slightly soured by lemon juice whilst an agave-like note expresses succulent vegetation. Reduction presents orange peels and jellies whilst also revealing the underlying maltiness of the Athol spirit.

Taste: More focussed on the sherry now. Fresh plump raisins and cranberries are whipped into chocolate cake. Coffee grounds and dark ganache are joined by a flint striker from a cigarette lighter whilst in the background, metholated oakiness lurks. The addition of water offers raspberry Halls cough sweets and old orange liqueurs. It also articulates much more of the cask with dry, shaved oak and plenty of tannic bite.

Finish: Medium to long with a pang of minerality alongside biting charry oak and residue berry fruit sweetness.

This Skene Blair Athol is young, fun for your tongue. There’s plenty of likeable character here – both of the distillate and from the sherry cask which largely complement each other throughout. Just a touch of struck match and some oak-led astringency hold it back from being quite the hit. Nevertheless, for the price this is far from lacking.

Laid down in 2015 in a 1st fill oloroso sherry cask (#990461), this Skene Tomatin was released towards the end of 2020. Bottled at 50% and with only 185 bottles available (a smaller cask? Or cask share?) this release clocks in at a price which is eye-opening for all the right reasons - £35 from the J.L. Gill shop online. Woozers.

Nose: Millionaire’s shortbread is served with apples dipped in thick crunchy toffee whilst golden cereals are joined by Shredded Wheats dusted in fine sugar. Peach slices develop and are accompanied by a dollop of thick whipped cream, whilst a cup of mocha is supplied with a side plate of chocolate covered digestives. Dilution is all of the Twix bars alongside vanilla-piped choux buns.

Taste: A similar, welcoming profile awaits on the palate. Bramley apple sauce and freshly picked Granny Smiths join bubbly honeycomb and rich caramel sauce, whilst heavily reduced mixed red and black berries are transformed into jams and preserves. Fabric is expressed with canvas sack bags whilst liquorice is pepped up by a measured addition of pepper and powdered ginger. Reduction here presents a soft and silky texture with a spicier underbelly – cloves and cinnamon added into the aromatic mix.

What this Skene Tomatin loses in a narrow profile, it more than makes up for with balanced deliciousness. Despite spending the best part of 5 years in a 1st fill sherry cask, the influence here has centred more around toffees, caramels and chocolates – with berry fruits as a welcome support. And all of these favours pair exceedingly well with Tomatin’s fruity spirit style – and a decent bottling strength also helps make for an impactful whisky, which at £35, is in my opinion something of a bargain. Perhaps it doesn’t have the pitch darkness that seems to send sherry lovers into a hue-induced tailspin? Regardless, you can’t argue with tastiness.

Closing out our Skene Whisky trio is a vatting of two concurrently filled, peated Bunnahabhain hogsheads (#878 and #879). Distilled in 2013 and bottled at the end of 2020, 504 bottles were released and are still available via the Skene Whisky online shop for £42.

Taste: Sweet with peat. And a somewhat unexpected development. Smoked orchard fruits give way to antiseptic cream before a combination of lime and lemon zest erupts with a tangibly ashy combination of fireplace cinders and coal dust. The speed of this transitions is unexpected – feeling like a compressed download that will take several sips to properly unpack. In the back palate - dark woods and medicinal, mentholated oakiness are joined by a sprinkle of salinity. The addition of water increases the sweetness levels with lemon gel and candied lime zest alongside hewn limestone, sticking plasters and floor cleaner.

Finish: Medium to long with minty medicinalness and lemon drops together with sustained ash and coastal rockiness.

The peat influence of this Skene Bunnahabhain is far from a sedate back seat passenger. It’s firming in the driving seat – and at times feels like the breakneck speed of a wild ride. But despite this lack of structure, the composition is certainly enjoyable if you like your smoke straddling a variety of influences from maritime to medicinal via a woodland. As with other Skene bottlings released at the same time, this is pitched at a considerably lower price than many bottlers are pushing – particularly for this style of heavily peated Bunna. Not flawless – but there’s still plenty of beauty and enjoyment in imperfection.