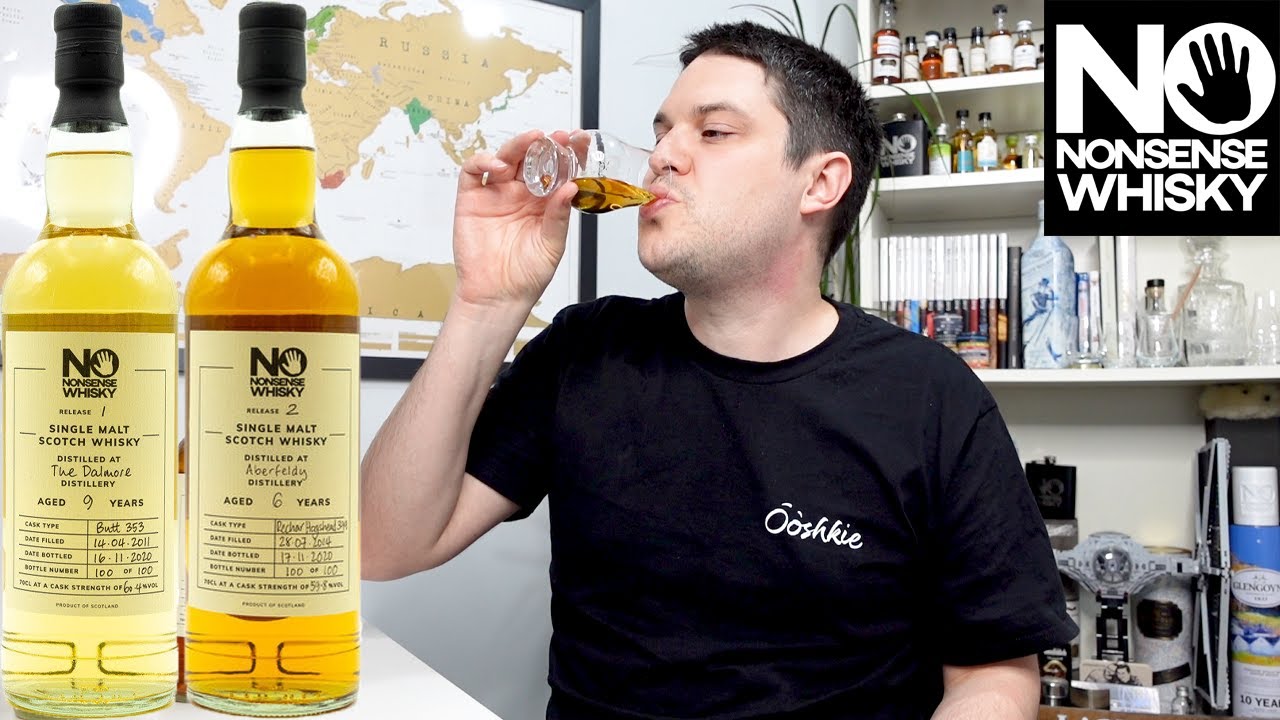 Few who pick up a tennis racquet should expect to go on to play at Wimbledon. And treading the boards at a local amateur theatre company doesn’t signal that Hollywood will ever be beckoning. Sadly, not everyone is destined for greatness – though of course we all should certainly dream and aspire – that’s just to be human. When it comes to whisky, the story is similar - not every cask has the composition, character and attributes that mark it out as being of exceptional quality. And that means that not every whisky should be considered as being suitable for being bottled as a single cask. Sorry whisky – no tournament trophy or Oscar’s ceremony for you.

As a necessity of the market, a significant tranche of liquid is fated to be compiled into larger vattings. And an even larger volume is designed to become blend filler. There’s absolutely nothing wrong with those purposes – they are part of the inherent nature of maturation – many casks are run of the mill. And indeed, some are simply shoddy.

But such is the cult of, and demand for, single cask bottlings that numerous vatting and blending whiskies end up being bottled and therefore put on a pedestal as something they were never intended to be.

This is not a new practice – it has existed for decades. Whilst we always remember the extraordinary releases of the past they too were surrounded by the undistinguished and unremarkable. However, as an ever-increasing number of people flock to an increasingly buoyant whisky market – on the false perceptions that single casks are either some type of liquid pinnacle, or a get rich quick scheme – the number of mediocre, run-of-the-mill casks being foisted into a single cask format is growing. And this will only lead to dissatisfaction and disenchantment.

There are many more people wanting to bottle whisky than the number of casks held in inventories available to indy bottlers – or the number being currently filled for such purposes. Indeed, many distilleries don’t offer cask fills specifically for the trade – you get what’s available from the stock once the distillery itself has taken its pick of its own treasures. As such the prices for cask purchases have skyrocketed. You don’t have to look far to see both new distilleries asking hellish sums for new make fills and brokers pitching rows upon rows of perfectly average looking casks but at investment grade pricing. When you couple this with a proportion of knackered wood that distilleries have eagerly passed on, and the more unscrupulous brokerages are even more eager to sell to the unwitting and/or overenthusiastic - you’ve got a recipe for a modern cask market which can best be described as challenging.

If you’re considering cask purchase as a means for making a quick buck, in the current market I’d strongly advise you to think twice. And at the very least do your homework – lots of it. There’s both a growing number of unscrupulous practices ranging from unrealistic expectations of returns through to small print caveats around cask ownership (make sure you actually own it!), and a large number of costs and eventualities you need to consider beyond simply buying the cask itself. Getting from the cask into bottles for your friends and family is one thing – from the cask into bottles and onto the market for sale is quite another.

And that’s saying nothing of ‘the competition’. Many established bottlers have both the knowledge and the contacts to ensure that they’re both getting the pick of the best casks and have well-tuned mechanisms for ensuring that their products are visible and accessible from a purchasing point of view. Even some of the newer bottlers who have be founded over the last few years have been established by industry ‘old hands’ (e.g. Watt Whisky and Whisky Sponge). These folks fully understand the whisky market – much more so than simply what is in the glass itself. They appreciate that not every cask is the same. That not every cask is an investment opportunity, and not every cask possesses the attributes which will mark it out as being suitable for being bottled ‘as is’. And this brings with it the notion (and skills and experience) to recognise that natural abv (cask strength) is not always the de facto best point to bottle a whisky in terms of allowing its character to shine the brightest.

Looking at cask purchasing as a means for enjoying whisky is certainly something that many of us aspire to – and why not? Either waiting patiently for your whisky to develop and mature or sharing a dram from a bottle which bears your name is both an exciting concept and your own little piece of liquid history. However, there are a great many pitfalls to avoid. Even more so if you’re considering bottling as a business opportunity.

There are people much wiser than me who will likely give you some hard but possibly free advice. But at the very least I’d recommend continually repeating the mantra – ‘not all whisky should be a single cask’.

Today’s review segment comes courtesy of the popular (and recommended) YouTube Channel No Nonsense Whisky who have recently released their first foray into indy bottling. And to my mind, whilst one of these casks is an interesting and tasty offering, the other most certainly has me questioning as to why it was judged as suitable to be bottled as a single cask release.

Following the recent trend of bloggers/vbloggers/Instagrammers getting in on the indy bottling act, Vin PF who hosts the always very watchable No Nonsense Whisky YouTube Channel has gone and released some whisky of his own. And this Dalmore is one of two first releases from his new bottling label.

Drawn from butt #353 which was filled on the 14th April 2011 this was left to mature for 9 years before being bottled on 16th November 2020 (and it’s notably pale). 100 bottles have been produced at 60.4% – so presumably the rest of the butt is somewhere else? You can pick one up via Ooshkie – a new whisky subscription service and online shop – for £75 or seemingly less if you opt to take out a sub.

Nose: Rather primordial with barley and yeasty breads and doughs alongside copper polish and wool. Peeking through the mire of new make-esque aromas there’s crème brulee, green banana peels and grassiness. Reduction does indeed offer some of the cask influence with vanilla extract together with maple syrup drizzled pancakes.

Taste: Hostile on the arrival with a kick in the nether regions of raw spirit (60.4% is too much for this). And then a fairly rudimentary selection of freshly cooked distillate notes – grassiness, wire wool and barley water alongside orange syrup, toffee apples and almond paste. Dilution offers a much even and un-numbed palate experience that’s extremely ingredients based – tons of barley sugars, cereals and fresh apples.

Finish: Quite long and focussed on touches of chocolate alongside baked breads.

Whilst this No Nonsense Whisky Dalmore does offer something laterally different to OB bottlings from the distillery (and that’s interesting enough) it has sadly been extracted from an utterly exhausted Nth fill cask. As such, it has done remarkably little over its 9 years of maturation, to a point where I’d describe it as almost proto-whisky. I would happily champion all eager drinkers tasting some IB Dalmore drawn from an ex-bourbon cask to better understand the profile of the distillate and, as such, quite how buried behind sherry and wine foolery it can become. However, this release isn’t that – indeed, it too comes from a butt – a butt that has had next to no influence on the spirit over the best part of decade. There’s a world of difference between what might be described as a ‘naked’ whisky and what is quite evidently totally undercooked.

The second bottle from No Nonsense Whisky’s inaugural independent bottling adventure hails from Aberfeldy. Drawn from a 6 year old re-charred hogshead (#399) this release of 100 bottles has been delivered at a cask strength ABV of 59.8%. There’s still bottles left via Ooshkie for £45.

Nose: Fresh and breakfast-y. Sliced Granny Smith apples and Comice pears sit with milky breakfast cereals and a bag of muesli. In the background – damp oak joins delicate floralness from cut garden stems, whilst underlying chalkiness provides a diversion. The addition of water reveals an inherent creaminess with orchard fruits whipped together with Chantilly, set against rolled pasty and batter mix.

Taste: Impactful on the arrival. A rush of zesty lemon and chalky minerality transposes into vanilla sponge cake drizzled with honey. Cider apples and apple syrup join creamy toffee, whilst reeds and flax provide a supporting element of herbalness. Dilution results in a very pleasant re-composition where the character of the distillate speaks quite loudly – fudge, golden honey and nougat set against orchard fruits and sunflowers.

Finish: Medium in length with a fairly among of leafy character and a final tingle of pepper.

Out of the bottle this 6 year old Aberfeldy from No Nonsense Whisky provides some concentrated and expressive aromas and flavours – albeit still curbed by its youth and with a little bit too much punch for the profile. However, with some careful reduction (50% ish) there’s an agreeable fresh and refreshing whisky here that’s both true to its distillery roots whilst also being pretty tasty to boot.