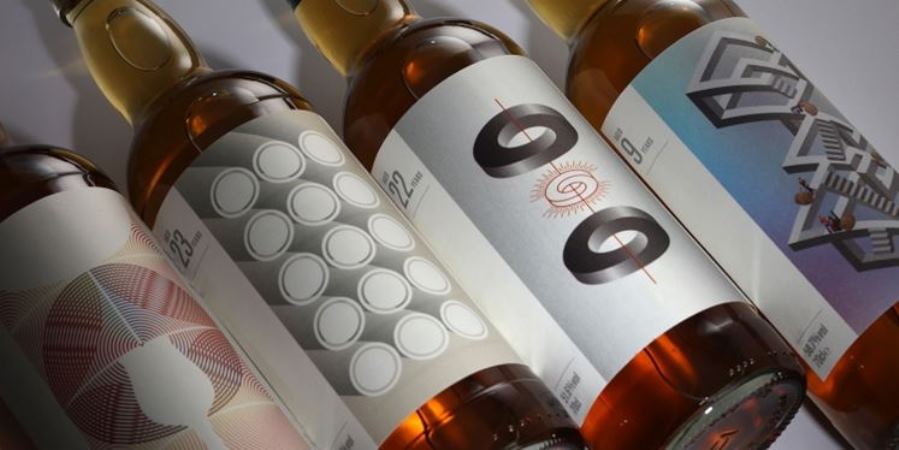 Despite spending much of my career working in and around the sciences, there were many times when I found science classes particularly dull. Applying Newton’s Second Law of motion to calculate inertial mass (m= F/A) is not something that the vast majority of kids ever find particularly exciting (though it's rather useful to the planet that there’s always an interested minority). Like many of a young age, I was always more stimulated by things I could immediate visualise – A litmus test. A bunsen burner packed full of magnesium ribbon. Simple pleasures. As such, this year’s Whisky Show London exclusive bottlings quite literally caught my eye.

Last year, the lenticular (a multi-layered technique which, depending on the angle of viewing, feints a 3D or stereoscopic effect) labels which adorned the series of three Whisky Show exclusive bottling were quite unlike anything I’ve seen on a bottle before. Striking, original, and frankly a conversation piece. A very tough act for TWE’s Creative Director Raj Chavda to follow. But, you know, he might have just pulled it off with the sense of childlike wonderment which arises when looking at the 2019 bottling using the (provided with every purchase) UV torch.

There’s a surprising number of things which fluoresce under various forms of ultraviolet light – tonic water glows vivid blue, chlorophyll glows a deep red and teeth whiteners just look tremendously silly. Fluorescent substances absorb UV light and then re-emit it almost simultaneously. Energy is lost in the transference, and hence, the emitted light has a longer wavelength than the absorbed radiation – the net result – the re-emitted light is visible and appears to glow.

For this year’s Whisky Show bottlings, custom label paper and UK activated ink have been used to dramatic effect – adding additional creative layers to the abstract bottle designs. When revealed by UV, these flourishes feel very in keeping with this year’s show theme of ‘The Journey of the Cask – and the idea that until you open a cask, its nuances and secrets are largely locked away. Illumination also reveals the specifics of distillation dates, maturation and cask types.

Those not adverse to spoilers can watch the effect on the front of the labels in this short video:

Of course, this is all a gimmick. But, it’s a gimmick which greatly appeals to my inner child - sitting in class waiting to be wowed by the power of science. Wonderment and whisky – it doesn’t come around all too often before the cork is popped.

In terms of the liquid – and that is afterall what you’re here to read about - each of the four bottlings is designed to showcase a specific aspect of the inherent qualities of particular type of casks, recognising that the story of the wood commences long before any spirit has been filled into it. The bottlings will be available for attendees of the show, but will also appear online and in the Whisky Exchange’s shops after the weekend has concluded.

The youngest bottling from this year’s series of London Whisky Show exclusives comes in the form of a sherry matured 9 year old Caol Ila. But it’s potentially not just any sherry matured 9 year old Caol Ila. When the Whisky Exchange team were trawling through a sea of stacked casks, they noticed one which was stencilled with the name ‘Gonzalez & Byass’ – a name which sherry producer Gonzalez Byass (dropping the ‘&’) ceased trading under over a 100 years ago. Does this mean that the sherry cask is over 100 years old – well maybe, maybe not (things are filled and refilled for periods of time – some of which can be quite lengthy). But it’s certainly exceedingly old by modern standards and not a 'seasoned' cask which most distilleries now extensively utilise.

Taste: Viscous, with plump fruitiness and impactful smoke which steadily builds throughout the development. Toffee apples, pear juice and lime-packed margaritas lead off, followed by smouldering leaf mulch, moss and ferns. Smoke rolls in like a wave with brick charcoal, hearth ashes and a quick swipe of antiseptic cream. The mid-palate favours more patisserie sweetness with pain au chocolate and cacao powder sitting with peppery oakiness. The addition of water is all about meatiness – BBQ ribs, burnt ends and reduced stock – equal parts sweet and savoury.

Despite its relative youth, this Caol Ila shows wonderful interplay between its inherently powerful spirit character and a fruity and sweet cask influence. The combination is not only surprisingly drinkable at 58.7%, but also nuanced – offering a memorable journey through a variety of shades of sweet into peat. The fact that this also takes reduction well is another string to its bow.

The UV activated ink on this Ben Nevis highlights the link between Jerez in Spain and Scotland - which means of course we’re talking about sherry casks. Whilst some would likely disagree, I’ve always felt that unchecked sherry influence has a huge potential to run roughshod over the top of a spirit, reducing its complexity and lessening its nuances. In effect – delivering something which tastes primarily of boozy sherry. This Whisky Show exclusive acknowledges the differences that 1st fill and refill sherry casks have on a maturing spirit, and opts for a more the restrained refill approach.

Nose: Immediate sherry opulence – raisins, fig rolls, dark macerated cherries and berries sit with demerara sugar sponge cake and roasted cashews. An elegant sweetness. Deeper, the character of Ben Nevis is still very much intact with leafiness and mosses joined by a sense of industrialness with pan oils and axle grease. In the background, savouriness – eggy bread dusted with icing sugar – ergo French toast. The addition of water adds bright fruitiness with strawberry laces and fondants served with a side of chocolate petit fours.

Finish: Medium to long in length, offering plenty of chocolate and cinnamon spicing with mentholated oak.

Ben Nevis is a whisky I often seek out due to its versatility across both age and cask type. Here, the configuration is quite excellent offering controlled but lavish sherry influence alongside a spirit which both suits it, and stands up to it. Certainly more subtle than the 1st fills from this distillery that are circulating around – and in my view all the better for it.

The press release describes the refill ex-bourbon barrel used to mature this 23 year old Imperial as ‘inactive’ - which is likely doing it something of a disservice, at least in terms of those with fixed perceptions. There’s a lot of contention around both the ideal level of activity a cask should possess and the number of refills it's used for – one person’s knackered old cask is another’s sympathetic mellowing vessel. To my mind the dividing line is often not as cut and dry as is sometimes suggested, and can greatly depend on the personal taste of the imbiber. Regardless, all other things being equal, a long maturation in a less active refill cask should allow the inherent character of the spirit itself more room to shine – and if the overall balance is right, then you should be onto a real winner.

Nose: Lacquered wood panelling and glorious lemony polish sit with an array of fruit and confectionary sweetness – mango and guava with cotton candy, iced gems, soft Italian meringue and marzipan. Running throughout, homemade lemonade and gingerbread men alongside buttered bread and an assortment of chopped kitchen garden flowers. Dilution adds orchard fruits into the mix – apples and pears – together with chalky cream cakes and buns and additional green leafiness.

Taste: The arrival is gentler than one might expect – an effervescent combination of confectioners’ sugar, meringue,  and dried tropical fruit slices. These are served with fondant icing and marzipan (I.E. a wedding cake without the actual cake element – just the sweet stuff). The mid-palate introduces spicing – pepper, cinnamon and nutmeg, which build steadily and then transposes into bitterness alongside a backdrop of guava, mango, lemon peels and balms. The back-palate treads a similar path, but sadly takes it just a little too far - still all on fruits, but now under-ripe and increasingly soured. Ack - frustrating, we were riding the crest of a wave until this point. Reduction offers an interesting change of direction – steeped green leaf tea with brass polish, cream cakes and touch of anise and angelica.

Inches away from a classic. Whilst this Imperial offers consistent sweet fruity treats alongside the notes of a sympathetic two decades of maturation, the back palate and finish have just tipped over the edge of bitterness/sourness. Whilst there’s not too much ABV scope for dilution, experimentation is still encouraged and offers deeper insights into the underlying distillery spirit character. Nearly impeccable.

If you’ve been following the independent bottling scene over the last couple of years (particularly on the European side) you’ll have likely observed a number of well-aged blended malts (often from a base of Edrington malts) hailing from 1973. This Whisky Show exclusive bottling sounds immediately like one of these well-regarded expressions – however, its UV light reveal highlights a different journey. The component malts (of an unspecified number, but hailing from Speyside) were matured separately until 2005, and then married (in Glasgow it says in glowing fluorescent light) in a single refill sherry butt (#6) for an impressively long finishing period.

Nose: No hiding the length of maturation here. This is pretty austere. Apple crumble and bread and butter pudding sits with raisins and sultanas, whilst macerated cherries and red berry jam is joined by balsamic sharpness and plenty of dusty mahogany and ebony wood flooring. Demerara sugar is scattered atop of everything, whilst a slice of chocolate gateaux is served with scorched waffles (blackening at the edges), sunflower oil and a handful of potpourri.  The addition of water emphasises orchard fruit elements as well as bakery – apple flans and pear tarts alongside shortbread biscuits.

Taste: Rich, viscid and highly impactful. Unsurprisingly oak is up first – panelling, sheened tables, dusty parquet flooring and leather armchairs sitting in old libraries. Woody, but again, austere and refined. Brown sugars and cola cubes are joined by 1970s orange liqueurs whilst grapefruit tartness and lemon polish balance the combination of sweetness and old wood. The back palate delivers spice with cinnamon and nutmeg, whilst dustiness of cellars is joined by plenty of charred cask ends – off-sweet, but not quite bitter yet. Water is a less profitable addition than on the nose – whilst it adds dark chocolate and cacao nibs it quickly reduces the overall poise and definition of the composition  as a whole – such is the way of old and delicate things.

Timeworn four decade plus whisky doesn’t have to equate with being spent, over the hill and meek. This blended malt still possesses the underlying vibrancy of its distillates with a defined fruity overlay from a long refill sherry but finish. Of course, given the age, there’s plenty of antique oakiness here, but the marriage is undeniably elegant.