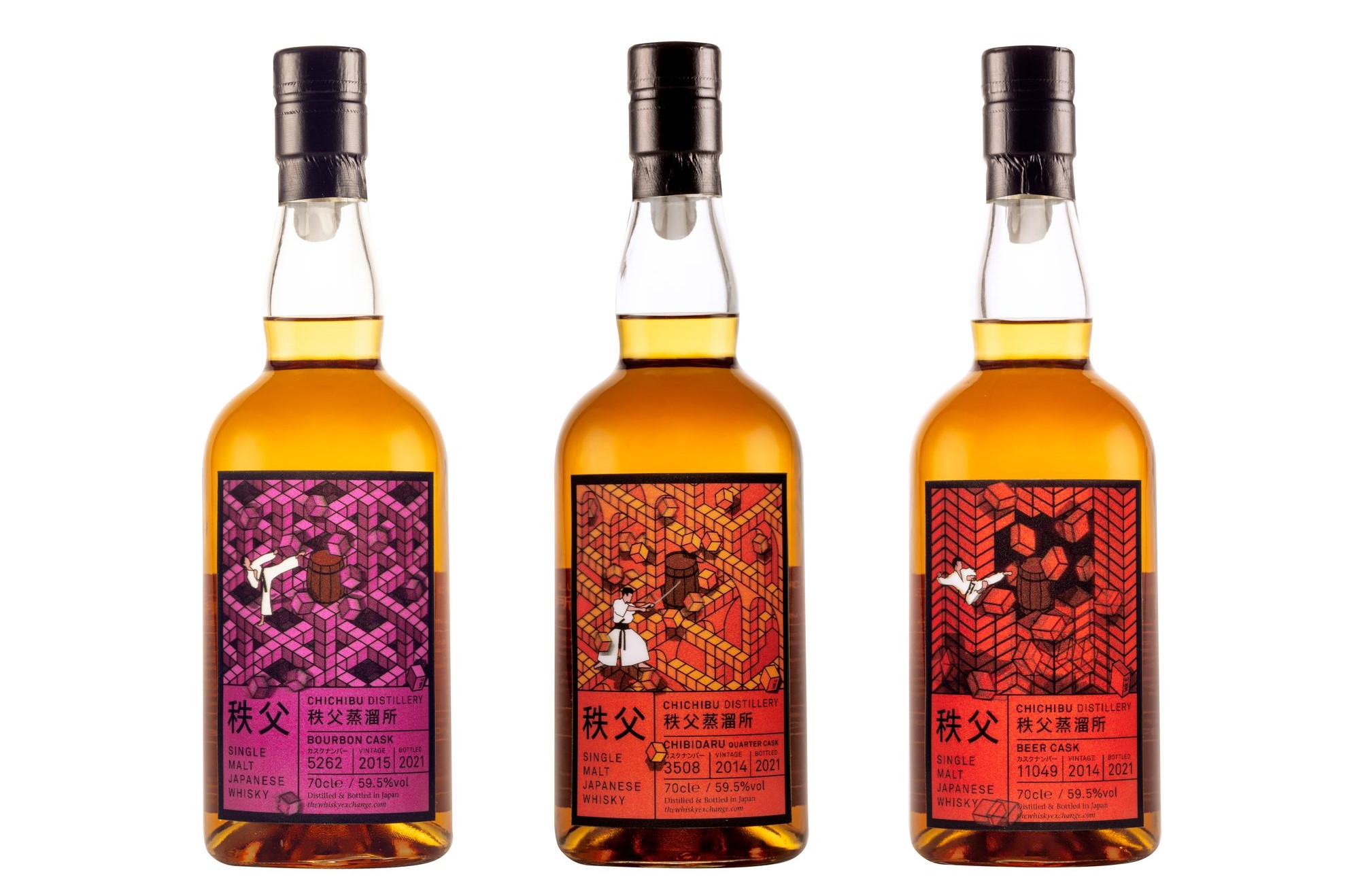 The ‘rule of three’ is an age-old writing technique that suggests that things that come in threes are inherently funnier, more satisfying and more effective than any other number. Veni, vici, vidi. The Three Wise Men. Of the people, by the people, for the people. Once you start to notice it – you’ll see threes absolutely everywhere. Beginnings, middles and ends. Past, present and future. Mind, body and soul. This prevalence isn’t anything mystical – it’s simply the smallest number that allows the human mind to recognise a pattern. And as such, it is also a perfect threshold for the packaging and marketing of products – whisky included.

The rule of three has been applied to countless speeches, product launches and presentations. An excellent example of this comes via Steve Jobs who applied the rule in nearly every Apple presentation he made. A particularly notable instance being the launch of the first iPhone in 2007 where here announced “three revolutionary products” – a new iPod, phone and Internet connection device. Following the ‘revolutions’ of the Mac and iPod, the third time was indeed a charm for the company.

Talking specifically about whisky you don’t have to look far for the rule - Arran’s Smugglers’ Series, Bowmore’s Devil’s Casks, Glengoyne’s Legacy Series - all consist of three bottles. Indeed, visit many a distillery and the opening gambit of “barley, water, yeast” will immediately set those same wheels in motion. Three is of course far from the only number within the spirit – 5 Keystones, 6 Pillars – 52 (54) playing cards. However its ubiquity is far from a flash in the pan - as today’s review trio from Chichibu will attest to.

As well as being a relatively tangible number of bottles to commit to (should one decide to acquire all of them) – three provides the optimal number of opportunities to positively reinforce the same message around any product or series. All other things being equal, it has been proven that more than three marketing ventures results in steadily diminishing returns in terms of consumer interest. Three as a number also reflects the ideal quantity of product choices to offer to consumers at any given time - research consistently demonstrating that the greater the number of the choices there are above three, the lower the likelihood of someone actually making said choice.

TWE’s Chichibu Martial Arts Trilogy draws heavily from the power of three. Not just with its number of bottles, but also with its staggered, balloted release cycle running from August through October. Three releases, three different cask styles, three ballots, three months. And with reviewers being sent all three releases in advance – it likewise covers both the bases of providing the holy trinity of product choice *and* potentially three bites at the promotional cherry in the run up to the final ballot in October. Omne trium perfectum - it’s almost as if they’ve planned this.

In terms of the series itself, the Martial Arts Trilogy “celebrates the discipline and learning behind traditional Japanese martial arts and the parallels with the building of skill and knowledge required to be a master distiller”. Whilst there are label representations of what looks like Kendo or Iaido and Karate, sadly no Sumo is illustrated – surely that was a shoe-in for the beer cask.

The snazzy-looking labels have been printed on lenticular sheets ala 2018’s Whisky Show ‘Future of Whisky’ series (which featured four bottles, not three!) with the martial artists “breaking through the background of the labels to reveal hidden casks”. Each release is drawn from a single cask and will be priced at £250. All three are being offered via ballot – the first of which (the 2015 ex-bourbon cask) is available to enter right now. Those attending the (three-day) London Whisky Show at the end of next month will also have the opportunity to sample the series – all three whiskies will be available to taste at the Chichibu stand.

The first of TWE’s Chichibu Martial Arts Trilogy is drawn from a humble ex-bourbon barrel (#5282) that was laid down in 2015 and produced 233 bottles at 59.5% ABV. The ballot for this one is open now (until the end of today) – so interested parties should venture over to the TWE website to register. £250 is your entry price - hefty indeed - and no doubt influenced by the eye-popping prices that single cask Chichibu tends to fetch on the secondary market.

Nose: Orange sherbet, candy necklaces and barley water develop into peach melba, ripe cantaloupe melon and apricot jelly. Fruity stuff indeed. In the background spices percolate – chilli pepper alongside a touch of rock salt. The addition of water offers a sense of creaminess with fine confectioner’s custard together with meringue and Battenberg cake.

Taste: A tangy arrival of salt and pepper spiced peaches together with apple slices macerated in elderflower syrup. The floralness extends into the development before touches of wood polish, and shaved chocolate join char and caramel sauce. There’s a lot of scope for reduction here – and it takes it well. The result tends towards a much more silky arrival with amped up char and spice together with candied fruits and touches of mentholated oak.

Finish: Quite long and expressing cask spice chilli alongside lingering fruit-led sweetness and a tempering of residual salt.

A remarkably broad concentration of fruitiness (particularly on the nose) that completely belies the age of this whisky. Clearly this has been matured and drawn from a notably active cask as alongside the depth and broadness there is a tangible volume of oak spice. Personally I find this to be the perfect foil to the candied and syrupy sweetness that runs throughout – but if you’re notable spice adverse you might find it a little too piquant.

For the second release of TWE’s Chichibu Martial Arts Trilogy, you’ll need to wait until the 27th -28th September for the next ballot to open on the TWE website (with results being issued quickly on the 29th). There’s a limited number of bottles of this one  – just 119 – stemming from the fact that it has been disgorged from a quarter cask – otherwise known in Chichibu parlance as a Chibidaru (“cute cask”). Similarly to the other releases of the Trilogy you’re looking at a sticker price of £250.

Nose: Initially surprisingly medicinal with iodine and antiseptic set against more vegetal peat notes of smouldering leaf mulch. At the core is the characteristic Chichibu fruitiness – apricot, peach, Mirabelle and a glug of apple juice. Floral notes of sunflowers and field heather following alongside asides of dusty ash, char and caramel. Adding water results in a dramatic transformation with the fruit to the front and the smoke to the back – bright, syrupy stone fruits very much in control of the now slightly mineral peat smoke.

Finish: Medium to long with chiselled granite, fading damp smoke and a waft of cooling mint.

Quite remarkable. There are effectively two whiskies in here. The first at the bottled strength of 59.5% still has the expected distillery fruit-forward character, but it is enveloped in a firm blanket of inland/coastal smoke. The second at a reduced strength offers a striking rebalancing with the fruit and sweetness fully unleashed and the peat influence reduced to supporting act. That’s both complexity and adaptability – and I find myself becoming a quick fan of both the original and the remix. Easy pick of the Trilogy for me.

The final release of the TWE Chichibu Martial Arts Trilogy is a 2014 vintage cask (#11049) that was sent over to Tamamura Honten microbrewery near Nagano to make a limited release ‘Shiga Kogen’ Imperial IPA named ‘The Far East’. Clocking at a mighty between 13-16% ABV depending on the batch - reviews of the beer seem to peg it somewhere between a West Coast style triple/quad IPA (not messing!) and a barley wine.

No details of how long the brew was barrel aged for – but as you’ll read from my tasting notes below, the pickup from the cask is enormous. The ballot for this one will be open on the TWE website on the 25th and 26th October (draw on the 27th). No prizes for guessing either the bottled ABV or the price.

Taste: By the power of Greyskull. Far from an inactive cask this. Orange marmalade and citrus peels join candied grapefruit whilst week-old beer ferment and malt loaf sits with apricot, peach and plenty of barley sugars. The development is entirely beer-led – again West Coast – dry, bitter and with prominent (hot) hop influence leached into the very heart of the whisky. Honestly, I’m at a loss as to what this spirit actually is now?! Water dials things down considerable with floral characters of elderflower sitting alongside a developing chalkiness.

Wow. What just happened?! Where do I begin? Of the three releases in Whisky Exchange’s Martial Arts Trilogy this one is easily the most thought-provoking. But it’s also bloody weird.

Despite the combination of beer and whisky being something that on-paper should be very much up my alley – sadly this isn’t. I’m all for a specially selected niche cask having a central impact on the final shape of any given spirit – indeed, anything less and one should wonder what the point of utilising it was. However, this Shiga Kogen seasoned cask is just too robust and heavy duty to produce anything other than a whisky which expresses the constituents and character of the beer above everything else. Fascinating and challenging? Undoubtedly. Balanced and actually enjoyable? I’m far less sure.