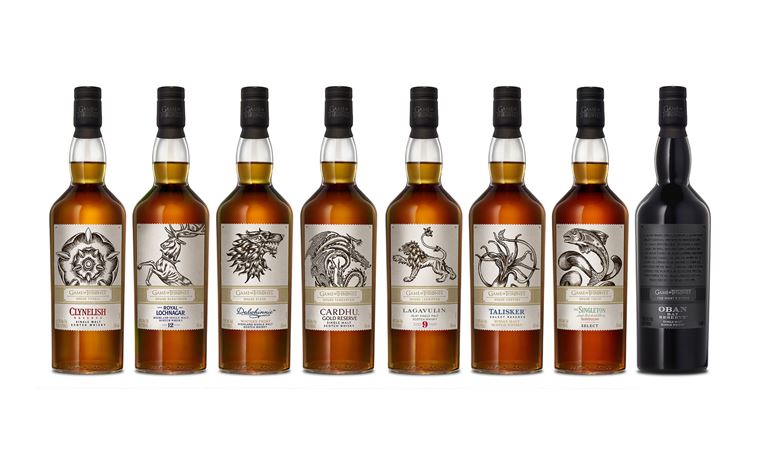 If you believe everything you read in the media, you’d come away trusting the countless headlines that suggest that ‘there’s never been a better time to invest in whisky’. In actuality, the opposite is true – there’s never been a better time to sell whisky. Those who stashed away bottles ten, or twenty years ago might well find large returns on some of your long-forgotten gems. But, in 2019, I'd argue that whilst there is obviously a lot of money to be made in whisky, it is largely from buying and selling quickly – I.E. flipping. The initial release of Diageo’s Game of Throne Collection was snaffled up at a rate only surpassed by that which they all appeared the following month at auction. Huge profits were expected. Huge profits largely failed to materialise. Several factors contribute to this game of fools – the sheer number of identical bottles and sets being sold at the same time. But, more importantly - the fallacy of the ‘limited edition’.

Whisky has seen a huge increase in what I’m going to term ‘profit entryism’ – an influx of interest into the market, largely driven by a desire to make a return rather than any deep-seated passion for the category itself. Headlines of big returns, huge sales and invaluable liquid has driven this. However, on the flip side, this entryism has resulted in positives – a buoyant market with growing employment and increasing global reputation. Nevertheless, some of our new entrants have shown themselves to be lacking in a fundamental familiarity with how the whisky market operates.

‘Limited’, in many circumstances means exactly what you want it to mean. At best, it can often be translated to ‘not available forever’. A few weeks back whilst wandering through travel retail I witnessed the Game of Thrones ‘exhibit’ (it really was quite a grand construction) swamped by a sea of jetsetters – nearly all of them asking which bottles were the best ‘investments’ – all of them being told by the sales reps about the limited nature of the GoT Collection. Falsehood and over-enthusiasm combined. Not one of them considered that the thousands of bottles on display might be a very strong hint at the abundance of supply – not one of them was told the truth – that in a little over a month, another mammoth tranche of bottles would be released. And yet, they persisted – bottles purchased, dreams of Ferengi-like profit on their minds as they wandered to their gates.

It’s a strange world that we live in where folks will believe that bottles priced between £40-£70 will somehow prove to be near priceless. But, at the other end of the scale are the habitual flippers who work on volumes - £10 here, £10 there – if you shift enough of them you’ve overall made a tidy return each month. And so it was that I found myself deeply amused by the results of the most recent SWA, where many bottles sold for their RRP cost at best. And to think – this is just the first month – how many more bottles are waiting to be sent for bidding?

In some ways, I see this as a watermark in whisky auctioning – not as some have predicted – the beginning of the end where the arse will fall out of the market (just not going to happen). But, of a moment when folks start to sit back and consider that whilst whisky can be valuable – that not *all* whisky is. When you play the game of fools, you win or you cry.

So, on that note, we’ll present the second instalment of our Game of Thrones Collection review. Four more house, four more bottles. It’s sadly another largely insipid selection of liquid, but with one notable exceptional courtesy of Islay stalwart Lagavulin. Whilst none of these bottles represent any type of investment, House Lannister is, to my mind the bottle to buy if you’re looking for something good to drink.

As Scotland’s highest distillery, this is not the first time that owners Diageo have tried to link Dalwhinnie to cold weather. Winter’s Gold – another in the continuing line of ‘serve from the freezer’ whiskies was released in 2015. And it seems that some retailers have got rather confused and are pitching Winter’s Frost with the same cribbed serving suggestion. Diageo do not seem to be making this claim this time around – they’ve already done so with JW White Walker after all. Nevertheless, I do not believe that *any* single malt whisky is improved via time spent next to your frozen peas – so, in either case, please don’t bother.

Winter’s Frost is listed as being 100% matured in ex-bourbon casks. It’s delivered at 43% and is available from Master of Malt for £49.63 – with a dispatch date at the end of May – when the second enormous batch of these limited whiskies is due to be released.

Nose: Fruity little number. Plenty of apple – Red apple, toffee apple, apple crumble – alongside poached pears and peach cobbler. Throughout – maltcake, baked loaves and a very hearty kick of vanilla essence. Reduction adds both cotton candy sweetness as well as emphasising the underlying spirit maltiness with barley and toasted cereals. All in all quite pleasant.

Taste: A nice initial weight (more than 43% would sometimes infer) is unfortunately not built on with consistent flavour. There’s little of the nose’s expressive fruitiness – more a vague sense of peach, lemon juice and raisin. Again, malts push through and are supported by both honey and hazelnut, but, this is super simplistic with little development to note. Water brings out some baked apples and ginger but dulls everything else into an ambiguous jumble.

After the welcoming fruit-forward nose, Dalwhinnie Winter’s Frost is over quicker than a red wedding. Whilst inoffensive, the palate lacks punch, definition and development – yes, the flavour combinations you’d expect from this distillery (fruity maltiness) are present, but they’re quite anaemic compared to the 1/3 cheaper 15 year old.

Of all of the Game of Thrones Collection bottlings, this one surprises me most with its house alignment. Oily, coastal, peated – Cersei, Jamie and Tyrion?! I don’t really get it. But, as tenuously linked as these bottles are, it’s nevertheless pleasing to see Lagavulin continuing a trend which stated a few years ago – namely that, of not being afraid to put age-statements on a younger bottlings. The 8 year old (now part of the distillery’s core range) turned some heads, and has to my mind, somewhat set a new direction for Diageo – despite years of asserting that ‘age matters’ and then years of doing the exact opposite, there’s now at least some occasional balance being offered. The company has wised up the fact that their customers drink things and know things.

The House Lannister 9 year old is composed of 100% ‘fresh’ ex-bourbon casks and comes in at a cost of £67.62 from Master of Malt – a fairly substantial step up in price from both the 8 and 16 year olds.

Nose: Surprisingly fruit-driven with tropical fruits (mango and guava) alongside raspberry meringue. The peat is also quite sweet – a combination of reduced smoked berries with brown sugar, tempered by brine, sea breeze and coal ash. Deeper – oven-roasted pork sausage, molten plastic and smouldering bracken and fern. The combination works particularly well, despite being much lighter than most bottlings from this distillery. Dilution adds treacle tarts, an edge of hayloft and barnyard as well as vegetal moss and leaf mulch.

Taste: The arrival is oily and viscous. Its first delivery is tangy sweetness – raspberries and strawberries with burnt caramel and pan sugars. It’s second – a billow of sooty ash and burning paper. Vegetation is present once again – wet hay and mosses and plenty of pipe tobacco. A gentle medicinalness runs throughout – not quite full-on iodine, but close – with pepper and cloves pushing through the development with some nice piquancy. The addition of water expresses charred meats, marshmallows, quartz and oddly palma violets – there’s complexity here.

Finish: Quite long and somewhat more medicinal with surface cleaner, ointments, ash, tart grapefruit and a pang of bitter oak.

Lagavulin 9 year old House Lannister is in my view streets ahead of the other bottlings in the Game of Thrones Collection. It is the only bottle that I’d consider buying myself. Whilst there’s a lot less peat oomph here than you might find in many other bottling from this distillery, don’t for one second believe that this lacks teeth. There’s impact here, it’s just more fruit-driven and subtle than a peated punch in the face. Impressively so given the ex-bourbon basis of this whisky - there’s a genuine difference between this 9 year old and other similarly aged expressions from Lagavulin. I’ve been waiting for a GoT bottle to impress me, and true to form, it’s the Lannister which pays the debt.

The House Baratheon entry into the Game of Thrones is a functional reprint of an existing bottle. But, interestingly, whilst other entries have you paying substantially more funky labels – the Royal Lochnagar comes in at around the same price as its clone - £37. The distillery is the smallest in Diageo’s stable, with the Royal Warrant dating back to 1848 and the liquid forming a key component of Johnnie Walker Blue label.

The bottling is delivered identically to its commonly available version at 40% ABV.

Nose: Orange juice alongside porridge and wallpaper paste. Quite malty. Quite mashy. Alongside toasted loaves, there’s gingerbread men and an array of unusual florals – camomile lotion, rose hips and sunflowers. After a short period of resting, this also develops some meatiness with fresh slices of honey-cured ham. All unusual, but quite intriguing.

Taste: Very dry and rather malty – rye bread, toast and barley sit alongside bracken, fallen leaves and holly. The mid palate adds some sweetness with bitter dark chocolate, whilst ginger, salt and pepper add some cask seasoning into the equation. Simple stuff.

There’s some oddness with this Royal Lochnagar 12 year old – but, you know what? I rather like it all the same. It’s not a carbon-copy apples and toffee entry-level whisky – so whilst the complexity levels are low, there are nevertheless points of difference which help it stand out a little from the pack.

There are several distillery’s with the ‘Singleton’ moniker – Glendullan, despite its relative large size is the one which, outside of travel retail, has been largely reserved solely for the US market. Mainly utilised for blended until 2007 when the Singleton of Glendullan was created for our American cousins, the distillery is therefore not one I tend to come across outside of independent bottlers here in the UK.

House Tully’s entry into the Game of Thrones Collection introduces the distillery to a wider audience. Sadly, I can find nothing about the cask makeup of the bottling, and it’s delivered at 40% ABV.

Taste: Again with apples and toffee, now joined by vanilla custard, dusty oranges and fruit tea infusions. There’s some charred bitter oak that pushes through during the development, but on the whole this is one note.

House Tully’s entry into the Game of Thrones Collection feels lazy. Whilst not the worst of the series, this is quite possible the most generic and boring. Straight down the line apple and toffee with little body or presence. Meh.