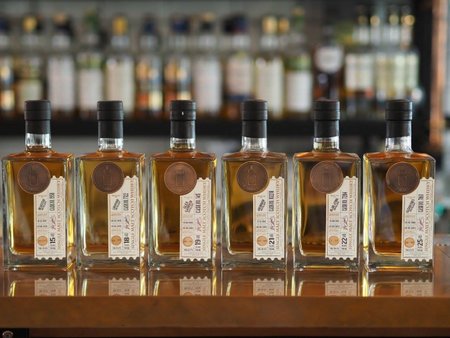 Life is all about accepting limitations – both our own and those of the world around us. Everything about whisky can be thought of as being limited in one manner of another – from the yield that’s possible from a barley field to the efficiency of a mash, through to the volume of spirit a still can physically produce. Similarly, us humans also have our own limitations – how much whisky we’re able to buy, able to store, and particularly, able to drink. You can’t always get what you want – but can folks get what they need? I feel like these last few months have put that adage to the test.

It should go without saying that COVID has not been good for the drinks industry. The on-trade is not looking like returning – particularly in any manner which will hold as wide an appeal as it once did – for some time. But, whilst bars and restaurants (and some of the businesses that supply them) struggle, alongside smaller craft distilleries who are most certainly feeling the pinch - much of the whisky community is simply sat at home continually buying bottles like there’s not tomorrow and drinking our way through every virtual tasting going. Indeed, many of them have never been this engaged.

And that’s OK. For the most part. People need an escape, need the social aspects of sharing a drink, and need to feel like their world is more ‘normal’ than it actually is - and similarly brands still need the exposure and the income. There’s arguably been a mini-boom within the boom in the level of interest in whisky. Going virtual, whilst a necessity, has brought with it an increasing number of new enthusiasts. But at the same time, whisky’s new (enforced) digital frontier has brought with it a whole host of increased expectations, impatience and at times downright unreasonableness.

Distilleries and producers are increasingly under a digital cosh. Continually bombarded with requests and requirements – some fair, some a lot less so. But these all come against the backdrop of operating with dramatically altered working practices. Things are inevitably slower. And whilst some people get this, others do not. None of us need ‘IT experts’ fresh into the world of whisky within the last three months telling us how our businesses should be run. And none of us can make what is a fundamentally limited product stretch any further than it’s possible to stretch. Certainly I don't need a barrage of PMs suggesting that I should be working harder to get more bottlings out the door - immediately after 9 hours straight packing shipping boxes. Increased entitlement and diminished capacity do not mix.

Whisky’s move to truly embrace the virtual is unlikely to be a flash in the pan. It has brought with it the potential of a vastly increased audience base. But at the same time the industry’s capacity to craft, create and produce is no larger - indeed it had been temporarily reduced. Even projecting forward into 2021 and beyond, there is now far too much demand that the supply can sustain every aspect of it. And that’s a bitter pill for some people to swallow. Particularly for those who feel that they have no limitations to the number of bottles they can purchase and store (but hopefully still some sensible limitations on what they can reasonably consume). Whisky is limited. But so too must be the expectations of it. Simply put - we're all trying our very best. Please accept both the limitations of the product...but also of the people who help produce it.

OK, rant over - on the flip side to limitations, the number of new expressions being produced was (at least until March) greater than ever before. Whisky enthusiasts are frankly spoilt for choice when it comes to their purchasing options. Accepting limitations doesn’t mean going without whisky – it just means looking further afield.

And that brings me onto today’s quintet of reviews – which opens The Dramble’s account of independent bottler The Single Cask – who also provide cask brokerage services and run a bar of the same name in Singapore. Rather than rewrite what is already known about The Single Cask, I’ll simply point you to this detailled interview with the company’s Director Ben Curtis by Dora over on Malt. Go check it out.

Transparency as always – these review samples were provided by The Single Cask.

Finish: Medium with ground cinnamon and pepper joined by residue heat and a persisting honey syrupiness.

A well-aged Tormore which highlights the spirit’s natural fruitiness as well as its inclination towards richer weightiness after longer maturation periods. The sherry influence is exceedingly light touch here, offering cask spice over overt sherry tones for the most part. However here that’s no bad thing – the spirit has been granted plenty of room to manoeuvre and the result is well-composed and enjoyable throughout.

Taste: Weighty on the arrival with lamp oil, greases and lubricants. Galia melon, kiwi and pear juice sit with polished oak whilst brass piping and moist earthiness are joined by lemon cough drops. A sprinkle of sea salt and white pepper is joined by spearmint and buttered bread. Water reveals a softer, fruit and spice focus with ginger pastries and cinnamon spiced apple compote.

Despite always favouring Tobermory’s peated output over its unpeated – this single cask proves to be a notable exception. It offers both a harmonious ride and some interesting vegetal/herbal asides throughout its well-balanced journey. The low-key refill (nth fill?) sherry influence works a treat, adding spiced nuance, but allowing the natural texture of the spirit (which results from the distillery’s fat, bulbous S-bend stills) to shine through. A very convincing cask selection.

The Single Cask’s 10 year old Heaven Hill hails from May of 2009 where it was filled into virgin oak before being bottled in the month after it’s 10th birthday in June 2019. A mere 130 bottles were produced from the barrel – however a little digging reveals that 60 bottles from cask #152724 were snaffled away as festival exclusive for The Village 2020 – an annual Nuremberg-based fair running since 2013 which brings together distillers, importers and of course drinkers. There are still bottles from the original 130 outturn available for £74.95 from Master of Malt.

Nose: Discernible apricot alongside unripe pineapple and banana skins. After a period of unravelling in the glass, orange sherbet is revelated together with shaved chocolate, nutmeg, eggnog and a soft vanilla oakiness. Reduction offers a larger cask influence with vanilla pods and creaminess (though spicing is maintained consistently) together with orange liquors and Battenberg cake.

Taste: Highly drinkable – even at the high strength – with little prickle and an arrival which glides rather than assaults. Foam bananas from the off, alongside stone fruit cobbler and drinking chocolate. Spicing builds with white pepper and cinnamon rolls alongside anise and charred oak staves. In the background a juxtaposition of leaf mulch and dry earthiness together with drizzle icing. Dilution is rather fun – and there’s plenty of ABV to play with. Buttercream icing, golden caster sugar, pancake mix and chopped almonds.

A Heaven Hill which eschews the extremes of sweetness, spice and power in favour of a surprisingly soft and approachable character. Bourbon masochists might miss the raw punch that this level of ABV can provide – but for the rest of us there’s an agreeable combination of discernible fruitiness and well-controlled virgin oak influence throughout. Very easy to like.

A mystery bottling from an unnamed Islay distillery that has been finished for an unspecified amount of time in a red wine barrique from Chateau Palmer’s Alter Ego range – a left bank Bordeaux vineyard from the Margaux appellation. 306 bottles were produced by The Single Cask – they’ve available (2 left as of writing) from Master of Malt for £87.95.

Nose: Smoked berries – cranberry jelly, redcurrant preserve and cherry bakewells, alongside a heady and aromatic mix of sandalwood, cedar and fir trees. Smoke is partly vegetal with smouldering fallen leaves and partly coastal with wet gravel, whilst cured ham lingers in the background. The addition of water presents lemon curd and BBQ briquettes alongside marker pen ink and peeling wallpaper.

Taste: A light and controlled arrival with minerality from singles together with ashy smoke and tart syrupy berries. A dry saltiness runs throughout, whilst red hedgerow fruits are smoked over an open fireplace and burnt toffee and metholated oak are joined by rosehips and asides of sweet hospital antiseptic and floor cleaner. Reduction reveals a cereal note – oaty and toasted – alongside dried paper and ozone.

A mystery Islay malt with a discernible red wine influence, that has brought with it some rather unusual – almost juniper-like – flavourings. The finish feels both restrained and let loose – there’s few sticky wine cask tannins, but at the same time, the intense berry fruits have tamped down the underlying smokiness of the distillate. The result is certainly unique and thought-provoking – but to my palate a little blunt in places. Wine casks can be challenging and this whisky most certainly is that.

Nose: St Clements (oranges and lemons) in the form of oils and liqueurs. Vegetal peat smoke from moss and fern leaves mixes with lemon balm, white chocolate and vanilla cream. In the background, petrichor, bromine and a swipe of antiseptic cream. Dilution adds textural cues – candle wax, grease and ointment – together with pine needles and iodine.

Diluted, this The Single Cask offering presents with a more typical Caol Ila profile. Straight out of the bottle, it’s notably left field with vegetal and herbal indications that, whilst tangential, still feel coherent with the overall profile of lemony medicinalness. Some people take distillate character ultra-seriously and do not always enjoy the deviations which single casks can and do offer. For those who enjoy those eccentricities – this Caol Ila has a few.