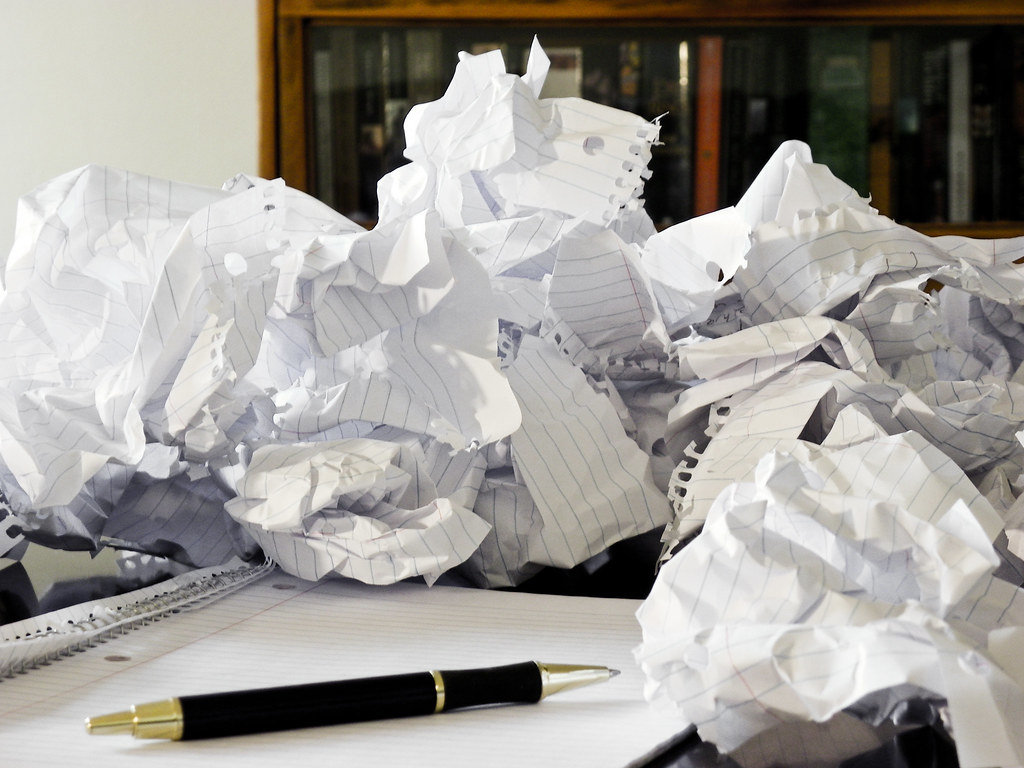 “I’m superstitious about writer’s block to the extent I don’t particularly feel like devoting a great deal of time to dwelling on it. It seems like getting stuck in a desert, a nightmare. But there are definitely times when the inspiration flows more freely than not. It seems to me that writing is a muscle: it gets stronger the more you use it. If you let yourself fall out of the habit, it can be hard to get back in form. Writing a regular column keeps you limber and sharp and guarantees that any fear of writer’s block is kept at bay.” John Alvon, Editor in Chief, The Daily Beast

Whilst writer’s block is often attributed to and discussed by the giants of the literary world, it has and will affect anyone who’s ever put pen to paper. The manifestation of writer’s block is usually visually depicted through the sights of full waste bins and floors littered with scrunched up papers featuring half-formed opening sentences. But the realities of writer’s block are both conscious and subconscious and are invariably linked to a feeling of fear. A fear of not knowing what to say, or how to say it. A fear of not being able to replicate past successes. And most of all, a fear of not knowing precisely what the correct step is to get the words flowing once more.

I experience writer’s block in some form most weeks. Often the struggle is micro – an inability to translate a thought or concept into a logical and/or elegant sentence. That’s quickly overcome. But sometimes, such as today, the struggle is macro – and I find myself with a complete inability to write freely….about anything. And that’s a pain in the arse.

My writer’s block is not related to the amount of research conducted – I’m always learning and expanding my knowledge. Nor is it related to not having anything to say – whisky is an incredibly rich topic for discussion – from processes, people, practices and passions – there’s never a point in time where there’s not something interesting to dissect.

No, my blocks – when they happen – usually stem from a fear of not doing proper justice to a particular topic. Of having a snapshot of what I want to communicate but coupling that with a growing sense of anxiety that only an outline won’t be anywhere near good enough to flesh out into a fully formed piece. Sometimes that dread is quickly overcome – the words stream onto the page far easier than expected. Blessed relief. But on other occasions, and much like many who have come before and will come after, opening sentences are written, re-written, abandoned, re-composed, abandoned again and read repeatedly until the words might make sense, but all semblance of onward direction has been lost. And on those days, I usually just down tools and walk away. At times there seems like little point in flogging a dead horse – even if dead horses can and are miraculously resuscitated days later.

Writing The Dramble would be far easier if I regurgitated and reformed already well-documented distillery histories. Or if I just presented tasting notes in isolation. But that has not been the modus of this site for many years now. And indeed, it is my own self-imposed standards for exposition which in turn produce the weight which then rests uneasily on my shoulders. In trying to do more, I sometimes end up achieving less.

But similar to a runner with cramps, often the only way to break through the barrier of a block is to keep going. To write through it. Even if you end up writing about something entirely unrelated to your usual output. Sometimes you'll produce a piece which makes sense. Others, just pure garbage. But the act itself ensures that the writing muscles have been exercised – and likewise the next day, when sitting down to start afresh, it helps to reappreciate that whisky as a field for writing offers an incredibly deep vein of mineable content.

Fear is the mind killer. And sometimes writing about whisky is sadly not as simple as ABC. Today we have another TWE exclusive single cask from the distillery’s second year of production. Sharing the same age as the suspected wine cask from a few months back, this bottling also comes from an unspecified cask type – however in this instance the profile is much more readily recognisable and is undoubtedly derived from sherry.

274 bottles were produced at 49.5% ABV and were available for £199 via The Whisky Exchange’s website. They all sold out rather sharpish – with the bulk shifting before TWE had even sent their usual promo email.

Nose: Immediate rich and polished fruits. Mirabelles, morello cherries and plums are lifted by candied orange peels and asides of dried mango slices. Very much as the intersection of darkness and light. Nutmeg, cinnamon and ginger and ground and then sprinkled over bundt cake, whilst currants and macerated in Armagnac and vintage fruit liqueurs. Dilution expresses hot house vines together with additional orange asides from tangerine and clementine. But the depth and complexity feel quite stripped away.

Taste: Considerably sweeter now. Cherries and berries lead – bright, fresh and quite verdantly leafy. Orchard fruits are revealed in the development – reduced and liberally dusted with dark sugars. Polished oak pushes through reflecting the age of the liquid, whilst chocolate-covered ginger pieces and a twist of pepper at a peppy, uplifting bite. As with the nose – the bottling strength here is well judged – and attempts to experiment proved to be a mistake, offering no enhancement, but rather a far muddier, less expressive composition.

Finish: Long. Still holding on rather vegetal fresh sherry with residue peppery char along for the ride until the very end.

This Arran 1996 24 year old TWE Exclusive hints at profound sherry through its nose, only to considerably lighten the affair with a palate that combines the trademark Arran spice with an assortment of juicy and leafy fruits. And that all works a treat as-is. Which is a good thing, as the bottling strength of 49.5% seems to be the lowest ABV where the liquid really shines at its best. Overall, I think I might just prefer last month’s wine cask edition.  <shudder> There must be something in the water?! 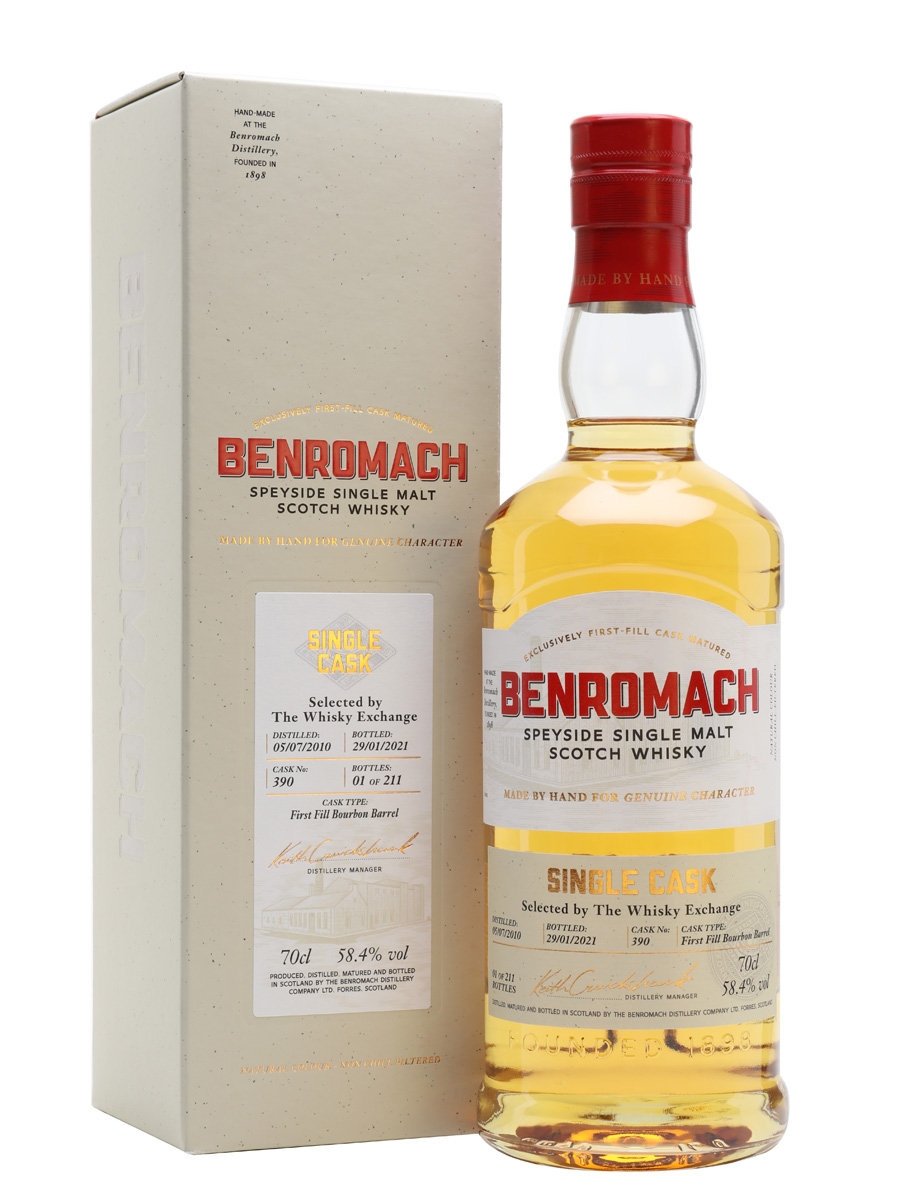 2010 vintage Benromach bottled after 10 years exclusively for The Whisky Exchange. 211 bottles resulting from a 1st fill bourbon barrel and clocking in at 58.4%. You can still pick these up on the TWE website for £79.95.

Nose: Placid wood smoke lifts stewed cooking apples whilst singed cloves and burnt edged gingerbread are combined with chocolate covered digestives and Viennese whirls. A sense of ‘meatiness’ runs throughout – spent cooking fats and beef dripping gravy. It provides a thought-provoking foil to the sweeter notes. The addition of water reveals a softer, earthier side with leafy greens and an aromatic wood influence from cedar.

Taste: Tart apple leads off before spiced chocolate – cinnamon and chilli – before unravelling into supportive earthy smoke and freshly cooked oven buns. A hint of salinity hides at the back, giving way to palpable ashy char. Reduction again soothes, resulting in a far sweeter palate which focusses on creaminess and a compote of fresh and cooked apples.

Finish: Medium in length and favouring the distillate with souring apples sitting before a final tingle of cask-led spice.

Exceptionally characterful Benromach that has been bottled at an optimum moment to allow the spirit’s personality ample room to shine. The result marries animated, bursting fruit with deeper, darker burnt flavours – and yet it never quite falls completely into the darkness, and manages to retain its elegance and a fresh, feathery refinement throughout. Simply a great cask. Highly likeable indeed. 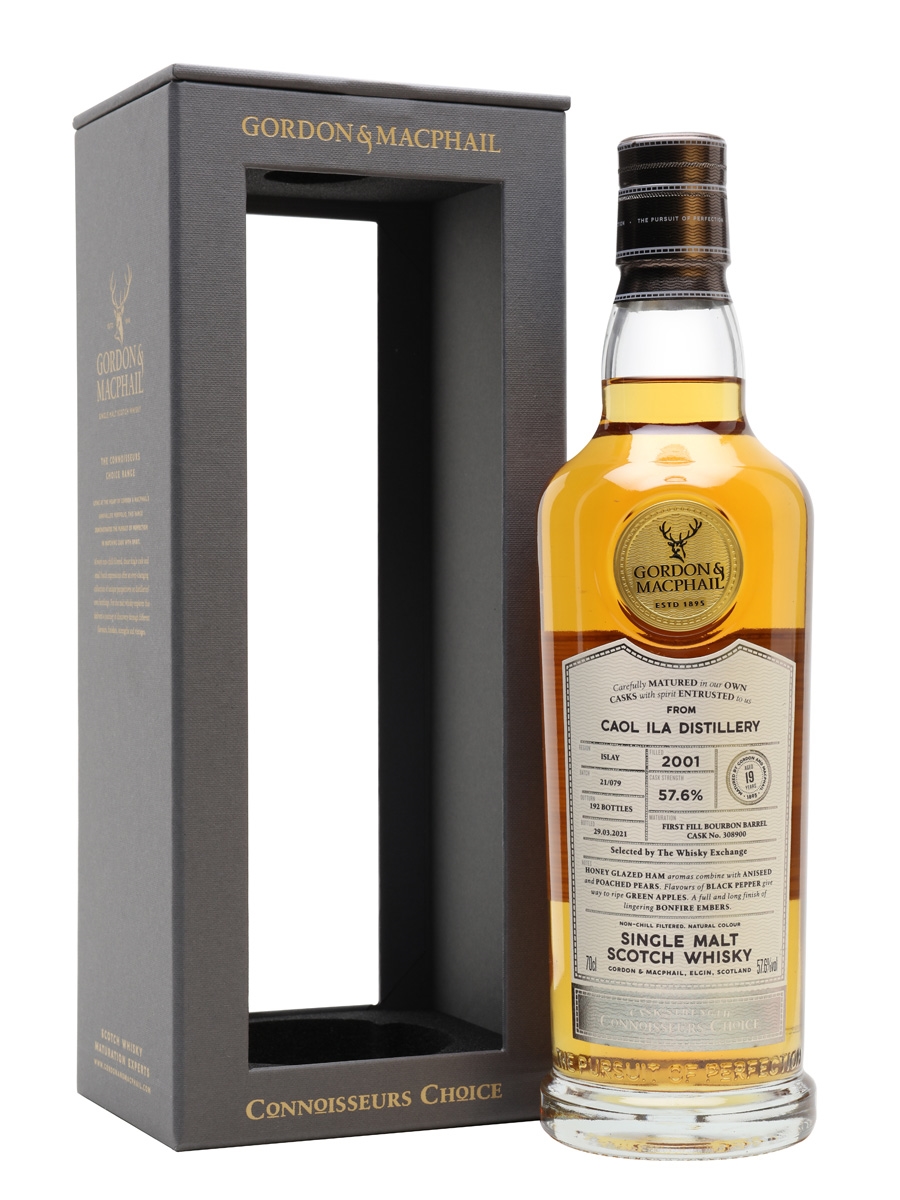 There’s always lots of indy Caol Ila floating around – but rather less of it is allowed to get to nearly 20 decades of maturation. This Gordon & MacPhail Whisky Exchange exclusive was laid down in 2001 in 1st fill ex-bourbon – with 192 bottles resulting 19 years later. Available from The Whisky Exchange for £175 a bottle.

Taste: Less expansive, but still with a journey to take us on. The arrival is rather chewy and sweet, offering smoked apples, pears and pineapple chunks together with an array of charcoal and canvas notes. The development brings considerably intensity with ashy fireplace smoke, a dusting of paprika and a generous grind of black pepper. Dilution reveals additional distillate sweetness from concentrated fruit salad cordial and touches of citrus oils.

Finish: Quite long and focussing on salt (saline), pepper and lemon-tinged apple slices.

Moving away from the growing tranche of younger (but still excellent!) Caol Ila’s that indy bottlers have been foisting onto the market recently – this TWE Exclusive G&M bottling offers something rather singular. The usual chiselled minerality, high impact lemon and medicinal peat influence have all given way to broader, more ‘grown-up’ up aromas and flavours. And the outcome is a most welcome departure indeed – offering high drinkability straight out of the bottle and an arrangement that works as perfectly as all Caol Ila’s tend to. Just a shame that the price feels quite the push.