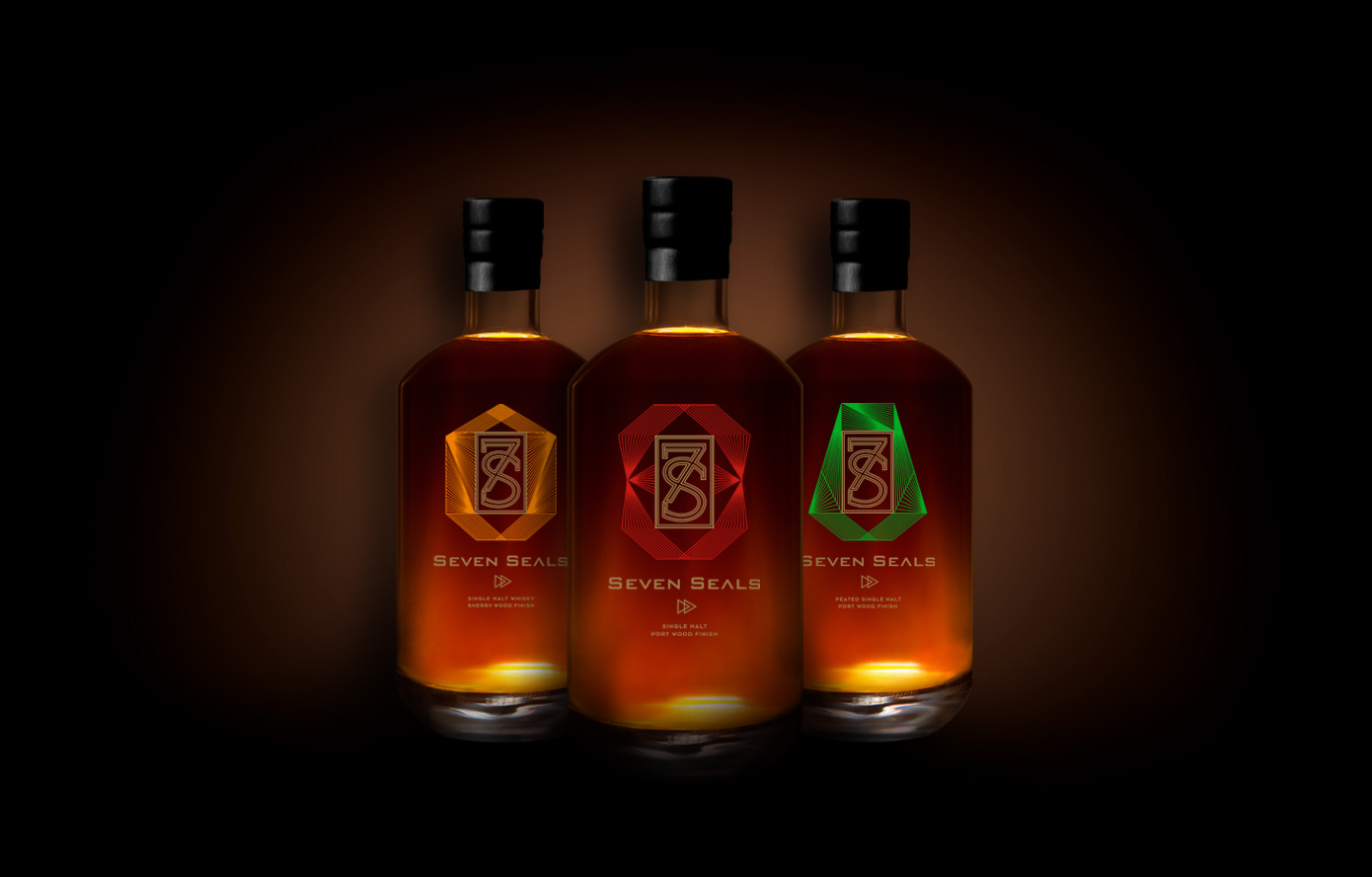 I would like, if I may, to take you on a strange journey. Our story begins with a bleak vision of the future of whisky. It is a world where the quality of whisky is ever declining. Where a bottleneck in the availability of high-quality barrels has met the perfect storm of an “almost ludicrous” level of demand for those same vessels. And where the only method for maintaining the quality of malt whisky is to look to “innovative alternatives”. Welcome to the world of Swiss bottler Seven Seals.

If you’re wondering why this somewhat dystopian view of the 21st Century whisky industry feels erroneous – that’s because it is. Throughout Seven Seals' wordy but largely hollow marketing spiel, there are countless generalisations about both the traditions of whisky production and its future trajectory – few of which are entirely as watertight as a perfectly coopered barrel.

Percentages of flavour absorption that oak imparts (an oddly low by cask marketing standards - 60%) are provided. Huge generalisations about sherry cask utilisation (“almost all of Spain’s sherry production is for the purposes of making malt whisky barrels.”) are made, which fail to note the fundamental differences between the production of sherry and the production of sherry casks – both of which are still big business. And vague suggestions are foisted that there will be changes in the legal system which will limit the procurement of ex-bourbon barrels from the USA. It feels almost cribbed from Billy Abbot’s 2014 TWE blog post –‘Dole out the barrel – Scotch whisky industry in crisis’ except without paying heed to the article’s publication date. The whisky industry cask shortage troupe is often rolled out by the media when they’re struggling on a slow news day.

Casks are a valuable resource. But then so too are the other components which are leveraged to create whisky. All of them have a degree of finiteness about them – and all of them present environmental impacts through their harvesting/collection. However, whilst environmental effects (drought, flood etc) will impact annual oak yields – and ergo the supply and therefore the price of oak – painting the situation as a caskpocalypse is to my mind a stretch. Particular when you get to the nub of what Seven Seals are proposing.

All of this setup (which you can read for yourself) is designed to get the reader to one final point of consideration - that whisky is facing a serious problem, but that Seven Seals have fashioned the answer to all of these woes. Irrespective of whether you believe in this conceit (and I’m suggesting that it’s not completely inaccurate, but equally it is also neither as precise nor as nuanced as the reality) – Seven Seals' solution to it isn’t really elucidated.

For all the talk of acquiring high quality casks – the bottler doesn’t pin its colours to its ability to source the best wood, but rather goes for an ambiguously explained suggestion of accelerated maturation. The blurb denotes the use of “heat, high pressure and various mechanical influences” to “accelerate the flavour absorption process in the barrel”. And that’s all very well and good – I’m fairly indifferent to exploring experimental maturation techniques – indeed, some results such as those from Lost Spirits are honestly impressive. But at the same time, Seven Seals fails to make any linkage between accelerated maturation and how this will actually solve their suggested global cask shortage.

Simply speeding up maturation to get casks back into circulation quicker fails to take into account the life cycle of a cask – both its diminishing activity and its diminishing stave strength. More fills = a shorter timeframe before cask death. It also eschews the market – consumers still want and likely always will want some of their whisky to be out of nappies.

Speed alone can’t resolve a perceived shortfall. But are we really to believe that after X number of fills, the answer to knackered wood isn’t a rejuvenation programme, but rather a warmed hyperbaric chamber and a whisk? Accelerated maturation outside of its experimental aims seeks to get product to the market quickly and, over the longer term, cheaply – to imbue a spirit with more flavour and quality than it would have taken on alone in a similar time frame. As far as I’m aware it does not inherently affect the quality of the cask itself – merely the reactions which take place inside it.

Regardless of your views of accelerated maturation – one has to imagine that the end results will be better from superior wood rather than from duff casks. Ergo, high quality casks are still a requirement for whatever processes Seven Seals are utilising.

And I say “whatever” because the level of transparency that Seven Seals provides is notably poor. On the one hand, the company has indicated that they’re looking into trademarking the IP for their mysterious process so don’t want to let the cat out of the bag – and that’s totally fair enough. But on the other – the level of information provided to the drinker about what they’re actually drinking, where it comes from, how its been composed and delivered to them is virtually non-existent. As you’ll note from the two reviews below, there’s very little to go on.

This level of obduracy to provide a bare minimum of useful info beyond those that are legally required, far from presenting Seven Seals as an innovative, future-looking brand, to my mind achieves the opposite. Consumers are becoming more knowledgeable - not less. Consumers are demanding more transparency – not more opaqueness. Of course, your mileage may vary and it’s important to recognise that there’s still a certain proportion of whisky drinkers who judge the book by its cover alone. But to this marketeer’s mind – this muddy approach feels stuck in the whisky time warp.

And crawling on the planet’s face, some insects called the human race.

And lost in space…and meaning.

OK so onto the reviews. I’m sure you’re all shivering in antici…pation.

There’s sadly little to say about this release from Seven Seals save for the fact that it’s composed of “….different malts from the same distillery” and that it has been finished using port casks. Oh, and possibly some type of accelerated ageing – possibly not – there’s nothing really to say either way from the bottle alone.

In the UK, it’ll set you back £65.95 from Master of Malt for a 50cl bottle. Though it is worth nothing that the use of “Cask Proof” as a descriptor might well confuse. Various retailers list this as a cask strength expression – though when you look at the wider Seven Seals range, you’ll note the ABV of 58.7% is exclusively utilised for all of their higher strength expressions. Unless there’s some incredible warehousing going on, I’m going to call this as not cask strength in terms of the legal definition of the term.

Nose: Immediately heady with port wine – fresh and reduced red and black berries,  strawberry chews, rose hips and a scattering of potpourri. The youthfulness of the liquid is apparent with PVA craft glue, whilst prominent herbalness from pesto is joined by sage and pink peppercorns. Running throughout – cinnamon and a peculiar unspecified meaty note – akin to a red wine reduction packed full of stock. The addition of water adds a ‘dampness’ with ozone, old socks and wet cardboard together with freshly planed oak.

Taste: A fatty texture with good weight. Burnt chocolate with blackberries, blackcurrants, redcurrants and hawthorn berries alongside spent coffee grounds, reeds, flax and fern. An abundance of wood runs alongside – sappy, near ‘green’ oak that’s immediate tannic and grippy. Brass piping and fermenting wash lurk in the background – somewhat masked by the overwrought port influence – but still palpable. Reduction adds much more chocolate into the mix, together with toasted cereals and pine-driven, herbal port.

Finish: Medium – quite raw with spirit and overt port influence.

Whilst there’s nothing inherently wrong here – there’s equally nothing to get excited about. Young spirit drowned in port wine to mask its obvious youth is about as subtle as a brick to the face. The underlying spirit seems OK but once saturated in port this feels less like accelerated maturation and most like sheer heavy-handedness. Obviously if you're into manifest port influence you might enjoy this a whole lot more that I did.

A mysterious single malt from Seven Seals that’s presumably been matured in two types of casks. As to what casks – that’s anyone’s guess. Seven Seals remain tight-lipped on providing information on how their expressions have been matured – and they’re seemingly equally as tight-lipped on letting us know what Double Wood means in the context of this expression. A 50cl bottle will set you back £65.95 from Master of Malt.

Nose: Minerality and coastalness is up first – rocky outcroppings, smoothed pebbles and hewn granite. Then it’s a trip to the farm with barnyard, pig sties and a manure pit. Sweet soapiness follows together herbal asides of fir, pine and bituminous peat smoke. Dilution offers discernible calamine lotion together with sticking plasters, floor cleaners and a bowl of prawn crackers.

Taste: Wild honey and golden syrup sit with BBQ briquettes, coal dust and forest-style vegetal peat – smouldering bracken and bonfires of leaf mulch. Cask influence is high with both black and Szechuan pepper together with cloves and mentholated oakiness. The addition of water presents mossy undertones with sweeter malts and less overt smoke alongside cask vanilla and a handful of gravel.

Following a nose that is best described as ‘dung-inbued’, the palate of this Double Wood Peated Seven Seals is more successful, offering both sweetness and peatiness together in some abundance. However, similarly to the Port Finished Seven Seals, once again the composition feels like both the cask and the precursor flavouring (in this instance – peat smoke) are being utilised to shroud the qualities of the spirit. Peat smoke is a very effective tool for hiding a multitude of sins – and there’s an awkwardness here (particularly on the nose), that makes this hard to comfortably recommend.