Sherry and spice and all things nice 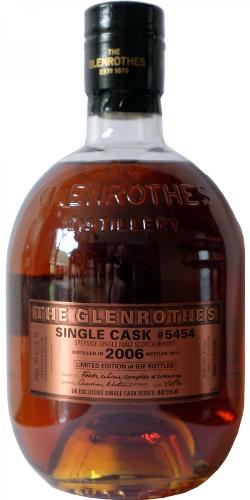 In May of 2017, The Glenrothes was bought back by its previous owner Edrington. Berry Brothers & Rudd had owned the brand since 2010, when a deal was struck with Edrington which included the sale of the popular, high volume blend Cutty Sark. Fast forward to the end of 2017 and Edrington are already doing exactly what they intended – fast-tracking the distillery’s output into single malt production to raise its visibility and sales growth worldwide.

Whilst Edrington look raise the profile of Glenrothes overseas, those based in the UK have not been ignored  - towards the end of last year, a selection of Glenrothes single casks were released exclusively for the UK market. The expressions all had two things on common – firstly they were all drawn from oloroso sherry casks – secondly, the bottling strengths were hefty to say the least. We’re taking a look at one of the most explosive of the recent releases: sherry cask #5454 which yielded 636 bottles and has been bottled at that volatile ABV of 67.2%.

Nose: Fresh but fiery. Sherry influence is huge, but still ripe and fresh for the most part, with bright berries, cherries and orange peels. Toffee, butterscotch, honeycomb are joined by darker sugar flavours – demerara sugar and burnt caramel. In the background there are hints of cigar box and lightly tanned leather. Spicing is quite pronounced – ginger and cinnamon. The addition of water brings out some natural earthiness and some hazelnut nuttiness.

Taste: Taken at full strength this is big and ballsy. Viscosity is high and whilst it is undeniable aggressive, I’ve had less palatable arrivals at far lower ABV’s than this. Rich berries again with deep chocolate, roasted coffee and burnt toffee and joined by high level spicing – particular pepper, but with ginger still along for the ride. Water is pretty much compulsory for this one and has a positive effect all round – increasing fruitiness to bring in stewed apples, orange marmalade and berry compote. Structurally things are more subtle now – and therefore a level of general drinkability is easily reached.

Finish: Long and whilst initially rather aggressive, when diluted brings with it a lovely selection of oak influence, pepper spicing and citrus peels.

This Glenrothes single cask starts off huge and powerful – a sherry bomb with the explosive strength to back up the claim. Whilst you could, notionally drink this at its original brutish strength, a little patience (and certainly water) reveals something deeper and more complicated inside. This one has flavour and intensity in abundance.