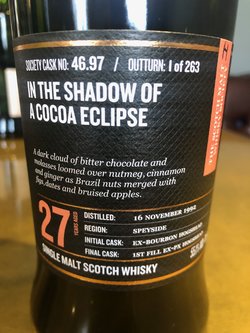 Bottle Name: 46.97 In the shadow of a cocoa eclipse

I’ve a lot of time for well-aged Glenlossie. This example has spent 26 years in an ex-bourbon hogshead before being re-casked into a 1still fill Spanish oak PX cask for some additional maturation.

Nose: Intense and rich with dark chocolate covered cherries, plump raisins and cinnamon swirls sitting alongside crystalline ginger and touches of sherry rancio. Running throughout – sticky toffee pudding, treacle tart and maple syrup together with a slice of coffee and walnut cake. Diluted, the ex-bourbon hogshead moves more to the fore with lacquered wood panelling, chopped almonds and a grating of nutmeg.

Whilst I usually prefer my middle-aged Lossies drawn from refill ex-bourbon, here the imposing PX finish has resulted in something rather unctuous and decadent. Arguably there’s a lot of active sherry influence here and as a result, the spirit has been somewhat subsumed – but the result is still largely focussed and above all else simply quite tasty.