Glenlivet Code follows on from similar mystery expressions Alpha (2013) and Cipher (2016) in that the whisky is presented without any cask information or tasting notes. Indeed, even the bottles from this ongoing series are presented in opaque black glass to hide any preconceptions around the colour of the liquid. The only information provided is the ABV of 48% and the price - £99.95 from Master of Malt. That said, if you think about the wider whisky market, you’ll find plenty of NAS bottles where behind the glossy marketing there’s a similar impervious lack of information, so at least Glenlivet are providing an element of fun with it.

Like previous editions, Code comes with a digital challenge – an interactive microsite that challenges you to ‘unlock the taste’ of this unidentified whisky by indicating both the dominant aroma and flavour characteristics – whilst also specifying their prominence (four aromas for the nose, four flavours for the palate). It’s a neat idea and frankly far from easy as you’ll see from my decoding session below…. 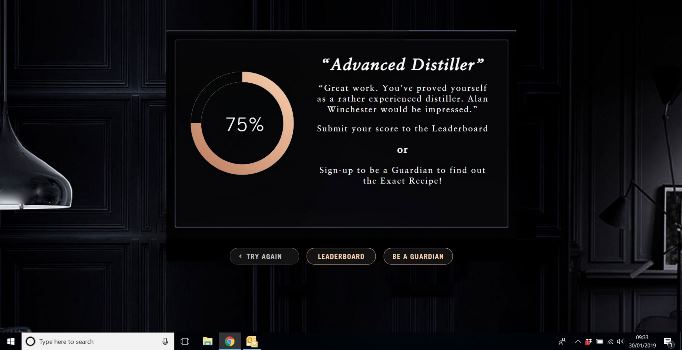 Olfactory systems and palates vary greatly - indeed, I read some new research yesterday which suggested that the female olfactory system is developed to such an extent (over that of men) that tulip shaped glasses were felt to be disadvantageous to them. Interesting. I digress – breaking Glenlivet Code is not about trying to accurately calculate/guess a correct answer – in essence you’re simply attempting to match someone else’s (Master Distiller Alan Winchester) interpretation of aromas and flavours. Likewise, the actual options presented when cracking the code are part canny, part frustrating – both apple and pear are presented in the same ‘module’ – you can only pick one, but I detected both. Decisions, decisions. Nevertheless, the experience is quite fun, and, it might get a few usually non-analytical drinkers thinking more about the contents of their glass which would be no bad thing.

Taste: The arrival has body and plenty of fruit-forward character – orange first – juicy and zesty, followed swiftly by fresh apple and spit-roasted pineapple. Everything is bright and zingy, with a great balance between sweetness and sharpness. Once again, fruits are supported by heady spicing – ginger, nutmeg and cinnamon. The back-palate reveals a more oaky side, and has a pleasant progressive dryness. The addition of water turns the spice levels down a notch, highlighting tropical flavours of banana and mango, whilst revealing some milk chocolate and vanilla cream.

Finish: Medium in length with apple sweetness tempering the drying oak and its ginger/nutmeg spiciness. Reduction here brings out some tart lemon curd and vanilla custard.

Glenlivet Code is a well-composed, well-balanced whisky that still retains a discernible level of distillery character. Whilst the actual cask composition remains a fun mystery, from my experience with it, I’d not be surprised if there was a parcel of madeira cask maturation here (zesty orange aromas/flavours), built on a base of 1st fill ex-bourbon (bright, ripe orchard fruits). But, regardless of any online codebreaking, this bottling stands on its own merits as a tasty extension of the Glenlivet range.

With thanks to John Watkinson (@jwbassman_)