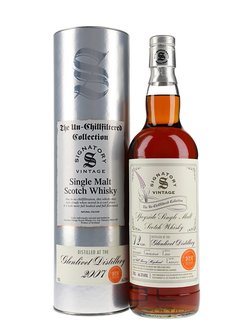 There’s a world of difference between someone who enjoys an occasional dram down the local boozer at the end of a long week and someone who self-identifies as a whisky devotee. A wider level of experience, a (sometimes) deeper level of knowledge, and more than likely - an innate proclivity to discover the outer limits of aroma, flavour and intensity. Nowhere is this penchant for discovering powerful (sometimes outlandishly so) whiskies more visible than with the appreciation of peated and sherried whiskies. Whilst the two styles can often be disparate (but equally highly sought after when combined) – their modern renderings provide enthusiasts with exploratory temptations – How intense and concentrated can flavours be? How peaty can it get before it’s repellent and/or a phenolic health hazard? How heavily sherried can a whisky become all semblance of the distillate is lost behind a wall of sweetness and wood tannins? And do you even care, so long as it’s as dark as pitch?

To newcomers, the allure of ‘monsters’ and ‘bombs’ is tangible. The Internet is awash with folks on less than subtle journeys into whisky’s darker corners. Peat freaks circle like vultures around PPMs – present one of them with a smoky whisky and it’s invariably the first question to be asked. The larger the figure the higher the expectations. But sherry lovers don’t have the luxury of a single number with which to judge the intensity of their rich and fruity whiskies. And so, they by and large fawn over the darkest hues, with only a few appreciating the realities of the poor link between colour and flavour intensity and, in particularly – quality.

The attraction of sherried whisky is relatively easy to comprehend – it imbues the spirit with darker colours and lusher, sweeter flavours – thus creating a liquid which both looks and feels like an opulent digestif. And look and feel is certainly important to some. The marketing of sherried drams has played off this sense of seeming lavishness for decades – sweet tooth’s have done the rest. But similarly to its peated cousin, sherry’s influence can be used to mask a variety of sins – of both age and of the spirit itself. Further – many whisky drinkers turn to these styles because of their tendency to disguise. Whilst sherry can undoubtedly offer stunning intricacies, it can also be used as sledgehammer, disguising the profile of the distillate and presenting the imbiber with little more than the fortified wine itself. And to some, that’s simply their preference – they want the richness and sweetness of the sherry above all else.

The advent of the ‘sherrybomb’ goes back far longer than any of us have been cogitating it – heavily sherried whiskies have been produced for centuries. But the term itself is a product of the last decade – as is the tendency for this style of whisky to be pushed to its extremes through the use of fresh, saturated 1st fill casks, which sometimes has one wondering quite how well they’ve been flushed out prior to refilling. And yet, to the newbie, commencing their whisky journey, sherrybombs are often positioned as both some kind of pinnacle of whisky and also a challenge to be conquered.

We should not be overly surprised by this - all enthusiasts across all hobbies possess a similar fondness for exploring the boundaries of their passions - the fastest, loudest, biggest, heaviest, quickest, trickiest. Ever.

Sherrybombs often err towards these extremes – of packing in as much aroma and flavour (usually in the shortest amount of time possible) and of playing to the loudest, biggest, heaviest crowd. But exploring their traits *is* an important rite of passage. It is only through discovering the outer bounds of sometimes brutalist aromas and flavours that we’re able to appreciate the sophistication and intricacy of balance.

That is not to say that all heavily sherried drams should be considered as aberrant – or a mere transient diversion. Far from it. There are plenty of outstanding examples where the spirit, wood and fortified wine have married into an enhancing equilibrium. And to my mind, it’s those sherried whiskies which are well worth exploring even after the magnetism towards the extremities has long faded. Hopefully you too will find out how deep the rabbit hole goes, but in doing so, will decide to re-emerge all the same.

Today’s review bottle comes from the never-ending TWE 20th Anniversary – which might possibly only cease when the retailer reaches its next milestone of a quarter of a decade. If only my birthday celebrations extended this long (note to self, talk to the wife about an impending and elongated celebration of Matt). This 2007 Glenlivet certainly fits into the theme of highly sherried whiskies. Indeed, bottler Signatory seems to possess a healthy stock of these high ABV, high impact sherrybombs – which have been coming onto the market, and not sticking around all that long, since around 2017. TWE have nabbed a fair few of these casks and this latest expression treads a broadly similar path to previous heavily-sherried Glenlivet releases – only it does so with both more poise and more aplomb.

Distilled in 2007 and matured for 12 years in a first fill sherry hogshead – the hue of this Glenlivet doesn’t alone reveal the true intensity of the whisky – once again demonstrating that colour, by itself is not directly correlated to flavour (I’m never going to not keep saying this). 309 bottles were produced at an ABV of 66.2% - released last week, they’re still available directly from The Whisky Exchange for £99.95.

Nose: Heavily reduced blackberries and cranberries present as a syrupy preserve alongside currants and plump raisins. Drinking chocolate and rich cake are joined by fragrantly spiced oak – plenty of cinnamon and plenty of dark wood panelling. On initial pouring - a palpable boozy edge, but quickly relaxing in the glass into an inviting, whilst still intense conglomeration of dark fruits and dark wood. Reduction will likely be required (keep reading) – and indeed it offers a much brighter and fresher sherried complexion – ripe strawberry coulis and raspberry cordials alongside suede and chamois and over-baked cookies.

Taste: The arrival is intimidatingly large – an all-out assault that makes first sip impressions impossible to fathom beyond a recognition of the sheer concentration of flavour and alcohol that this whisky possesses. A viscous texture and a delivery of reduced fruits and rigorous spicing is first up – cranberries, redcurrants and blackberries (with some leafiness along for the ride) all heavily macerated and dusted with cayenne pepper and powdered green chilli. Sweetness pushes through next with fig rolls, currant buns and ground chocolate, before an escalation of pepperiness and mentholated oak builds into a warming, leafy, minty combo. The addition of water is going to be a necessity for many – but whilst it’s always worthwhile trying a whisky as presented, this Glenlivet is happy to quickly reveal is softer, cuddly side. Velvety and approachable with soft, ripe, juicy berry fruits, creamy Eaton mess, milk chocolate and liquorice sticks.

This TWE Exclusive Singatory Vintage Glenlivet is a real Dr Jekyll and My Hyde. Out of the bottle Hyde is a hulking, audaciously intense bomb that somehow still manages to present a huge sherry influence without becoming either overly dry, not appreciably tannic. Diluted, Dr Jekyll is immediately softer, more affable and frankly downright huggable - offering delicious, fruit-focussed sherry notes without the spikier personality. Plainly located at the sillier end of the sherried spectrum, but a highly enjoyable ride nonetheless - if you’re looking for supersized sherry, both sides of this split-personality are well worth getting to know.