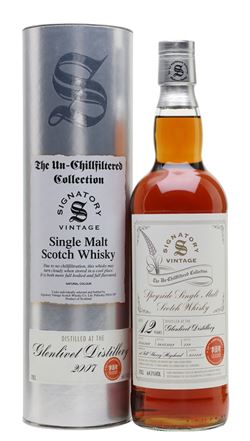 There’s been a handful of heavily sherried high octane Signatory Glenlivet’s over the last few years.  This 2007 12 year old is the next of them. Drawn from a 1st fill sherry hogshead (#900216) after 12 years of maturation and bottled at 54.1% ABV. Available from The Whisky Exchange for £89.95.

Taste: Everything as expected - a riotous arrival of intense richness. Heavily reduced berries – down to jams and preserves - alongside toffee apples, leafy resinousness, hazel and walnuts. Spiciness is heady with a building wall of pepper, cinnamon and ginger, whilst light tar and balsamic sit with underlying honeysuckle floralness. Reduction adds golden syrup and soft nougat as well as burnt maple and allspice. The attack is restrained – it’s powerful, but not quite all sherry-hostility now.

Finish: Long, with nutty sherry (cashew and hazel), fading demerara sugars and pepperiness. There’s a fair whack of oakiness at the end – very drying, rather tannic.

This 1st fill sherry Glenlivet can’t decide whether it wants to brutalise you or give you a hug. It ends up doing both. The sherry and cask influences are both intense, resulting in a rich and punchy whisky with an abundance of pronounced, concentrated aromas and flavours. But, the sweetness and opulent fruit combinations just about manage to keep things on the side of firm cuddle. If you’re a sherry head - just go at this straight, however, to my palate, this works even better once tamed with a few drops of water.