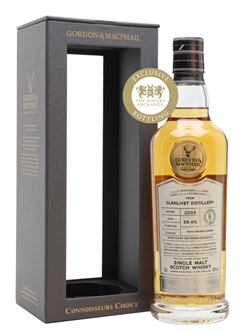 The first of two TWE exclusives released just before Christmas 2018 is a refill ex-bourbon Glenlivet. Distilled in 2003 and then matured in a single cask for 15 years, this was bottled by Gordon & MacPhail under their Connoisseurs Choice range. 176 bottles at 59.4% have been produced and are still available (as of writing) from The Whisky Exchange for £99.95 a pop.

Nose: Fresh orchard fruits are up first with Granny Smith apples and Conference pears – deeper, both of these become embroiled in patisserie – apple crumble and pear tart. There’s a tangy citrus bite running throughout – candied orange and lemon peels with some milkier aspects of curd pie and Chantilly cream. Cask influence is never too far away, and presents with some typical ex-bourbon notes of vanilla custard, and prickly pepper spicing. Reduction unleashes plenty of natural sweetness – barley sugars and buttercream frosting alongside baked biscuit crumb.

Taste: Crisp and lively with the associated viscosity one would expect from the ABV – a mouth coating arrival with zingy tart fruits (grapefruit and lemon sherbet). The development them moves to the orchard with apple and pear – fresh and ripe – before heading caskwards with drying peppery spice, aniseed and cask char. The addition of water softens both the bite and the zing, offsetting some of the sparkle for deeper maltiness with rolled pastry and biscuits alongside some underlying grassiness.

This TWE picked Connoisseurs Choice feels archetypal Glenlivet in character. Whilst straight-forward and seemingly rather naked, orchard fruits and critic zing offer a crisp canvas for cask influenced spices to deliver plenty of animation. The end result is humble , but at the same time sprightly, clean and still rather vibrant.