Ex-bourbon to the max 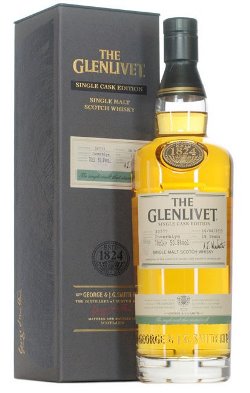 Glenlivet was the first distillery to take out a licence after the 1823 Excise Act became law – a milestone which marks the official starting point for the modern whisky industry (and a move away from illicit distilling). The initial success of Glenlivet resulted in many other distilleries adopting the name ‘Glenlivet’ as a prefix to their own distillery name in an attempt to muscle in on the success of the brand. After much legal wrangling, a compromise was found – whilst other distilleries could still use the prefix, only Glenlivet could call itself ‘The Glenlivet’.

Now owned by Chivas Brothers, the distillery capacity has expanded dramatically to 10.5m litres per year – as has the range of whiskies now available. From a well-established core range that now includes a 25 year old (XXV) through to the cask strength Nadurra expressions, Chivas clearly have big plans for the Speyside distillery that expand well beyond the bounds of Scotland. A range of occasional single cask have been released steadily over the past few years, some of them releases (Watercairn, Fore Burn and Tarland) specifically designed for overseas markets such as Taiwan and Hong Kong.

I attended a Guardians (Glenlivet’s members club) tasting a few weeks ago which focussed on some of the distillery’s single cask releases. One of the tastings was for the Glenlivet Inverblye (named after a nearby farm) an 18 year old ex-bourbon expressions bottled at 50.8% and drawn from cask number #30777.

Nose:  Undoubtedly ex-bourbon – big vanilla, coconut and butter cream right from the off. A fruit medley of tart apple, grapes and pineapples – some fresh, some baked. A light nuttiness and breadiness both sit in the background.

Finish: Medium and once again going 100% ex-bourbon with vanilla and wood spices.

Glenlivet 18 year old Inverblye is straight-forward but boldly flavoured. The higher strength helps deliver good clarity of flavour – and those flavours are full-on ex-bourbon, so if you’re not a fan of big vanilla look away now. Those who do favour this style will find an agreeable well-constructed whisky, though even then the experience doesn’t come cheap - £185 on Master of Malt.